One thing I have learned this past week is that gigs in the US and the UK run on different time-scales. Whereas our American cousins like to start late and run long, more and more I’m seeing British gigs start early and run to a merciless time-scale.

I’m also seeing more and more shows without an “opener”, as such, relying on the main bands to provide all the necessary draw (a decision which makes clear sense in a lot of ways, as tonight’s sold-out crowd demonstrated).

Case in point – tonight’s doors opened at 7:00, and Chthonic hit the stage at 7:30 on the dot, proceeding to pummel us all with 30 minutes of streamlined melodic black/death metal, augmented by oriental keyboard orchestrations and some righteous Taiwanese ire. 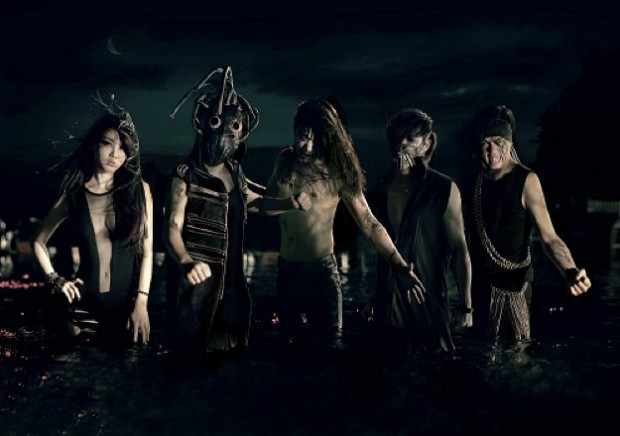 From the moment the band hit the stage all eyes were drawn to one figure… no, not the alluring form of bassist Doris Yeh, but the incredibly WTF appearance of keyboardist CJ, whose ostentatious headgear made him look like a fetish-themed Predator. Distracting, to say the least.

A gargantuan “Oceanquake” opened the set, quickly followed by a high-energy blast through “Supreme Pain For The Tyrant” (with its vicious final vocal refrain) and then the heaving riffs and twisted tremolo runs of “Sail Into The Sunset’s Fire”.

The band as a whole are a tight and well-oiled machine these days, highly professional and incredibly focussed. Yet in stepping up their game in this manner the band have… maybe… given up a little bit of what made them special. Freddy’s furious, throat-shredding shriek has certainly lost none of its bite, but there’s something ever so slightly safe about their live show. The band’s growing popularity has both positives and negatives it seems.

Still, a good show. Not a great show, but certainly a good one.

Before taking time off (almost five years in fact since The Age of Nero was released), Satyr had been stating in interviews that he had become wearied and disillusioned by the endless album/tour cycle required to maintain their position at the top of the Black Metal mountain, and that he was taking time away – retreating into privacy – to rediscover the fire that once drove him.

At Inferno earlier this year we got the first hints that this quest had been successful. And tonight, in front of a baying crowd, the journey was complete.

Beginning with the grim dirge of “Voice of Shadows” before diving headfirst into the rampaging maelstrom of “Hvite Krists Dod”, we were treated to an absolute masterclass of black fire and fury, mixing malevolent groove and majestic melody with injections of blistering venom.

Satyr himself seemed incredibly at ease in his own skin, gratified by the rapturous response, yet oddly humble at the same time. Swaggering, yet softly-spoken. Dominating yet debonair. A compelling contradiction indeed.

Backing him up behind a frankly monstrous drumkit, Frost remains an almost inhuman machine, the black metal equivalent (at least!) of Dave Lombardo, capable of turning even the simplest beats and fills into something mesmerising.

Tonight was my first chance to hear the new material in the live setting, the band airing four tracks from their self-titled album to a crazed response from the sell-out crowd. The rolling thunder and haunting melancholy of “Our World, It Rumbles Tonight” delivered dark and storm-tossed grooves a plenty, while the blood-pumping run-through of “Nekrohaven” whipped the crowd into a head-banging frenzy.

The blackened Sabbath of “Nocturnal Flare” has quickly become an unexpected anthem, while “The Infinity of Time and Space” (described by Satyr as the song which most embodies the spirit of the new album) saw the newly reworked live line-up of the band weaving a captivating and nuanced spell of majestic grace and slow-burning wrath.

Every song unleashed over the course of the band’s set – over an hour and a half of focussed ferocity and primal power – delivered a killer punch, but some personal highlights for me (not counting the awesome new material) were the aforementioned “Hvite Krists Død”, an unexpected appearance of the black/thrash/groove hybrid of “Possessed”, and a hypnotic, menacing rendition of “To The Mountains”.

Things culminated with a triple-headed encore of “Mother North”, “Fuel For Hatred”, and “K.I.N.G.” – three of the band’s most defining songs – which left the audience practically gasping in ecstatic rapture. I really can’t describe how manically dedicated the band’s fanbase is, or convey just how deep a chord these songs touch in their audience.

But this was more than just a fantastic show, it was also an incredibly enlightening one.

When I reviewed the new Satyricon album, I made mention of the oddly melancholy tone of the songs. Part of me was concerned that lines like:

The stage is yours

I can no longer rule”

. . . reflected perhaps a sense of ennui and dissatisfaction within the band. At times I wondered if it were even signalling their impending dissolution – a worrying thought considering the 5 year break between albums they had just taken.

Yet now I think my fears were unfounded. I misinterpreted what the band were trying to say. But now I understand.

Like it or not, Satyricon have dwelled at the top of the Black Metal mountain for a long time now. And they’ve grown tired of it. When they say “I can no longer rule” they’re simply saying they have no longer have any desire to defend a gilded throne that brings with it only empty accolades and artistic restrictions. It’s not the voice of weariness talking, it’s the voice of wisdom.

When Satyr describes “The Infinity of Time and Space” as perhaps the most defining statement on the new album, it’s clear that the band have spent their years wandering the musical wilderness searching for a way to redefine their sense of self and purpose. The first lines themselves:

“Take me down to the core

Of the innermost deep within (myself)

Show me and help me capture

The seed of my existence

And understanding of my purpose”

. . . seem to make this incredibly obvious, and I’m shocked that I missed it. They reflect a band searching for something, searching for themselves.

Looking at the band this evening – reinvigorated, revitalised, reborn – it’s clear that their long journey was worth every hard fought battle and moment of self-doubt. They no longer have anything to prove. Let new contenders fight for the crown, and bear its pressures and its burdens, ‘til they too understand how hollow it all is. Satyricon have chosen their own path once again.

Black Crow on a Tombstone

Our World, It Rumbles Tonight

The Infinity of Time and Space