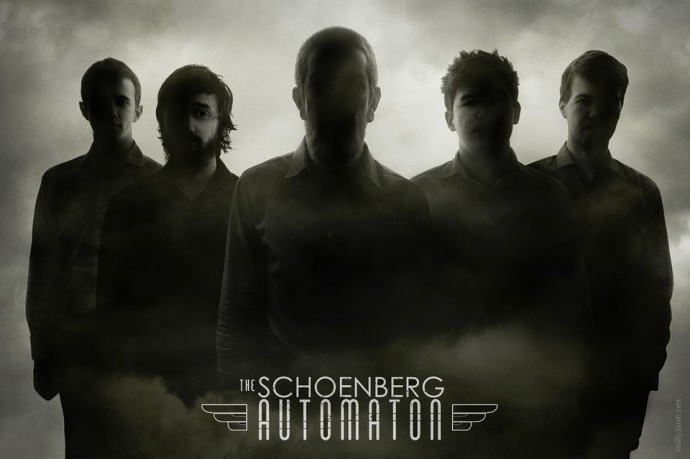 (NCS contributor Austin Weber brings us two videos, one that just appeared and one that’s older, from Australia’s The Schoenberg Automaton.)

Lyric videos in metal trend are rarely done well, as the majority of metal bands have terrible/boring/cliched/wordy-but-goofy lyrics. In some cases viewing a lyric video has made me like songs less, as I’m forced to focus upon cringe-worthy words that are otherwise easily ignored when listening to the music. I say all that because The Schoenberg Automaton just dropped the greatest lyric video I’ve ever seen, for the song “ULTIMATEWHIRRINGENDMACHINE” from their Vela album; it’s practically a music video.

I enjoy their lyrics, as they are often atypical of metal and/or they put a great spin on lyrical tropes. Tracks such as “Arecibo” are rife with painful observations such as, “We are losing the connection with our natural world,” and that lyric has parallels to the apocalyptic themes found in “Ultimatewhirringendmachine”. Included below, along with the new lyric video, is a well-shot horror-themed music video for “A Stone Face Of Piety” that’s been out for a while but I forgot to post about it. I particularly love that they draw you in by giving the story a start before the song kicks in, and that not a moment of it consists of performance footage.

If you haven’t check out Vela yet, you are missing out on unfathomable awesomeness. It’s available on Bandcamp via the link below.