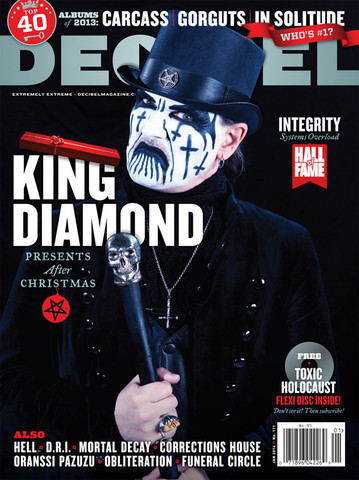 There it is, the cover of Issue #111 of DECIBEL magazine, with a cover date of January 2014, because how in good conscience could you create a list of 2013’s best albums before 2013 is actually over?

Ha!  I kid. I take this shot every year — but I’m only half-kidding. I do wonder what would be wrong with having all Best of 2013 lists appearing in January 2014 instead of November 2013 when those poor bands whose albums were released in the last quarter of the year simply get overlooked in the year-end chase. But that’s not the way the world of metal journalism works. We start seeing year-end lists now, and we talk about them even if they’re a tad premature.

DECIBEL’s list of the year’s Top 40 albums appears after the jump. As you may have read already, the comeback album by Carcass got Album of the Year honors. And Tribulation and In Solitude are in the Top 10, along with Gorguts and Inquisition. But Melt Banana and SubRosa are in the Top 10, too.

I mention those last two bands only because I’m surprised, not because I’m putting down the choices, because I haven’t heard either one of those releases yet.

Other interesting choices: Cult of Luna and Darkthrone are in the Top 10. I did hear those two albums and liked both of them a lot, but I didn’t expect to see them placed this high on the list. I did expect to see Deafheaven in the upper reaches — what an enormous breakout year 2013 has proven to be for that band, riding the waves of Sunbather and it’s huge crossover success.

But holy shit, Lycus and The Ruins of Beverast are in the Top 20 too! Absolutely well-deserved, but I didn’t see that coming. Giving bands like those such prominence is one reason I don’t think any other print zine comes close to DECIBEL

As has been true of every one of these lists since I began reading the magazine long ago, I respect their choices even when I don’t agree with them.  It’s an eclectic line-up and it’s clearly not designed to blow smoke up anyone’s ass. It digs pretty deep underground for most of these picks. And in a rare stroke of chance there’s only one other band on this list whose album I didn’t hear: Purson.

Bottom line, I really do think this is a very solid list (putting to one side the three albums I haven’t heard). If it’s subject to quibbling, it’s because they left out albums that some fans (including me) will think deserve to be in a Top 40 list for the year. But the albums on there that I’ve heard are really good. If you’re looking for a menu of 2013 metal to check out, this is a very good place to start.