As many of you know, NCS writer Andy Synn is the frontman for a UK band named Bloodguard — or rather they used to be named Bloodguard. As of today, the Bloodguard name has been laid to rest. Henceforth, the band shall be known as Beyond Grace. And in addition to spreading the word about that change, we’re delighted to bring you the intergalactic premiere of the band’s new video for the song “Panopticon”, which is also being released via Bandcamp as a single.

But before premiering the video I’m going to turn this post over to Mr Synn, who explains the name change, future plans for the band, and other news. — Islander

So… where to start? The decision to change our name was not an easy one to make. We realise it comes with potential costs, but it also has a host of benefits we just couldn’t overlook.

Why the new name? A lot of reasons really. The old one doesn’t really suit us anymore, it fits awkwardly in some ways, and is surprisingly hard to get people to remember. Whereas the new name suits the lyrical direction – more socio-political, more transhumanist – and the new sound of the band – heavier, more technical, more death metal – much better.

Plus it sounds way cooler when you growl it onstage.

Bloodguard is no more… Beyond Grace is born. 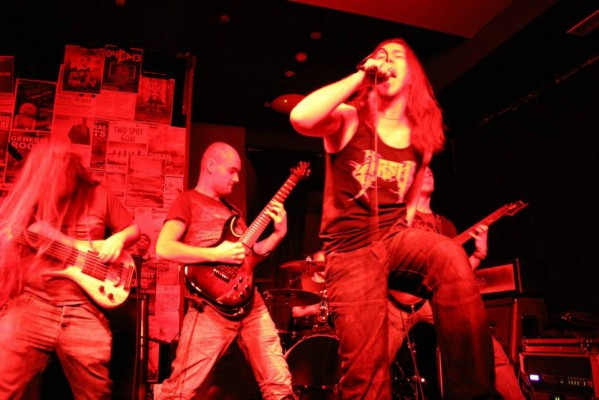 We don’t think of it as starting fresh – not entirely at least – more that this is the start of a new chapter for us. We have a phenomenal new guitarist in Alistair Bell (who’s been playing with us for a while now and is currently in the studio laying down some awesome riffage for our new EP) and a sound that has developed a long way since our first, painstaking, attempts at recording. It just felt that, if we were ever going to do it, now was the time. Time for a renewal and a rebirth and refocussing of our priorities.

We didn’t want to leave everything behind us of course. To abandon all that we’ve done and all that we’ve achieved. That would be foolish and a waste of the time and effort we’ve all put in over the past couple of years. But change was necessary. Hopefully we’re bringing with us the best of the old days – the fans, the songs (some of them at least), the tshirts… while divesting ourselves of a lot of the baggage and negativity that has dogged us for some time.

Would you like to know more? Then why not head on over to our Facebook page where we’ll be adding photos, tour dates, videos and more over the next few weeks.

In addition over the next several months we’re going to be remixing (and in places, re-recording) some of our older material in tribute to those early years. These songs will all be released as a series of Pay What You Want downloads, collected under the name “The Bloodguard Chronicles”. We might even film a few videos or throw in a few guest appearances too.

The first one, the thrashy, uber-intense melodeath assault of “Panopticon”, is available right now for download from our new bandcamp page at:

To top it off we’ve also got a new video (our first) for the song up on our YouTube page (and, from tomorrow, our Facebook page) over at:

[Editor’s Intrusion: the video is also embedded below] The video was filmed several years ago, by our good friends in Ask Me Tomorrow Productions, and features the last-known sighting of our old guitarist, Mr Alex Parvis. Where he is now nobody knows… 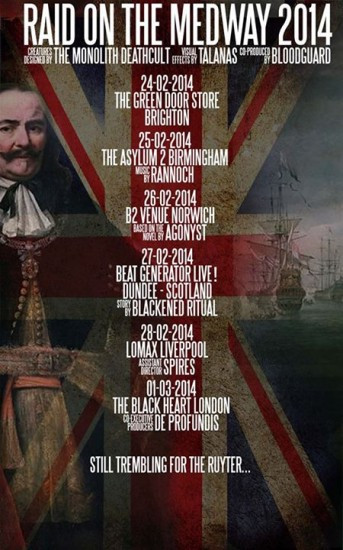 We’ll most likely be playing that song on tour with The Monolith Deathcult and Talanas at the end of the month, where we’ll be hitting:

I mentioned an EP earlier as well didn’t I? Well that’s going to be out for the tour, and is going to be entitled “Monstrous”.

It’s 3 tracks of monstrously heavy death metal stomp and grind, with a flair for razor-edged melody and a raw, savage undercurrent of nihilistic venom. The tracks featured will be:

We’ll be playing the whole thing in its entirety (just like Slayer!) on the tour in February. We’ll also  be unveiling the cover art soon, as well as some new promo pics to coincide with the release. And the whole thing will be available from us on tour and on order from our Bandcamp page from the 24th of February!

Let me say, in closing, thank you to everyone who’s supported us, to all the fans and friends who’ve stuck with us, waiting and waiting through one disaster after the next… to Tom, for all his hard work on the video, to Luke for his invaluable assistance engineering (and re-engineering), to Alex and Jonny for their years working with us putting the foundations of the band together, and to Islander for providing an invaluable platform for us to get more exposure.

Remember… there is no salvation… we are all beyond grace.