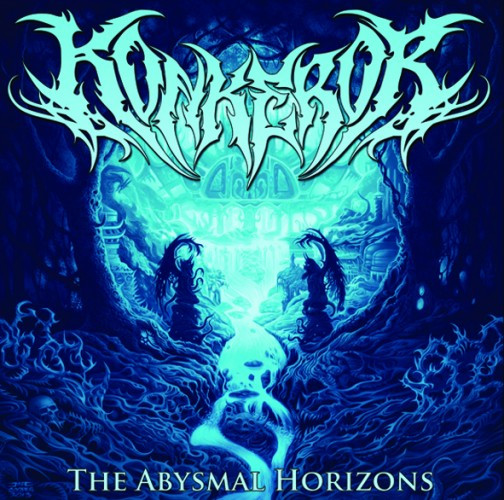 In October 2012, NCS writer TheMadisraeli went bonkers over the debut album by a band from the outskirts of Detroit named Konkeror. He threw around comparisons to the likes of Melechesh, Nile, Vader, Obituary, and Immolation and concluded by praising The Abysmal Horizons as “a collection of songs that prove potent enough to compete with even the most legendary of death metal veterans — it’s impressive, it’s vicious, it’s sophisticated, it’s badass.”

Now, Lacerated Enemy Records is on the verge of re-launching Konkeror’s debut worldwide with brand new eye-catching artwork by Mark Cooper (above), in physical as well digital formats, and including Konkeror’s recently recorded cover of Bolt Thrower’s “Cenotaph” as a bonus track. And to help add fuel to the launch we’re premiering the band’s official video for the album’s first track, “I, Monolithic”. To borrow TheMadIsraeli’s words about this song:

“A foreboding acoustic intro followed by a doom riff with badass solo work ushers in a torrent of blackened death metal ferocity.  The riffs here just catch your ear, attach to your memory like leeches, and mummify you from the inside out…. After this song alone, you’ll feel like someone just hit you with a truck.”

And with that introduction, enjoy the video for “I, Monolithic”. The Abysmal Horizons is due for release on May 15.  For more info about the re-launch, stay tuned to these pages:

5 Responses to “AN NCS VIDEO PREMIERE: KONKEROR – “I, MONOLITHIC””