(In this post Andy Synn reviews the forthcoming second album by the UK’s Ancient Ascendant.)

“Raise the crone to burn again!”

The song in question, “Crones to the Flames,” is a mammoth concoction of dense, tightly welded riffage and scorched-earth vocals, propelled by a series of unerring, martial drum beats and an undercurrent of writhing, prominent bass work.

Cold, calculating, and crushingly heavy, its razor-edged death metal hooks, seething tremolo melodies, and even lithe touches of acoustic harmony all add their poisonous flavour to this bubbling cauldron of pure molten metal.

A savage statement of intent, if ever there was one. 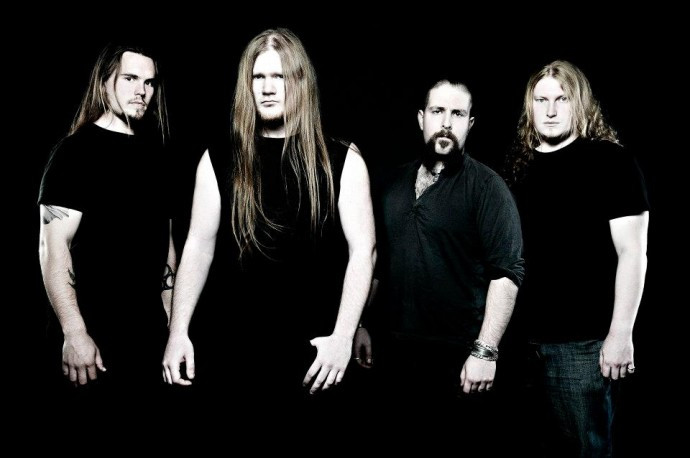 Echoes and Cinder continues the slow-burning evolution of the band, excavating the bare bones of their thrashy roots and welding them to a titanic engine of primal death metal force, before coating the whole thing in a choking layer of blackened intensity.

The melodic menace that introduces “Patterns of Bane” certainly demonstrates the band’s more intricate and progressive leanings, building up a weighty atmosphere of suspense before the inevitable eruption of metallic violence that follows.

The drums roil and thunder with elemental might, shifting from bruising stomp to blasting ferocity in the blink of an eye, while the guitars rake and strafe with withering power, unleashing a barrage of chugging riff-based artillery, intercut with moments of soaring melodic bombardment.

Yet it’s also undeniable that Ancient Ascendant’s sound remains uniquely their own despite these comparisons – heavier, denser, more deathly and dominant, with a wickedly incisive melodic and progressive streak that allows these songs (none of which, barring reflective instrumental piece “Embers”, comes in at less than 5 minutes) space to breathe and flex their inhuman muscles.

The supercharged aggression of “Riders” melds thrash-fuelled intensity with furious, flaying hooks and a venomous vein of malevolent melody, culminating in a frankly monstrous chorus refrain, while “Fuelling the Flare” interweaves soaring harmony, bleak misanthropy, and twisted complexity into something absolutely captivating.

The driving tremolo melodies and gnarled, crunching riffs of “To Break the Binds” whip the intensity of the song to a fever pitch, creating a magnetic vortex of blazing hooks and visceral, throat-rending vocals. In some ways the most simple and direct song on the album, the more open nature of its construction acts as a showcase for the clever interplay between  the guitars of Butler and Nariman Poushin, as well as the subtle embellishments offered by Webb’s slithering bass lines and the rhythmic creativity of drummer Dave Moulding’s performance behind the kit.

“The Toll of Mourning” meshes bone-grinding heaviness with a progressive, predatory intellect, shifting and stalking its way through nearly 8 minutes of scything riffs, mercurial bass lines, and eviscerating vocals. Moments of skyscraping melody and cavernous, chugging death metal misanthropy vie for the listener’s attention, as their serpentine rhythms shift and undulate beneath a series of scintillating solos, building steadily towards a truly impressive climax.

The album concludes with the ravenous animosity of “Caged in the Tunnels of Time”, its berserk riffage and disharmonic sense of melody combining to lethal perfection, melding the very best of the band’s sound into one absolute powerhouse of a song.

Butler’s vocals have never sounded better, both his immense death growl and rabid snarl erupting from the speakers in a ceaseless torrent of primal aggression, while Moulding positively batters his kit to within an inch of its life, holding the whole song together with the precise detonations of percussive force.

Ultimately though – as with all the songs on the album – it’s the sheer plethora and intensity of the riffs which is the deciding factor, each one a violent, vituperative explosion of malice and belligerence hammered together into devastating form by a combination of technical skill and sheer force of will.

I hope it’s clear by now that, despite what comparisons one might care to make, Ancient Ascendant truly stand alone.

Heavier, harder, and more than a few shades darker than many of those who might be considered their peers, the band possess a signature sound and style that they’ve built  with their own formidable hands, through years of blood and sweat and brimstone tears.

Echoes and Cinder is nothing less than a testament to those years of struggle and survival, and a shining moment in the band’s career.

Echoes and Cinder will be released March 24 by Candlelight Records and can be ordered via the Bandcamp link below. You can now stream the entire album below as well.