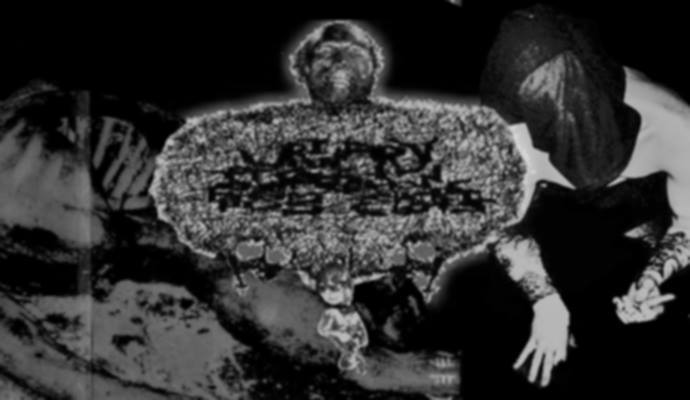 (Christian Molenaar plays guitar (and flute) in San Diego’s Those Darned Gnomes. He also performs, on those or other instruments, in Mortal Bicycle, Static Goat, City of Brass, Cëmetricity, and the Cooldad Memorial Volcanic Orchestra, among others. And as you’re about to see, he knows a thing or two about a host of subterranean sub-sub-sub-sub genres. And he can write. And he’s funny.)

There is a fifth dimension beyond that which is known to man. It is a dimension as vast as space and as timeless as infinity. It is the middle ground between light and shadow, between science and superstition, and it lies between the pit of man’s fears and the summit of his knowledge. This is the dimension of imagination. It is an area which we call… The Gorenoise Zone.

Halfway between the utter pretension of so many in the noise scene and the legitimately questionable tenets of goregrind (here’s looking at you, Cemetery Rapist) lies the paragon of human musical innovation, a hybrid creature so truly beautiful it can only be heard by those pure of heart. Welcome, friends, to the world of gorenoise.

After Islander wrote about Phyllomedusa’s most excellent Puddle Dependency I felt compelled to spread the gospel of gorenoise, its history and what may lie in its future. Take my hand, friend, and walk with me into a beautiful new world…

A Word on Goregrind

The first major component of gorenoise is the goregrind influence. Goregrind is often compared to and confused with grindcore, and they are indeed very similar, however with a few key differences. Musically, the guitars often play drop-tuned, more metallic riffs as opposed to the sped-up hardcore style you’ll hear in bands like Agathocles or early Napalm Death. Goregrind also often features pitch-shifted, faux-guttural vocals in contrast to the dry hardcore bark of grindcore. The other major difference is that lyrically, unlike grindcore’s often political message, goregrind is nearly always rooted in death and gore (hence the name), especially from a medical or pathological perspective. 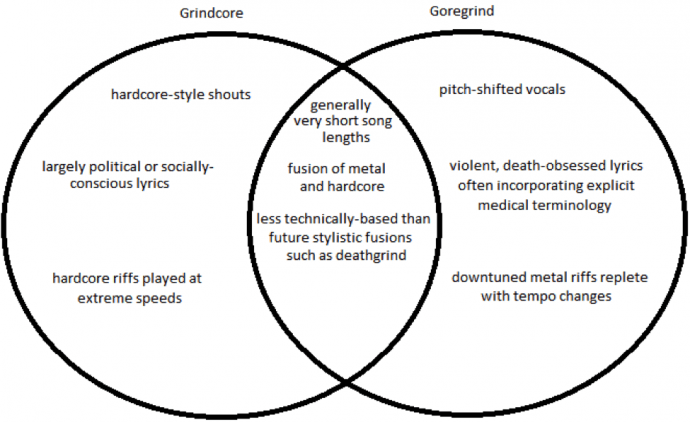 Last Days of Humanity are arguably the definitive goregrind band. Key features: pitch-shifted vocals, riffs made incomprehensible after being run through the worst guitar rig of all time (probably something like a Crate Excalibur or worse yet, a Blue Voodoo), a gross-out quasi-medical sample intro that’s longer than the song itself, and most importantly: THAT SNARE.

Carcass flirted with (and debatably, invented) goregrind with 1988’s Reek of Putrefaction. While they toyed with slower, more death metal-oriented sections like the brief intro to this song, the album largely holds to the standards of goregrind with medically-themed lyrics and titles and short bursts of maniacal energy.

Much like Carcass, Impetigo more heavily utilized dynamics and tempo changes than lesser bands. While Carcass may be bigger these days after switching up their style on just about every album they’ve released, Impetigo stayed with their original sound and I think were better off for it. They’re frequently mentioned along with Nuclear Death, and both bands are vastly underrated with incredibly dark, legitimately psychotic lyrics.

The Other Side of the Coin

Harsh noise constitutes the other half of gorenoise’s two main influences. I’m sure many readers will easily be able to identify the categorical constants of harsh noise: a lack of melody, rhythm, or songwriting in any traditional sense in favor of textural or timbral experiments. Less traditionally musical than noise rock and distinct from ambient or drone, harsh noise is, in terms of music and the “scene” itself, largely an unstructured wasteland rife with controversy and a commitment to complete annihilation of boundaries.

The ever-prolific Merzbow is pretty much synonymous with harsh noise for both aficionados and those only peripherally aware of the genre. Notice the disregard for structured rhythm in favor of a wilder churning feel and the abandonment of any kind of traditional instrument for heavily distorted, oscillating synthesizers to create a wall of evolving, unpredictable textures.

Another one of the bigger names in noise, Masonna has been in both Flying Testicle and Bustmonsters with Merzbow and other superstars of the japanoise scene. Note the other artists on this compilation: Incapacitants, Hentaitenno, Niku-Zidousha, Government Alpha, What A Smell, Hijo Kaidan, and The Gerogerigegege—all worth your time.

I’ve long held the belief that metalheads would love noise if they could find the right gateway bands. When executed well, it can match the upbeat intensity of hardcore, the crushing heaviness of any sludge band, and with the ice-cold atmosphere of black metal to boot (perhaps if this article works out I can write a treatise on noise next). Enbilulugugal are the absolute kings of the black noise/raw black metal sound and this song is a perfect example of why. Be sure to check out NCS’s interview with Izedis here and grab their latest album for name-your-price download here.

A Most Glorious Union

Now that we’ve covered the main ingredients, it’s with great pleasure we can move into the fetid waters of gorenoise itself. Combining the heavy riffs and blasting drums of goregrind with the commitment to abrasive exploration found in noise, gorenoise has developed into a fully-formed new beast set to conquer YouTube and the cassette decks of Eastern European basements.

Primary elements of gorenoise are the pitch-shifted vocals of goregrind and the coarse, scratching textures of noise. Production is hurled through a thick swamp of clamoring racket and drums are programmed into perpetual ringing blasts. Lyrically, it’s nigh-impossible to find anything as perverse as these songs.

Vomitoma are to me the definition of gorenoise. The pitch-shifted cricket-flatulence/toilet-flushing vocals over programmed drums and indecipherable guitar riffs drenched in solid-state fuzz are all hallmarks of this style. Vomitoma are to gorenoise what Cannibal Corpse are to death metal: they may not have founded the genre but you’d be hard-pressed to find a more archetypal example. See also Torso Fuck, Infant Bile, or Dead Infection.

Here you can see the inimitable Jon Engman tracking drums for Urth and absolutely shredding while he’s at it. Engman has played real drums in a wide variety of bands, from Brodequin to Liturgy, but perhaps most relevant to the affairs at hand is his harsh noise project Custodian.

Only two avenues of distribution seem to exist for this kind of music. A grimy underbelly exists on YouTube where one can find the seediest metalheads who flock to this scene most likely because it’s as close as they can get to finding real scat fetish videos on YouTube. Previously there were hundreds of unknown one-man projects available on MySpace but it seems they’ve all disappeared, most likely so they can’t be used as evidence in any assault cases.

The only other format this music seems to take is extremely limited cassette runs ranging from as many as fifty to as few as five, which is about how many fans of this kind of music exist in the world.

Though Tampax Vortex can more accurately be described as pornogrind (see below), they exemplify this aspect of the scene. This tape was produced in a limited quantity of twenty-five and is exactly the kind of thing I might buy to look at the artwork, once, and then throw in a shoebox under my bed along with all sorts of other things that embarrass me. Note how perfectly they’ve managed to ape the electro-slam sound of Libido Airbag or Gut (again, see below).

An anomaly in the gorenoise world, Urine Festival are comprised of ex-members of the aforementioned Last Days of Humanity and have actually produced pro-pressed CDs, perhaps making them the most successful band in the genre (not to mention the fact that they’re one of its only actual bands).

Cybergrind can fairly accurately be described as “grindcore with a drum machine” and in this aspect alone it is similar to gorenoise. Cybergrind is largely hardcore-based or sounds similar to goregrind, but usually doesn’t feature the pitched-down vocals. Key features include programmed drums, barked vocals or high-pitched screams and a lo-fi guitar tone.

By far the best-known cybergrind project, Agoraphobic Nosebleed are clearly heavily influenced by hardcore and early grindcore in spite of Scott Hull’s more death metal-oriented riffs. I know for a fact Jay Randall is a big Agathocles fan and has issued all kinds of albums relevant to this post on his label Grindcore Karaoke—also be sure to check out his noise project Ultracide.

Often mislabeled as cybergrind, Genghis Tron really have more in common with mathcore and feature trace electronic elements. The grind elements are few and far between, and their style is far too progressive to be anywhere near cybergrind. Remember, kids, if you want to get anywhere in life you need to be able to differentiate between sub-sub-genres of music most people have never heard of!

Probably the biggest pornogrind band around besides Gut or Cock and Ball Torture, this duo exemplifies the music in a way no definition ever could. Note the prominent electro influence while still maintaining the blasting edge of goregrind.

One of the bigger-profile names in pornogrind (and with a remarkable 4,235 Facebook likes), Spermswamp is the project of one Mr. Morbid Pimp. As with much of the music in this sub-sub-sub-sub-genre, he seems to genuinely believe in the views espoused in his lyrics. This song in particular was a favorite of mine during my freshman year of high school.

This incredibly small niche genre is largely unlistenable to the vast majority of people with functioning brains. The only real fans of the music seem to be Midwest metalheads who trade the tapes among themselves for meth money (if you’d like to get in on that action, head over to Discogs). A few years ago some small groups of hipsters or scene kids on MySpace would on occasion try to step in and listen ironically, but it seems they’ve either grown out of that phase or become too PC to associate with it. With MySpace deleting many unused, unclaimed accounts, the only record of these obscure projects will soon be on YouTube. I can only hope that with this guide I’ve helped even just one individual to see the light and preserve the legacy of these upstanding individuals.

What do you think of gorenoise? Who are your favorite one-man Estonian pornogrind projects? Can you even tell the difference between these pointless, largely arbitrary categories? Does anyone care if gorenoise survives? Let me know what you think in the comments if you wish for me to leave you a long-winded reply containing far more information that you could ever care to read.