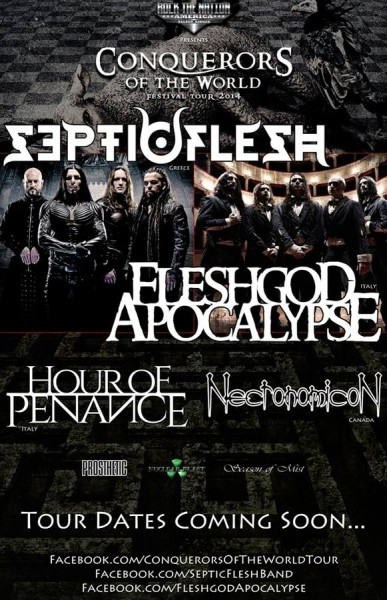 I was away from the internet for 8 hours yesterday. On the one hand, it was kind of refreshing. On the other hand… I sure as shit missed a lot of metal news. The first item I saw upon returning to the wired world was a post by Andy Synn in our NCS group on Facebook, spreading the word about the Conquerors of the World Tour, with a comment: “Stick Dimmu in as headliners and you’d have ALL the symphonic bluster you could muster.” No shit.

Here’s the announcement that appeared on the Septicflesh Facebook page:

“”We are thrilled to announce that we will be returning to North America/Canada with our blood brothers in Fleshgod Apocalypse, Hour of Penance and Necronomicon,” comments SEPTICFLESH. “This promises to be a night in darkness to be remembered as we prepare to unleash our colossal new album ‘Titan.'”

No dates yet, but this promises to be one of the year’s can’t-miss outings. As soon as we get the schedule, we’ll slap it up on the site without delay.