The Indiana anti-cosmic deathcult Ptahil have recorded their third album, Born Against, and it features the striking cover art you see above by P. Emerson Williams. It will be released on my birthday, July 8, which certainly can’t be a coincidence. Okay, maybe it’s a coincidence, but it’s a very happy one.

So far, the band have released one song from the new album for streaming, and it’s the title track. That stream has been out for a while, but it’s on my mind because I’ve been spinning a copy of the CD, which is itself imprinted with the second half of P. Emerson Williams’ full work. The song “Born Against” is Ptahil firing on all cylinders, mixing distorted storm winds of blasting bestial fury with infernally majestic processionals of crushing riffs and booming drumbeats. The atmosphere is both harrowingly destructive and triumphant. As usual, the vocals are also convincingly demonic.

Born Against can be pre-ordered from Arctic Music Group here. I’ll have more to say about the whole album later. 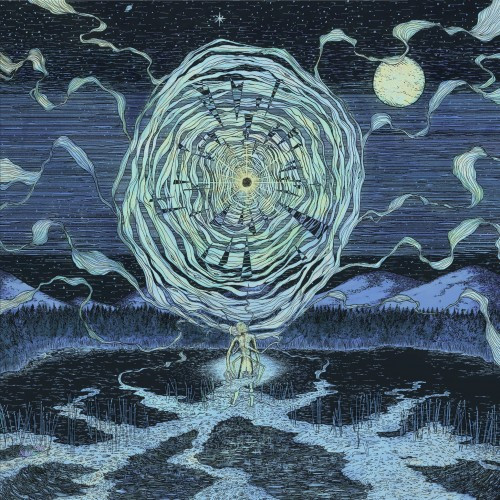 Speaking of striking cover art, the piece you see above by Kristian Valbo is what first drew me to this Norwegian band (who share the same name as a U.S. band with which some of you may be familiar). It appears on this band’s third album, Morbid Dimensions, which will be released on August 15 by Hells Headbangers in the U.S. and Duplicate Records in Europe.

Two tracks from the album have premiered so far, the title song and “Ancient Tongue” (which is available as a single download). The music moves between a racing charge of whipping, dissonant riffs with somersaulting percussion and slower, more atmospheric passages shrouded in darkness. Both songs are excellent intersections of black and death metal, with standout instrumental performances (especially the inventive lead guitar work) and a hair-raising , multifaceted vocal assault.  Check them out below.