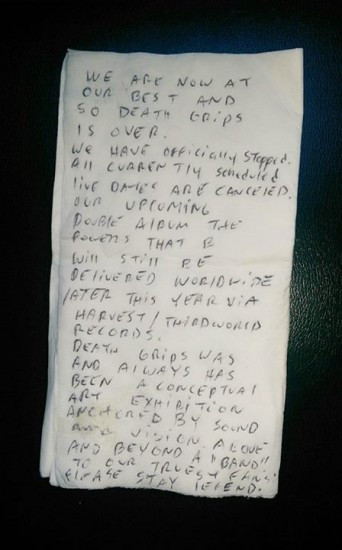 We were early supporters of Death Grips, and have written about them repeatedly since the beginning. They were “metal”, even though they weren’t metal. They’ve always gone their own way, not only in their unusual approach to making music but also in refusing to conform to expected behavior in the music industry (remember when they gave a big FUCK YOU to the Epic/Columbia label by releasing No Love Deep Web for free download in advance of the label’s official release?). And now they’ve done it again — disbanding at the height of their popularity, with an announcement late yesterday that was just as unexpected as the timing of their album releases.

Above is a photo of a farewell note that they posted on their FB page. It promises one last double-album later this year. Many bands have announced their break-ups only to resurrect themselves later. I don’t think this band will do that. Here’s the text of the hand-scrawled note:

“we are now at our best and so Death Grips is over. we have officially stopped. all currently scheduled live dates are canceled. our upcoming double album “the powers that b” will still be delivered worldwide later this year via Harvest/Third Worlds Records. Death Grips was and always has been a conceptual art exhibition anchored by sound and vision. above and beyond a “band”. to our truest fans, please stay legend.”

We go back to a song we featured when BadWolf first introduced Death Grips to our site in 2012:

I need something to cheer me up. This will do. It’s been spreading around the metal part of the web like a virus since yesterday, so maybe you’ve seen it. I wish it were longer:

5 Responses to “R.I.P. DEATH GRIPS (AND SOMETHING TO CHEER US UP TOO)”