(DGR wrote this review of the new album by Origin.)

Origin are a band who have some miles on them. In my case, they landed on my radar ‘long about the time Headbangers Ball gave their video a spin back in 2008 — I think? — and since then I’ve attempted to keep my eyes on them. However, the group stick to a pretty solid new-album-every-three-years schedule, so it wasn’t until 2011 that I got to really swoop into the whole zeitgeist of fandom with them after the release of Entity. With Entity, Origin really planted both feet on the ground as one of the bands who were going to take the concept of tech-death and push it to its very limits. Instrumentally, the whole album was a frightening affair — filled with a combination of technical pyrotechnics and insane speed capable of leaving listeners slack-jawed. That the album was essentially a three-man affair made the whole thing even more insane.

The issue with that album, though, is that for all its incredible playing and stunning technicality — believe me, it was insanely challenging from the first note of the over-the-top “Expulsion Of Fury” — it became something of a morass. You couldn’t really tell which song was which after a while, as one wall of notes after another came crashing down around you. Part of that could be written off, because it feels like the very purpose that drives Origin’s existence: to be the “most”. If they were going to go a full blown tech-death route in 2011, then Entity was going to be the “most” tech-death you could pack into one disc, and the result was a dense obsidian slab of it.

That’s why, with Entity as background, I became so interested three years later about Origin’s new disc Omnipresent. Where would the band going after something like Entity? Could they line up with earlier releases? Could they match Antithesis and its endless replay back in the Headbangers Ball 2.0 days on MTV2? All of these questions were valid, plus you now have the presence of a dedicated vocalist within the band. Surprisingly enough, on Omnipresent, Origin reign it in a bit . The stunning guitar playing, progressive writing, and insanely technical aspect of the band are all still present, but now you can actually distinguish just what the hell is going on, and in that sense Origin have created some of their most enjoyable music to date. 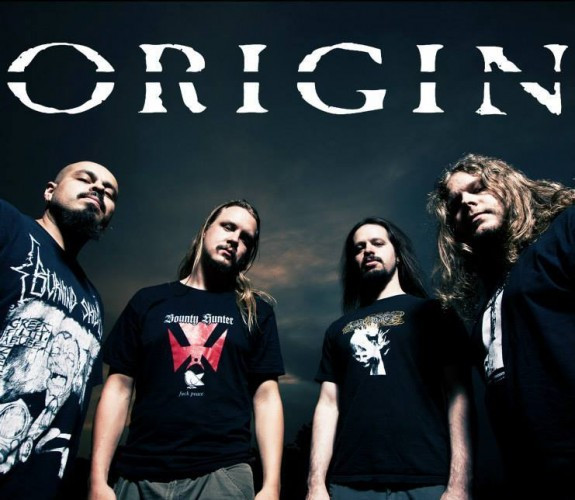 Omnipresent remains a really technical disc, just not as much in comparison to works such as Entity. Omnipresent is filled with groove and a more progressive style of songwriting than before, save for one song that feels like a d-beat crust punk tune put through the Origin filter — which may wind up being my personal favorite on this release. Origin have also embraced a three-pronged vocal attack, and it gets a ton of play throughout the disc, usually to add different ranges of screams at the more powerful parts of a song. They aren’t really canonizing during any sections; instead, they play with the common call-and-response formulas, as well as layering the voices on top of each other. And so you have vocalist Jason Keyser’s low-end, fire-belched growls buttressed by a high shriek as well as a mid-range that often sounds like Jason being doubled over.

Omnipresent is constructed in a way that feels like it was organized in Acts at one point, because every three or so songs there’s a quick interlude before leading into the next song, usually as a breather from the previous track. It gives the album a flow of sorts rather than the previous all-hands assault that Origin dished out — but that doesn’t mean it’s any less octane-fueled than before. The album opens with the relatively straightforward “All Things Dead” — which quickly seems to transform into “Wall Things Dead” as they repeat the phrase over and over again. It’s definitely the first sign that Origin might be pulling back a little from the brink of extremity, but then they quickly hammer that notion into the ground and leave it in the dirt with “Thrall:Fulcrum:Apex”.

“Thrall:Fulcrum:Apex” is that blade’s-edge, hyper-speed kind of track that Origin have made their stock and trade. Even when they get into a slow grinder of a slam section, they just as quickly destroy it with a super-high shriek and jump right back into the hyper-speed blast-and-guitar pyrotechnics. It also helps that the song is only a minute and seven seconds long; you really don’t feel like you get a chance to breathe throughout the whole experience of that track. As one of the weirder experiments that Origin have packed into Omnipresent, it’s also one of the best songs on the disc.

That said, most of the songs on the album are written in a vein similar to “All Things Dead” and “Manifest Desolate” — songs filled with martial, grinding drum beats — especially the closing double-bass drumming on “Manifest Desolate”, which deserves a shoutout for being subtly difficult. Each has its own little flair, but they’re all about as red meat as you can get with death metal. It feels like Omnipresent fights itself for half the disc to become a death-grind album or a technical death metal disc, and the fact that the contest polarizes the album means that you get a ton of varied songwriting between the two moods. The love that I have for “Thrall:Fulcrum:Apex” carries over into “The Absurdity Of What I Am”, which manages to double the run time of “Thrall:Fulcrum:Apex” into a whopping two minutes and thirty seven seconds. 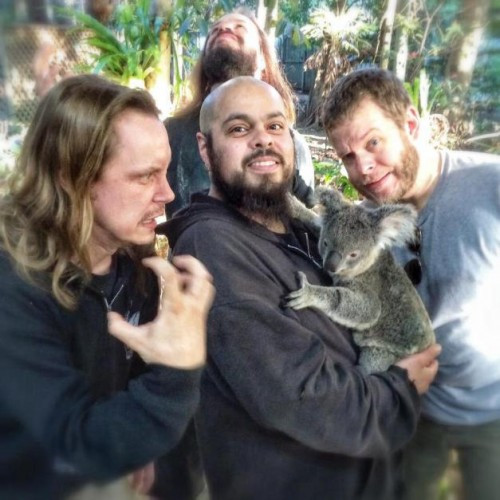 But, and I give this song its own paragraph for a reason, the song that really latched its hooks into me is “Redistribution Of Filth”. It may be the most surprising and un-Origin sounding thing on Omnipresent, but it is also the song that is the most fun due to its punk nature. I don’t necessarily recommend “Redistribution Of Filth” as the first experience of Omnipresent for any Origin fan, because it’s so different from everything else on the album that it might actually offend the people out there who are more prone to butthurt. It’s the one I referred to in the opening paragraphs of this review as being the d-beat crust-punk-styled song run through the Origin filter, almost like Origin crossing Misery Index, because that galloping drumming and bass-snare drum rotation is recognizable from just about anywhere. The way the song moves up until the more death metal blast section in the middle suggests it was written to get people circle-pitting. The call-and-response vocal style comes into full effect here as well.

“Redistribution Of Filth” is easily my most repeated song on the album, because for all its simplicity and sort of anti-Origin style of songwriting, it shows that the guys can kick out a really good song in seemingly any style. It’s such an odd addition to this collection of space-themed interludes, high-intensity death metal, and impressive technicality that I suspect it may be winning the battle in my mind for favorite song simply because it’s the underdog out of all the tracks. I never thought Origin would do stupid fun, but “Redistribution of Filth” is stupid fun and it works insanely well.

Because its not quite so 110% all the fucking time like Entity was, Omnipresent is a more approachable album from the outset. It also feels shorter, which lends itself to my favorite thing — constant repeats without noticing. It’s fun getting wrapped up in an album like this so much that you don’t notice you’re on repeat five in the span of a work shift. Moments of frightening technicality are still interspersed throughout the disc, but this time they sound as if they were written to mean something. More often than not, they’ll be subtly tucked into one of the more groove-oriented songs, or just put on the stage front-and-center during a shorter track. I’m pretty sure at some point a guitar and bass guitar both died at the hands of Paul Ryan and Mike Flores, as they just keep going higher and higher during the buzzing section of “The Indiscriminate”, which closes the album. As soon as John Longstreth starts pounding away at the drums you can feel your skin begin to crawl as they pick higher and higher to nails-on-a-chalkboard levels of screeching. It’s a truly intense moment that closes out the album.

Omnipresent is a varied disc that bounces between so many different moods, but it also contains some of the weirdest and best stuff that Origin have kicked out by far, with at least half of this album being immediately translatable into a live set just to get a crowd to destroy itself. It’s not as much of a wall of notes and endless blasts as the group’s last release, and it feels more concise and focused because of that; there’s some serious songwriting craft on display here. Omnipresent still manages to continue Origin’s pattern of constructing their albums to sound like sci-fi death-metal invaders from space, it’s just this time you don’t immediately get your face sheared off by track one.

They wait until track two.

Omnipresent is out today in North America via Nuclear Blast and was released on July 4 in Europe by Agonia Records. A full album stream plus video can be enjoyed below.