Both criticised and praised (often in the same breath) for their focussed commitment to blackened sonic savagery over the years, it’s probably not unfair to say that Belphegor have had their sound established for a while, and that a number of their albums were – if not interchangeable – at least very closely related to one another.

And please don’t read that more harshly than it’s intended. I love Belphegor, and for many years their sound was one that didn’t need to change, aside from the occasional tweak here and there. It was pure extremity and blackened blasphemous brutality, no frills, no fat, no filler – just album after album of lean, mean, killing machine music.

But change is inevitable it seems, and three and a half years after the release of the ravenous Blood Magick Necromance, the Austrian sadists have returned with their new album Conjuring The Dead, which on the one hand demonstrates a noticeable shift in approach, and yet on the other still feels altogether too familiar… 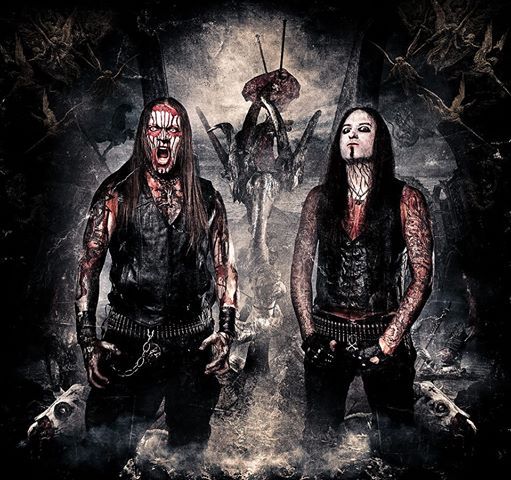 Right from the start it’s an album that sounds distinctly more Death Metal in tone and delivery. Erik Rutan’s production fingerprints give the album an overall feel that’s much more Deicide than Dissection, with a distinctly Floridian chug to the guitar tone and an almost painfully prominent drum sound front and centre throughout, along with a great deal of emphasis on Helmuth’s utterly inhuman vocals.

Oddly enough though, despite the obvious power of Rutan’s production and the raw savagery of the material, Conjuring The Dead comes across ever so slightly flat on first listen. Somehow the band’s attempts to change their sound in favour of a more consciously Death Metal approach have actually resulted in emphasising a feeling of familiarity within the material, robbing it of some of its magic(k) in the process.

This paradoxical problem is really epitomised by the songs “Gasmask Terror” and “Legions of Destruction”.

The former is pretty much your basic Belphegor song, albeit with a more Death Metal tinge, that only really comes to life with an injection of malevolent melody right at the end. It’s solid, but unremarkable, and even that welcome lick of evil melody at the end has a familiar feel to it. Whereas the latter track (killer though it is) feels less like a Belphegor song, and much more like the band channelling both Mayhem and Deicide at the cost of their own identity — both particularly apt comparisons, seeing as how the frontmen of both bands make a guest appearance on the track!

And there’s the rub. Sometimes the album sounds far too much like Belphegor going through the motions of their own sound, whileat others it sounds like the band trying to sound like someone else. Caught between a rock and a hard place, with an established sound that’s become overly familiar, and a new sound that seems to lack any real defining features, it’s almost a no-win situation.

That “almost” is telling though, as it’s not an album completely without merit. In fact at times it’s a downright visceral experience. It’s just annoyingly uneven.

The title track, for example, is a juddering, neck-snapping monstrosity of a song, complete with a traumatically atmospheric mid-section, that showcases the band injecting a heavy dose of mood and creeping horror into their music to great effect. And yet it’s followed by the generic Death Metal chuggery of “In Death”, which possesses no real life or identity of its own.

Both “Rex Tremendae Majestatis” and “Black Winged Torment” err a little more towards the traditional Belphegor sound, but while the former is a relatively dull affair throughout, the latter is a much more impressive example of the band at their blasting, belligerent best.

The second half of the album is consistently stronger, although seemingly over much too quickly, with “The Eyes” (an eerie, if not particularly vital, instrumental interlude) leading into the aforementioned “Legions of Destruction”, which is a great song in itself, despite the obvious prominence of its influences.

This is followed by “Flesh, Bones, and Blood”, perhaps the best example of Belphegor’s newly minted, more Death-Metal-focussed sound, which takes the aesthetic established on Blood Magick Necromance and pushes it even further in the direction of decaying dissonance and writhing, tormented horror.

“Lucifer, Take Her!” is a nasty little shock of scything blackened aggression and crawling darkness, which leads seamlessly into “Pactum in Aeternum”, the album’s outro/final track. On its own the song would probably be quite forgettable, not quite one thing or the other, but paired up with its predecessor (why the two were split up, I really don’t understand) it makes for a very strong, incredibly unsettling end to the album.

“The more things change, the more they stay the same…” is a horrendously overused cliché, I admit. And yet it seems somewhat apt here as Conjuring The Dead ultimately still feels very familiar, despite a clear attempt to grow and shift the band’s sound in a new direction.

And there’s the crux of the problem, and the central irony here. This attempt to define a “new” take on a familiar sound doesn’t seem like it really has much of a distinct identity or goal outside of trying not to sound like what the band have done before, and as a result often comes across as a little generic in both sound and execution. Whereas, ironically, it’s often those bits of the familiar Belphegor sound that give you the buzz you’ve been looking for. It’s a conundrum and a paradox.

Overall the band have made a good (occasionally very good), and suitably solid Death Metal album here, albeit one that somehow seems to lack that touch of (blood) magic necessary to make it really stand out.

Conjuring the Dead will be released by Nuclear Blast on August 5 in North America,August 8 in the EU, and August 11 in the UK. It can be pre-ordered here.

One Response to “BELPHEGOR: “CONJURING THE DEAD””