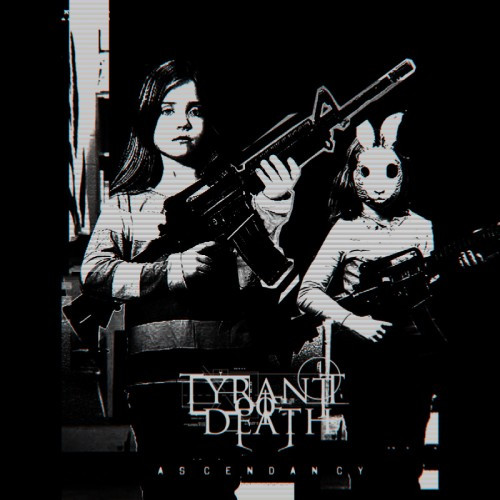 (DGR wrote this review of the new album by Toronto’s Tyrant of Death.)

One glance at the track lengths of Tyrant Of Death’s new release Ascendancy should tell you everything you need to know about this album. With each song exceeding a ten-minute run time, Ascendancy is an intimidating as hell disc. Tyrant Of Death has released a few longer tracks in its time on this earth, but has never before collected a bunch of them in one location. At first glance without listening, it looks like Tyrant Of Death gone prog.

Ascendancy is the fifteenth (!) Tyrant Of Death release, with a time gap of about a year since last year’s Nuclear Nanosecond, an album that itself emerged after a longer gap of time compared to Tyrant Of Death’s more prolific days when three or four albums a year would hit. It’s not Senmuth numbers, but this project has a lot of material out there, which has meant that with every release the band has had to work insanely hard to differentiate itself from the pack, not only from other musicians but also from its own huge slab of work.

Ascendancy is the grandest attempt at that yet, with its longer track run-times and a bevy of guest musicians from throughout the circle of bands with whom project owner Alex Rise has long associated — meaning that four of the five songs on Ascendancy have vocal tracks as well as a guest guitarist or two. Ascendancy is an ambitious disc — one that moves from the industrialized chaos of Anaal Nathrakh to the oblivion of blasts and science fiction influences that have long worked their way into the Tyrant Of Death formula. And almost all of it moves at a breakneck pace, with almost no room to breathe until the album’s closer, “Biomechanical”.

Tyrant Of Death releases are usually instrumental works, although this project has put out a couple of releases with full blown vocal tracks on top of them, and they have included some of my favorite material (see: “Macrocosmic Lunacy”) since the band really came into its own on Dark Space. The group of musicians selected to join Alex as he descends into machine-fueled madness should be immediately familiar, as some include returning vocalists and others, compatriots from the band for which he plays drums —Psychotic Pulse.

A quick aside: If you haven’t heard Psychotic Pulse, you should absolutely listen to them — I’ve reviewed both their full-length and their EP and found them immensely enjoyable.

Ascendancy begins its titular track with vocalist Omar Aijia (who also performs under the name Lucem Fero), who has been the go-to guy for much of Tyrant Of Death’s vocalized material. He gives the project a feral vocal styling that has often caused the group to draw comparisons to Anaal Nathrakh. His opening scream is distorted, drawn-out, and violent — sounding like it was filtered through an aluminum tube for maximum intensity and then run through an oscilloscope just to really ratchet things up. His lyrical stylings and usage of “Ov” instead of “Of” have often given Tyrant Of Death a black metal bent and that doesn’t change at all for the two songs he appears on, “Ascendancy” and “Lucifer’s Den”.

Every song on this disc goes through many a mood change, but “Ascendancy” and “Lucifer’s Den” move from ear-shatteringly fast to light speed for much of their duration (except for a guest solo on “Lucifer’s Den”, provided by Dean Paul Arnold), on top of some jarring and angular guitar string work that seems inserted solely to unnerve.

Sustaining a listener’s attention for ten minutes is a difficult act, and Tyrant Of Death does it by having each song feel like its own mini-album, as each one includes a variety of jarring changes. “Ascendancy”, for instance, opens with a soft piano track before really kicking into high gear, which isn’t something Tyrant Of Death has done before; this project has rarely been “quiet”. The previous Lucem Fero appearances on disc, for example, have all been high-octane and super-aggressive. The songs have multiple endings for certain movements, and although the vocalist doesn’t change, the songs will sharply change direction from being blast beat and death metal heavy to the howling wind that we often characterize as black metal, to the industrial and electrified insanity that will oft be inserted on top of the album’s more groove-heavy moments.

Ascendancy’s longer song lengths allow for some intense experimentation with the dynamics of the album and how it flows. In this case, the songs never seem to actually reach a hard stop, or any sort of delay to signal that the tracks have switched — they crash into each other like ships being cast against the rocks in a roiling tide. “Ethereal” — which is song two — bounces right into frame after the end of “Ascendency” and features Alex’s Psychotic Pulse bandmate Wes MacDonald at the helm of the song.

It feels like the more groove-heavy cousin to the opening track’s constant flurry of lightning bolts cast from the heavens. Wes‘ vocal styles range from a mid-range shout to the high shriek of someone just teetering on the edge of losing their voice. He’s probably the most prominent of all the vocalists in the song, as he’s constantly in lock step with every bounce, swerve, and switch that the song throws at him, nary taking a moment to breathe outside of an odd movie sample that seems to come out of nowhere before it is obliterated by a massive drop of guitars, like a second story Guitar Center suffering a floor collapse.

“Bio-Cell”, on the other hand, which is in the running for my favorite song on this disc, is a slow grinder for much of its opening, but that whole opening segment is super-intense and percussive — and the song stays that way for the better half of its run time. Malcolm Burgess contributes vocals here, and he’s a little bit more reserved than his compatriots on the album — really only going for the high yells during brief chorus passages that are buttressed by a severe and distressing section of blast beats and death metal gallop riffs.

“Bio-Cell” really breathes and is an absolute monster of a song, though; if you have to check out just one from Ascendancy, then I’m leaning heavily in the path of just recommending this. It’s the most groove/industrial-death-metal of the songs on the disc, and a super-intense experience in its own right. The weird, slightly out-of-tune piano section that appears in the middle of the song is also great.

Ascendancy is a brave experiment for a project like Tyrant Of Death. It truly is the most different of all the albums to date. Keeping a listener interested for multiple ten-minute songs is a highwire act with no safety cable — and doing so for five, including one more traditional instrumental at the end, is a ballsy maneuver. The rotating-vocalists approach works well for this style of music, and because of that, everything on Ascendancy just clicks into place. It’s one of those rare experiments where everything seems to work as intended — which means that what we have here is another super-loud, abrasive, and highly recommended Tyrant Of Death release. With an increased death metal focus and the theatricality of the music present on the album, missing out on this one would be an absolute shame.

2 Responses to “TYRANT OF DEATH: “ASCENDANCY””