The new album, MEÐ VÆTTUM, will be released by Napalm Records later this year. The cover art was created by Ásgeir Jón Ásgeirsson, whose website is here and who also made the cover art for the band’s last album, Börn Loka. I don’t have any of the new music to share with you at this point, but I’m sure we’ll be featuring it as soon as the songs begin to appear. Here’s the staggered release schedule for the album:

I’ve written about ZOM once before. They’re based in Dublin, Ireland. According to Metal-Archives, they released a five-song demo in 2011 and then a two-song EP in 2013 named Multiversal Holocaust. In July both the demo and an expanded version of the EP (adding one additional song) appeared on Bandcamp, and I reviewed the EP here. An excerpt:

ZOM deliver a thermonuclear assault of hellish blackened death metal with grotesquely distorted guitar maelstroms and reverberating leviathan roars. But the music breaks in just the right places to shake you down with both doom-saturated crawls and physically convulsive thrash riffs…. Listening to this music is like main-lining adrenaline, setting yourself on fire, and then leaping in front of a rushing freight train.

So, having fallen in lust with that ZOM EP, I was stoked to see the artwork above, which was rendered by one of my favorite metal artists —  Zbyszek Bielak. It’s the cover for ZOM’s debut album, Flesh Assimilation, which has now been scheduled for a late November 2014 release by Ireland’s Invictus Productions in Europe and Dark Descent in the U.S. We’re told that a track from the album will be premiered online soon. Bring it! 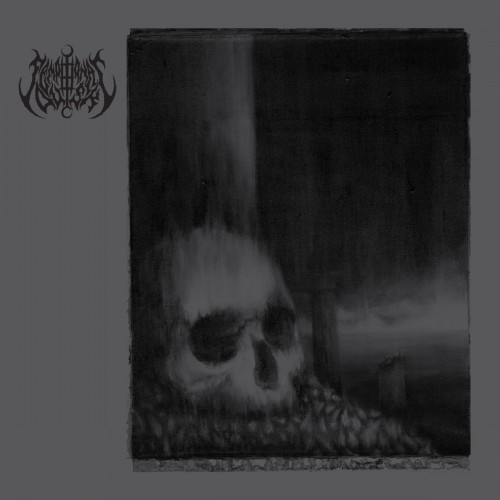 Finally we come to the debut self-titled album by Portland, Oregon’s Sempiternal Dusk. Although the band is a relatively new creation, it includes drummer/vocalist Tim Call of The Howling Wind, Aldebaran, and Nightfell (among others) and bassist T. Gann from Shroud of the Heretic, along with co-founder J. Huss (ex-Warwolves) on guitar (with A. Wheeler of Weregoat and Ritual Necromancy on second guitar when the album was recorded. Those names would have been enough to entice me, but that creepy album cover sealed the deal.

Yesterday Last Rites premiered a track from the new album named “Upon the Gallows at Perihelion”, and it’s just goddamned monstrous. The premiere was accompanied by a well-crafted review by Dan Obstkrieg, who wrote that the band’s “stretched-out doom/death is truthfully a crepuscular horror”:

Sempiternal Dusk’s default setting throughout the album is “menacing clatter.” The songs are light on their feet when they need to be, but the monomaniacal focus throughout is on feeling over flash. Riffs stretch long, tremolo-ing across measures; the drums kick a steady but agitated heartbeat; and Call’s deep, sometimes sneering vocals are dredged across eons. (At times, there are flashes of the great Morgion.) And yet, there’s room for surprise, too: around the 3:00-minute mark of “Upon the Gallows at Perihelion,” the song hits a break, and then all of a sudden swings.

Check out the rest of the review here. The song is on Bandcamp, where the album is available for pre-order (it releases on Sept 30):