On October 31, 2014, W.T.C. Productions will release Liber Lvcifer I: Khem Sedjet, the second album by Greek black metal band Thy Darkened Shade. In due course, you will hear much more about this album at our humble site. For now, it is enough to say that it’s absolutely stunning — one of the year’s best.

Today we have two teasers for you: In this post we bring you the premiere of the album’s eighth track (of 11) — “Saatet-ta Renaissance” — and then a bit later today we will bring you a fascinating interview with the band’s main man Semjaza, an interview that will significantly affect the way you hear the music. But the music comes first.

“Saatet-ta Renaissance” is one of this massive album’s longest songs. As it moves from entrancing acoustic strumming and choral chanting into an abrupt explosion of blistering fretwork and blasting percussion, you may experience a feeling of disorientation — and that feeling may be enhanced by the warm bounding bass notes and the rocking back-beats that come next, or by the variance between primal clawing growls and clean-voiced proclamations that give life to the lyrics. 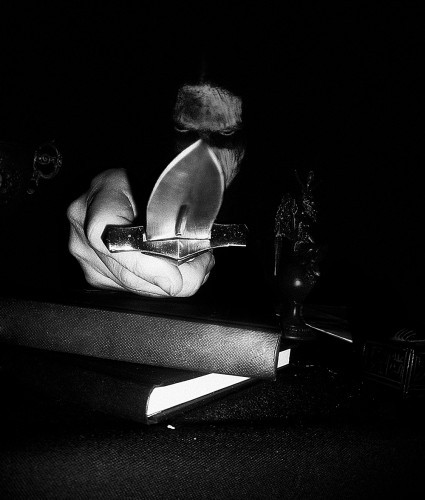 Throughout, the music burns with black fire, fueled by a rush of inventive instrumental extravagance and the kind of creative exuberance that signifies freedom from constraint and delight in the journey. This is indeed satanic black metal that brandishes gleaming claws, but at least for this listener it is equally bright with a sense of pride and joy — and the performance of the music is tremendously skillful.

Liber Lucifer I was written and performed by Semjaza, with session drums performed by H.G. and chants and rites provided by THE A, and a guest appearance by Magus Wampyr Daoloth of Necromantia on the song “Daemon Phosphorus”. The cover art was created by Vamperess Imperium.

The album was produced by Semjaza, V. Santura, and Stamos Kolliousis, and it was mixed and mastered by V. Santura at Woodshed Studio. It will be released on CD, vinyl, and digitally on October 31.

2 Responses to “AN NCS PREMIERE: THY DARKENED SHADE — “SAATET-TA RENAISSANCE””