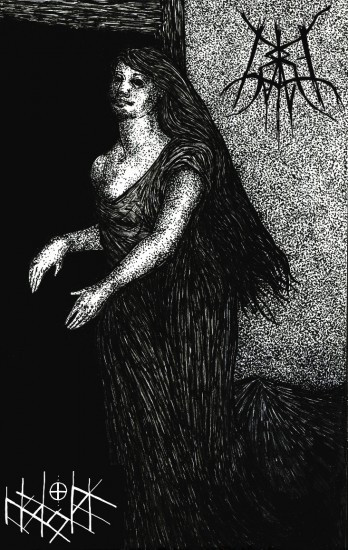 It’s inexorable doom, an abyss of hopelessness, a miasma of death. The only sign of humanity that rears its head are barely human shrieks and distraught yells that emanate from what must be a very deep pit of emotional despair. 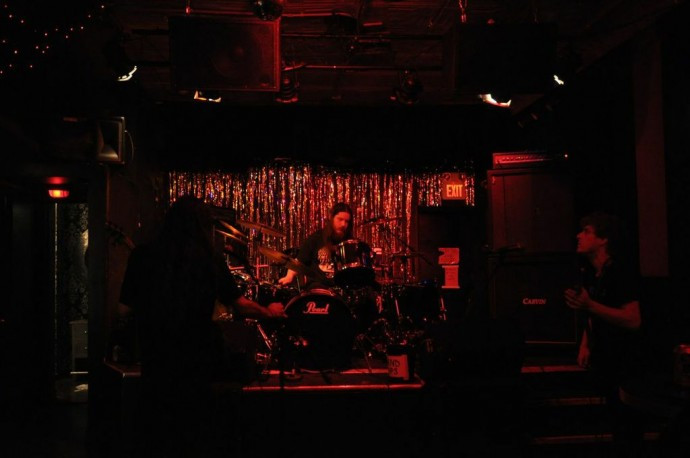 “Torture doom” is a good genre label for “Scour”, if you need a label. Music this ugly and this barbarously bleak will undoubtedly cause some listeners to cringe in disgust or cower in fear, but for others it will resonate deeply. There’s really only one way to find out.

I’ve listened to the song half a dozen times. Each time I detected some new crevasse I hadn’t fallen into before. Each time I had to shake myself out of a horrible revery and relocate myself in the physical world when the song ended. You listen, and you don’t go to a good place; if there are dark spaces in your head, that’s where you’ll be visiting.

Venowl’s members conceal their identities, for reasons they explain in the interview that precedes the stream of “Scour” below — though it is known that one of them is Ascaris from the band Ævangelist and an Ævangelist touring member known as ][. They identify themselves using typographical symbols:

All of them participated in the e-mail interview to follow. It will give you some valuable insights into what you’re about to hear. I suspect that trying to read it while you listen to “Scour” would be difficult, but if that’s your preference, the song stream is at the very bottom of this post.

The Venowl/Cara Neir split will be released by Broken Limbs on a limited edition of 100 copies on gray shell cassettes, featuring cover art by Derek Setzer. Presumably, it will become available on Bandcamp in due course. One of the Cara Neir songs is streaming at Pitchfork (here). Relevant links are below:

Venowl released splits this year with Jute Gyte and more recently with Highgate, as well as a 4-way Glossolalia split with Earthenwomb, Enbilulugugal, and Graveterre. When was “Scour” recorded, in relationship to the tracks for those other splits?

:: The three splits were actually recorded at wildly different points in the collective; the track for the Glossolalia split (“Orthodoxy,” perhaps an ironic name in hindsight) was recorded in 2010 and is the missing link between our black noise work and the torture doom. This was before //’s involvement on bass and features a small avant-percussion installation and live electronics–probably the most backward way of making relatively straightforward and primitive black noise we could have created. “Vacant Cellar” was recorded for the Highgate split during a period of intense Venowl work in early 2013 and has the solid muscle to show it. “Scour” was our third attempt at creating a satisfactory work for the Cara Neir split and wasn’t created until July 2014.

“Scour” sounds like it was recorded live in one take, but that’s a guess.  Is it a good guess or an incorrect one?

][ Yes, all our music is improvised, with maybe a few ideas semi-planned beforehand concerning basic structure and dynamics.

:: It’s absolutely correct. Part of the filth and chaos of Venowl stems from recording live with very little isolation; everything interacts just right, everything is pure, and everything affects everything else. Our limited work with overdubbing has to be just that–limited–to retain the sound we’ve created over the years.

How much of the song was mapped out in advance, as opposed to being improvisational (because it has a bit of an improvisation quality, too)?

][ Maybe a small fragment of an idea is thrown out before we enter the studio, and, even then, that might not happen. Everything is chance. Everything builds atop everything else. Amorphous violence begets chaos and chaos begets unpredictability.

:: The arc, intentions, and spirit are composed. Nothing else; even on our very first work as a full group, ][ and //’s filth was synchronized. Often, live performances involve a set of ideas retained from the most recent work, down to changes in orchestration and specific rhythmic and harmonic statements, but our maximum reiteration of a set collection of ideas to date has been about five versions of “Gnawed Gristle and Bone.”

// On occasion, particularly for live shows, we will discuss a loose structure for a song. When performing live we may decide to include thematic elements from a previous release. More often than not, we will lay out a basic map for developments in dynamic and “style” throughout a song. Whether or not that template is recreated just depends on manipulations that occur during the actual performance.

What can you tell us about the process used by the band to construct the song?  It’s obviously a long, dense work, and not something that germinated from a catchy riff or two, or any melodic hooks.  How did it evolve and take shape?

][ Due to our improvisational nature, each new session and live manifestation/performance acts as development toward the next one. We meditate on what we enjoyed from previous efforts and wanted to develop more and, conversely, failures we feel we need to abort. So, at the risk of sounding pretentious, “Scour” is the culmination of almost exactly two years of Venowl as a full-band entity.

:: Again, arc, intentions, and spirit are composed. Specific motives result from the first attempt at filling a matrix and are reached through inspiration and connection rather than the typical contest of musicians searching for a hit in their home masturbatory sessions.

// As was previously answered, we will occasionally lay out the groundwork beforehand. But from there it all emanates from the improvisation. While we all understand the tenants of theory, we don’t particularly use that to guide the music. We rely, to an extent on non-verbal communication with each other and watching what each individual is playing, potentially to predict what is coming next. More than anything it’s an experiment and an attempt to connect with the entity.

Like much of Venowl’s other recordings, “Scour” is so unrelentingly harsh, chaotic, and devastatingly grim, that I wonder what inspires the three of you to create such harrowing and destructive sounds?

][ It just sort of comes naturally, I guess. :: and I had been crafting sounds together for three years before we invited // into the fold, who already had a deep understanding as to the direction in which we saw Venowl heading. We learn to follow each other’s body language and facial cues as a means of letting “ideas” flow into one another. :: and // are very good at signaling climaxes and extreme dynamic shifts.

:: Everyone and everything. Nothing exists but ideas and emotions.

// To me, Venowl is an entity and its own grouping of ideas. It’s not so much inspiration, but an attempt to manifest the essence of that. But, to be realistic that essence is the culmination of the subconscious of each of us. While people more often equate harsh and grim to hateful, this is, for me, more about connecting to something more isolated and abstract. For all of us, performing in Venowl is cathartic, but I personally try and keep humanity out of the equation.

It’s difficult to tell from listening whether there are lyrics in the song or simply wordless expressions of pain and despair.  Are there words?  And if so, what can you tell us about them?

][ We rarely have any words previously planned out, lest we decide on a tentative title beforehand, so “lyrics” end up being a strange mix of glossolalia and stream-of-consciousness. Whenever I end up using actual words, more often than not, I find myself drawing from my life-long struggle with night terrors.

:: On rare occasion, words seep through the mire of the spirit’s foreign tongues. Many works are devoid of recognizeable English, even to us.

// The only time there are words are when there are predetermined lines to use and repeat, other than that it’s merely vocalizations or words made up on the spot.

And by the way, what form of torture was used to produce those shrieks?

It may be entirely unimportant, but I’m curious why the three of you identify yourselves with typographical symbols rather than names?

][ The anonymous beings who comprise Mamaleek answered this question perfectly in an interview a few years ago: “I don’t want to be responsible for such ugliness. We remain anonymous like God does…Who would want to be exposed for conceiving of such a reprehensible species?”

:: Lines, patterns, and forms belong in the work and language as a whole does not. Every work is a totality; even choosing to present oneself as an “unmodified” being and personality is a choice and a falsehood. We did not make that choice here, but chose to subsume the selves.

Thanks for your time — if you have any further Venowl news you’d like to share with our readers, please feel free to do that.

Things are always stirring. Thank you for your interest and time.