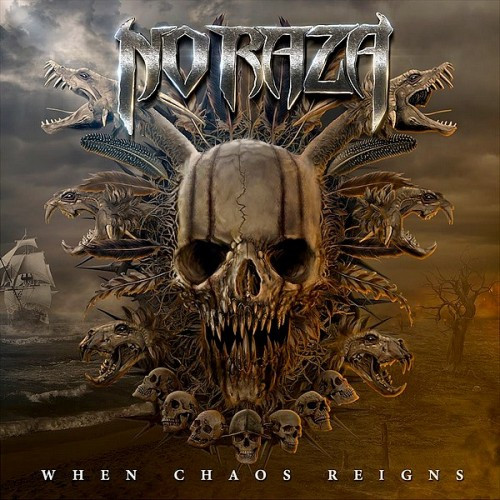 The band was apparently originated as early as 1997, but the first sign of life was the debut album from 2004. This was followed by a live album, video, and an EP before the sequel was released in 2012. I’m new to this band, and my enthusiasm for their death metal is due to several factors.

The pace, for example, certainly appeals to me. It’s rapid, without any “derailing effect” of the speed being at the expense of anything else. Drummer Jairo Gómez delivers some solid rhythms and tight blast beats, while he uses the sticks very well. (Not as creatively as Igor Cavalera, mind you, but who does?). Juan Guillermo Cano‘s vocals consist of soul-shaking, indecipherable grunts. No wonder we have abandoned clean vocals. If there’s anything describable as a “pleasant growl”, this is it.

He also handles the rhythm guitar, where he does a lot of hefty shit. Tremendous riffing with significant variation, I’d say. The solo guitar is handled in an impeccable way by Juan Camilo Sanchez, demonstrating that good melodies don’t have to come at the expense of rawness. Alexander Palacio‘s bass could advantageously have been a bit more audible sounding, but the music obviously would have sounded impoverished without it.

The pace ain’t totally blistering, but it’s still swirling swift like a hurried hurricane, and the expression is hard as granite. These guys also master adding in lots of variety, groove, melody, and occasionally surprising elements. In addition, their death metal has a certain mighty grandiosity in the vein of Behemoth, et cetera.

I would rather hear this album over time, and give a more specific and accurate description of the amount of identity that the songs have, but I can at least say that every song includes enough melody and variation that I presume they’ve got all the character needed to create a record with lots of diversity. The sound is good, and helps ensure that all elements are given the punch they need.

When Chaos Reigns was a positive surprise to my ears when it was released independently on September 1st. 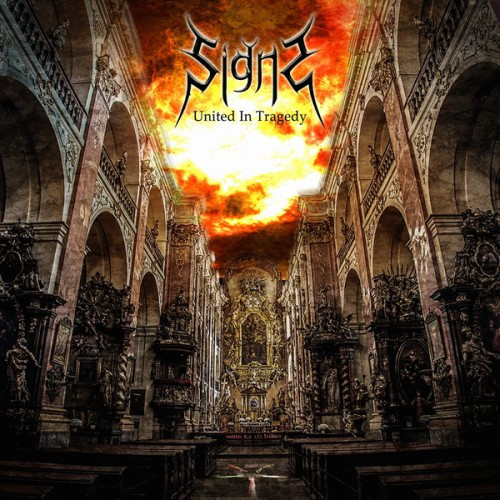 We’re going next to Georgia, a small country between Turkey, Armenia, Azerbaijan, the Black Sea, and Russia, where we find four guys who play symphonic black metal. When they started in 2009, Borknagar was their greatest source of inspiration, but the band never found anyone who could do the clean vocals well enough, thus Signs fractured in its foundation and cracked up. Completed material for an entire album was laid aside, never to see the light of day, unless ICS Vortex himself volunteers to do the vocals. (Do you take the challenge, Simen?)

After various lineup changes the band changed character, moving toward symphonic black metal. The debut was released at the end of 2012, and this is the sequel, with nearly 50 minutes distributed on eight tracks. The drummer doesn’t hold anything back, so buckle up. The vocals are amongst the blackest on the other side of the Black Sea. The melodies prevent monotony or any feeling of prolonged repetition, and conjure up nostalgic memories from old Dimmu Borgir piano style.

Yet some of the melody lines feel a tad random, and I feel this band has some room for melodic improvement. That said, I won’t rule out that they will be able to come up with even stronger melodies in the future.

That’s the only real negative remark I can think of at the moment, though. I have not had the time to let the material sink in properly, but I have a strong intuition telling me it will grow given the time. No matter what, I think United in Tragedy is a cozy, unchristian way to spend an evening along with candles and red wine.

United in Tragedy was released by M & O on September 1st.

There is also an album stream available here: 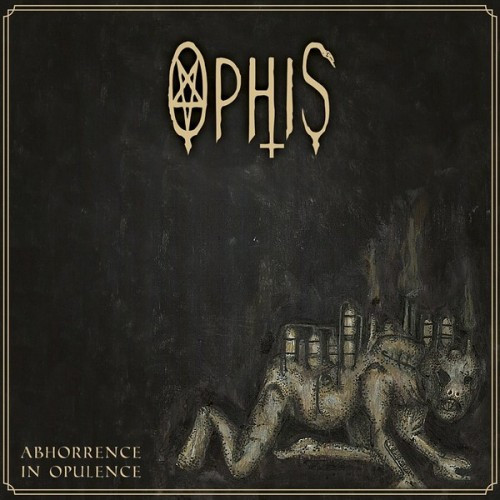 The German quartet Ophis has released their third full-length album. My first encounter with these fellows was their last album, Withered Shades from 2010.

I can’t say I recall the music vividly, but at least I remember the release, which is not bad considering I’ve got the memory of a goldfish. The landscape we boldly stray into is a barren and bleak one consisting of a form of death/doom with elements of funeral as well as dsbm.

This is a mixture that does not create a very cheerful atmosphere. The album is overall fairly gloomy and ominous. Some parts are less frightening. One might even say it’s beautiful, if one is thick-skinned that is. There are also real flashes of light, like the quiet string ending of “Among the Falling Stones”. Still other sections exhibit more discomfort, anger and disgust. Large parts of the album are in a murky pace, and it varies nicely between quiet, downtrodden elements and more metallic mud-wading. When speed increases, the atmosphere becomes more threatening, and hateful shadows emerge from the catacombs with their tools of torture.

In the jungle of sluggish, atmospheric, and dystopian releases, Abhorrence In Opulence might not differ a lot from other similar releases, but the album is very well conducted in a coherent way, and the sound is as rich and thick as infernal flames devouring your soul as it departs your rotting corpus. Not completely as infamous, disturbing, and nasty as expected, but the varying degrees of sadness and disgust are well looked after.

The album lasts for an hour, so be sure to fill up your glass before departure. Recommended for an audience such as yourself if this sounds alluring.

Abhorrence In Opulence was released by Cyclone Empire on September 5th. 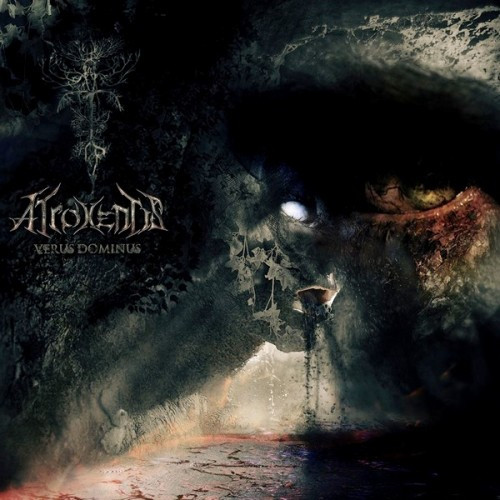 If a band plays black or death metal… all the world’s double pedals and full speed ahead will not make them interesting unless they have something more to offer. Belgian Atroxentis have a lot more to offer!

After a dark and moody intro including harp, strings, and percussion, a monumental composition commences. The band’s sophomore album consists of five songs, four of which are just above the 10-minute mark, and one that is practically “stalking” — at 14 minutes, it’s only a few feet behind.

According to The Font of (nearly) All Metallic Knowledge, the band is listed as a black/death metal band. (When this review was first written, it stated Black Metal). There are elements of black here, but it is death metal that reigns. And it is powerful.

Variety is a key word. With a juicy and deep sound, Sven pounds and punched the drums through thunderous blast beats, technical percussion, and constant rhythm changes. The vocals are created someplace deep inside the human troll Yannick Herbaux, who also handles one of the barbed-wire battle axes. Along with Olivier he creates gargantuan riffs and melodies, while Thibaut commands the earth to shake and rumble by generating low frequencies.

There’s something going on at any given second. Cold atmospheric melodies, raw rhythms, rough riffs, and impressive twists.

Atroxentis showcase far more depth, substance, and finesse than I’ve ever heard amongst ultra-brutal death metal bands. The album is played in a more hypnotic and structured fashion than what is common amongst technical death metal. The melodies are dark, gloomy, somber, and evocative — more so than in melodic death metal. The mood is where the swart metal comes into play. Also, they blend too much and are too daring to be compared with old school death metal.

Thus, one has to conclude that this daring masterpiece sticks out in all its vicious, barbaric, and horrifying might. At least that is what I prefer to conclude. Give it a couple of rounds, with solid volume to reveal all of its details and attributes. Afterwards you will crave for more. 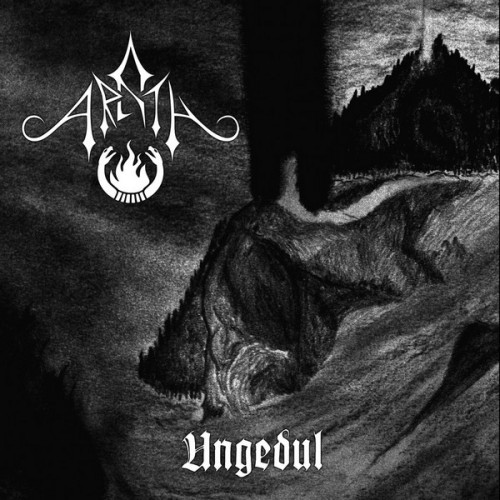 The second album from German Arath is reportedly the second part of a trilogy. It is written that «In this part of the journey ARATH encounters the deepest depths of his soul and has to master the dark challenges…». Apart from that, I know nothing whatsoever about this black metal trio. So let’s rather concentrate on the 40 minutes of black metal the band has recorded.

I presume that those who continue reading have got room for even more black metal in their collection, so let’s skip the obvious cliché that you have heard this before. We know our syllabus of old classics by heart, so give us more. Bring on the frosty chill and infect us with cold and fever. Soak us in that liquid nitrogen, dammit!

The question is then whether or not three unknown Germans manage to lower the temperature enough to impress us. Well…

The guys have some work to do with their song construction, but they actually have reasonably good control over the thermostat. After an intro with brass, bringing anticipation of Arctic conditions, we cross into familiar territories, with the presentation of slightly woolly, but alright sounding black metal with fast riffs and passages of slower kinds. Frosty bitterness and hate reign in this realm.

The songs could, as mentioned, have been stronger, but their structure does its evil deeds. Instrumentally, the band do a great job, and the vocals are pure hate and misanthropy. After five songs they end this séance with “Glarkommer”, an 11-minute atmospheric piece consisting of synth and organ — perhaps not on the same level as, but in the vein of, Burzum releases such as Hvis Lyset Tar Oss. With a little more power and punch in the production, it would have been more bombastic and sharp, which would have served it well.

If you’ve already got all classic Nordic black metal in your shelf, you don’t really need this release, but if you lust for more this just might appeal to your diabolical taste.

For those who dwell underground
and cultivate hatred and wrath
Ungedul lacks the most original sound
but spreads frost and dismay on its path.

4 Responses to “METAL NOT PREVIOUSLY FEATURED ON NCS — PART 2”