(This is the completion of a review that, in effect, began when I premiered the first advance track from the album.)

Two years ago Blut Aus Nord produced its last full-length album, Cosmosophy, which brought to a resounding close the 777 trilogy. Every album in the trilogy drew praise from critics and fans alike, despite the fact that no one of them sounded quite like any of the others. Cosmosophy left wide open the intriguing question of where Vindsval would go next — though in fairness, with a band as inventive, idiosyncratic, and contrarian as this one, that’s always a question.

Where Blut Aus Nord has gone next is Memoria Vetusta III — Saturnian Poetry. Having completed the very personal 777 project, in which Vindsval chose to work alone, the new album features a new drummer, a superb human one named Thorns, as well as stellar cover art by Kristian “Necrolord” Wahlin. But what about the music?.

The reappearance of the Memoria Vetusta title will no doubt have fans thinking about the first two albums bearing that same name, despite the fact that Dialogue With the Stars followed Fathers of the Icy Age by roughly 13 years and Saturnian Poetry comes more than five years after the release of Dialogue. In short, this is no trilogy; unlike 777, these are not three parts of a single massive piece of music. But at the same time the resurrection of that title, which refers to memories of what is long past, was not done carelessly — the new album makes a fitting companion for the first two. Standing alone, Saturnian Poetry is a superb achievement. 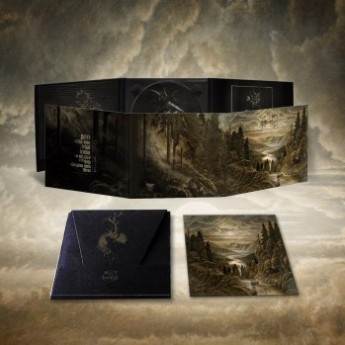 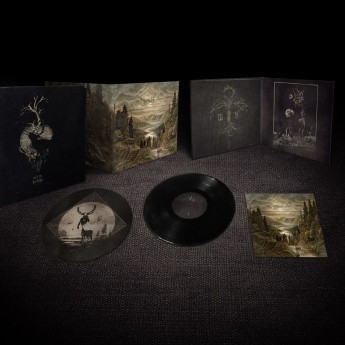 The album begins with a slow, dark keyboard instrumental, at times sounding like an organ whose notes are emanating from the mists of time past. And those are the last moments of calm on the album.

“Paien” follows the prelude, and it’s hard to think of a better word for the song than “epic” — though “majestic” and “mythic” also come to mind. It beckons the listener back to an ancient pagan age, its blazing riffs, furious percussion, sweeping keyboards, and soul-stirring melody summoning images of warlike gallops through forests of the icy north.

But although the ravaging riffs and blasting drums (and Vindsval’s cracked-glass shrieks) will resonate with fans who hunger for more “traditional” melodic black metal, the song is not all one thing. As the racing charge slows, the music’s atmosphere changes, becoming more dark and melancholy (and more openly beautiful) — but without losing the air of majesty and the sense of a saga unfolding that is a constant in “Paien”.

What follows is a succession of songs in which BAN employs the same kind of craft exhibited in “Paien”. They all begin with fiery riffs and rapid-fire drum blasts — and they all eventually change. They all include soul-stirring melodies — sweeping, heart-swelling, and sometimes heart-aching melodies. In each one, high-pitched, trilling guitar leads appear in a way that’s electrifying and memorable. Throughout the album, the blasting, somersaulting, booming percussion will grab your attention. In every song, the band plays out gripping musical motifs, repeating the various segments enough times before changing them that they burn the mood (and the notes) into your head like a brand.

The songs are kindred spirits in an even more fundamental way. Somewhere I came across a fan comment on the few songs that have premiered so far applauding Blut Aus Nord for returning to “icy cold black metal”. I acknowledge that different listeners hear almost every piece of music in at least slightly different ways, but that’s not what I hear in Saturnian Poetry. There are certainly strident, pulse-pounding, warlike passages (and a few chilling moments here and there), but what unifies these songs is passion.

This is music with a panoramic and even cinematic sweep, music with an air of stateliness and grandeur, dramatic music that takes you out of yourself and carries you away from the mundane concerns of daily existence. I defy anyone to hear the album — or even any single song — and not imagine (or even aspire to) deeds of courage and sacrifice. 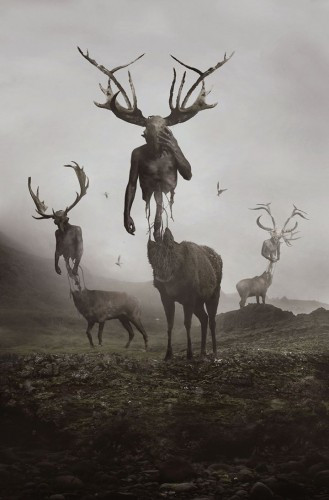 But a sense of loss is also one of the moods that consistently reappears in the album. Even in the most intense parts of these songs, when the riffs come down like sheets of wind-driven rain or rake like a thousand claws, the melody carries an undercurrent of peril and tragedy, at least to my ears. Even in “Metaphor of the Moon”, one of the most intensely ravaging songs on the album, there is a feeling of despair in the frenzy. And when the music on Saturnian Poetry slows, it almost always becomes sombre and heavy, with the power of the low frequencies and the melancholy undercurrent of the melodies becoming magnified.

While the songs are all much more alike than they are different, they are so well-conceived, so well-executed, and so memorable that they still left this listener wanting more, not less. Even the small moments are as engaging as the grand ones. One of my favorites is a comparatively quiet passage in the middle of “Forhist” devoted to a reverberating solo guitar melody — followed immediately by brazen riffs that ring like a trumpet blast and the reappearance of one of those high, trilling melodies. Yet another comes during the closing track “Clarissima Mundi Lumina” when Thorns launches a pattern of rolling double-bass and booming toms that’s galvanizing.

I’ve barely mentioned the vocals, but they are of secondary importance. They are mainly scarring, scraping shrieks, mainly appearing in the most aggressive segment of each song in order to amplify the music’s intensity, but they’re submerged in the mix so as not to detract from the power of the guitars and the drums. On those few occasions when clean, choral voices rise up, they’re a beautiful addition to the music’s epic qualities.

It probably goes without saying, based on what I’ve already written, but the production of the album matches the music very well. The degree of reverb and distortion and the layering of the guitars in a way that magnifies the music’s potency combine to drive home the emotional impact of the compositions. It makes listening to the songs an immersive experience.

People who treasure the spirt of viking Bathory, Emperor, and Dissection will treasure this album. People who treasure Memoria Vetusta I and II will also treasure it. And despite the album’s often melancholy ambience, I’ll go out on a limb and say that any extreme metal fans who are romantics at heart — people whose imaginations are captured by heroic myths and legends, people whose idealism hasn’t yet been flattened by life’s disappointments — will treasure it, too.

Memoria Vetusta III — Saturnian Poetry will be released by Debemur Morti on October 10.  The album can be pre-ordered in a special digipack CD edition here or on vinyl here. Debemur Morti has also established a Facebook page for the album here. Listen to two songs from the album below.

UPDATE:  You can now listen to the entire album, because it’s streaming in full right here: