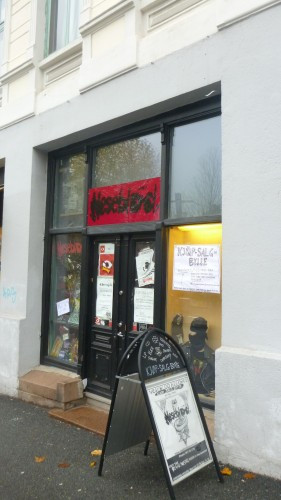 (We welcome our guest Jeff from Life In the Vinyl Lane, who will be reporting on the Iceland Airwaves festival in the near future.)

This is Jeff from the Life in the Vinyl Lane blog, coming to you from the land of the midnight sun and black metal, Oslo, Norway. I’d asked Islander if I could send a dispatch from this year’s version of Iceland Airwaves, which is just around the corner, and while I was at it I figured I’d tell you a bit about what’s out there for metal fans who might be visiting Oslo, since we stopped off here prior to the festival.

Now, to be fair, at least 99% of the No Clean Singing readers are probably bigger and/or more knowledgeable metal fans than I am. Let’s get that out there right from the start. I came of age in the early 1980s, back when you couldn’t turn on MTV without seeing Quiet Riot and Mötley Crüe videos in regular rotation, before metal was ghettoized into “Headbangers Ball”. So while I discovered the genre in the 80s, I didn’t advance too much past there — the hardest stuff on my shelves are the classics like Iron Maiden, Metallica, and Slayer, and most of the bands featured on No Clean Singing are new to me, with the notable exception of Iceland’s Sólstafir. Maybe that makes me a tourist here. I don’t know.

Be that as it may, I knew that since we were spending a few days in Oslo prior to Iceland Airwaves this year, I owed it to myself to check out Norway’s black metal scene, and some quick research indicated that the one “must visit” stop on the trip was Neseblod Records.

Neseblod is a bit off the beaten path — about a 30 minute walk from our downtown hotel, though maybe only 10-15 minutes from the main city train station. It’s not in the kind of area you’d expect to find a record store, away from the typical shopping areas and nestled into an older building right next door to an upscale indie coffee shop. But the second you step inside you can see why this place gets the props it does. 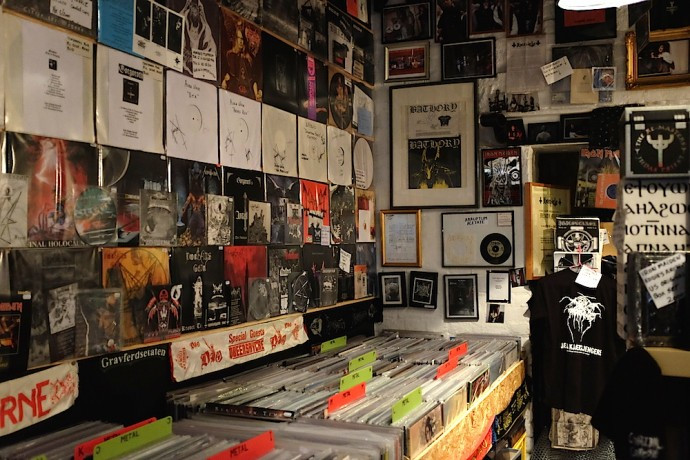 Neseblod is small and absolutely packed with more black metal than you can believe even exists in the first place. The 12” vinyl for the genre runs probably 12 rows wide, with rarities on the walls and additional space for 7”ers. CDs, tapes, t-shirts… if you can think of it, it’s probably here, and with multiple copies. I’d done a little research ahead of time and decided that if I was only going to pick up one or two black metal records that I’d want to stick to the classics, so Mayhem and Burzum were at the top of my list. Not only were they pioneers musically, but they also factored into some of the true bizarreness that surrounded the genre with the suicide of Mayhem singer Per Ohlin and the murder of the band’s guitarist Euronymous by Burzum’s Varg Vikernes. Plus, you know, all those church arsons and such.

Neseblod had a separate section devoted to Mayhem with a good 30-40 assorted albums, and I eventually settled on a 2003 re-release picture disc of the band’s 1987 Deathcrush, in part due to the price. You see, Oslo is crazy expensive ($5 for a tallboy at the grocery store…), and Neseblod only takes cash (technically I was told “I don’t take Master Card”), so that limited my options a bit, but I was happy with the purchase.

I asked the guy working there if the store’s famous Black Metal Museum was open, and he said yes but admitted a bit sheepishly that “there’s not much set up down there.” But he was willing to unlock it for me, so I followed him down a metal spiral staircase that I previously failed to noticed because it was entirely obstructed by t-shirts, past the punk and rock vinyl sections and into an eerie basement that had me questioning my decision. But he left me to my own devices down there, and it was bizarre, but there wasn’t a ton to see. A guest book, a big iron candle holder with a pentagram, a wooden coffin, and some assorted posters, art, and drumheads. There were some locked cabinets down there that I assume contained some of the more interesting items, but I didn’t push the issue, shot a few pictures, and headed back up to daylight. 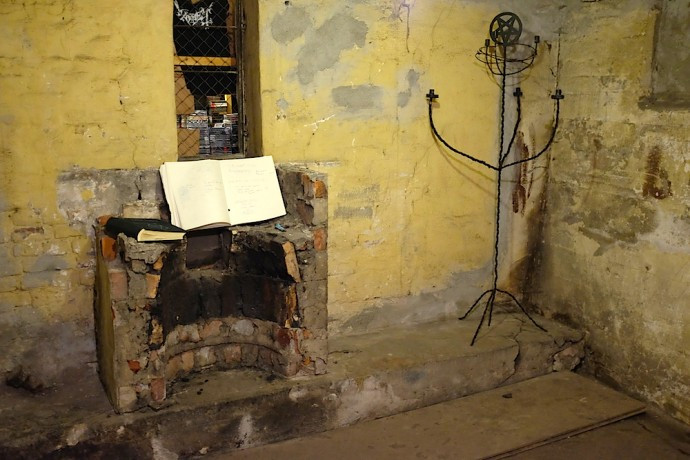 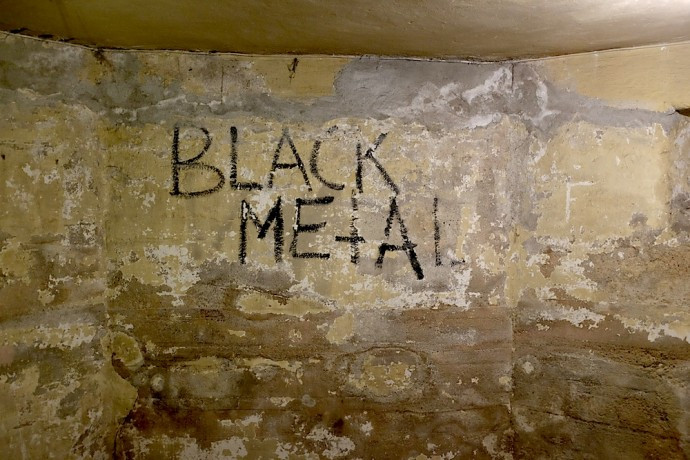 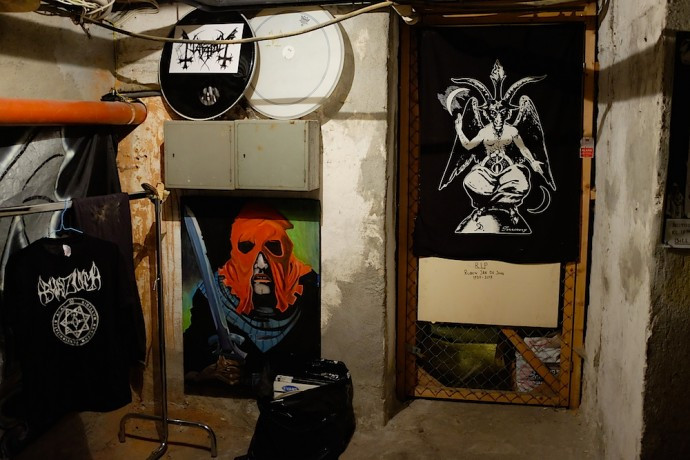 We hit up a few other record stores as well. The biggest was Råkk go Rålls, a big shop spanning three levels with a broad selection, including a robust punk rock section, but not a whole lot for the metal fan — maybe eight rows of vinyl and some seemingly pretty typical stuff, with lots from the NWOBHM. Tiger Records had a much better selection of the local stuff including punk and black metal and is a better choice to follow up your visit to Neseblod.

We didn’t see a lot of other evidence of black metal here in Oslo — a handful of dudes in patched-up jackets, but that was about it. I’m sure there’s more to see and experience if you have the time and inclination to do a little research, but if nothing else a trip to Neseblod will eat up a few hours of your time and leave your wallet hundreds, if not a few thousand, krone lighter. Just remember to bring cash!

5 Responses to “A DISPATCH FROM NORWAY”