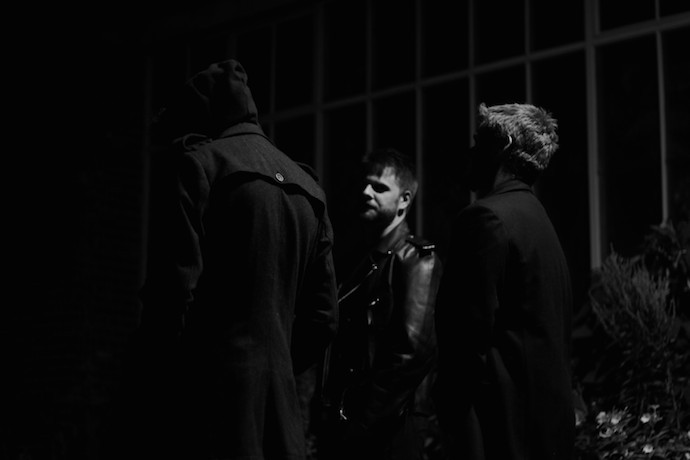 (About one week ago we premiered a song from an album by New Zealand’s House of Capricorn that has rapidly become one of my favorite records of this year, even though it might seem like an odd fit for a site with our name. Today, we’re lucky to have New Zealand-based metal writer and broadcaster Craig Hayes’ interview with the band’s impressive vocalist Marko Pavlovic.)

Over ten-thousand miles separate New Zealand’s harbingers of apocalyptic devilry, The House of Capricorn, from their new label, Finland-based Svart Records. Still, evil knows no boundaries, and the meeting of minds between Svart, one of the most captivating labels around, and The House of Capricorn, one of the most riveting entities in the ritualistic rock ‘n’ roll underground, makes for the perfect Mephistophelian pact.

On November 9th, Svart is releasing The House of Capricorn’s third full-length, Morning Star Rise. The album is one of the year’s best examples of profoundly wicked music wrapped in a black-hearted aesthetic. Drawing from the cauldron of gothic rock, black metal, and deathrock, the stench of hellfire and eternal damnation pervades all of Morning Star Rise. But it hasn’t always been that way for The House of Capricorn.

The band’s  2010 debut, Sign of the Cloven Hoof was hued closer to stoner doom than diabolic rock, but the band’s sinister second album, 2011’s In the Devil’s Days, marked a distinct change in tone for the band. Morning Star Rise sees that change set in stone, with its unholy incantations surrounded by a fantastically ill-omened aura.

There’s no other band on New Zealand’s shores that comes close to making the kind of fiendish heavy rock that The House of Capricorn does. And the band’s lead vocalist, Marko Pavlovic, was gracious enough to answer a few questions for No Clean Singing about the band’s history, his creative process, and Morning Star Rise’s creation.

Before we get to The House of Capricorn, let’s go right back. Tell me about what spurred you on from simply being a music fan to wanting to create your own music.

Rethinking this question over and over, I can’t really seem to remember. At age 14 or so I definitely wanted to be Peter Steele, but I don’t know if that can be particularly considered as any kind of ‘pivotal moment’ – more just typical idol-emulation. But I guess the first time I saw the video for “Black No. 1” everything about it made me want to live Halloween, and create something along those lines. That’s probably as close to an initial-creative-trigger as I can think of.

Talk me through the history of The House of Capricorn. Did you have a set artistic goals in mind for the band when you started?

Theme-wise, from day one, cloaked unholiness was central to HoC. I remember chatting with drummer C. Sinclair from Diocletian around 2007, and he said, “the thing about HoC is that your lyrics are so Satanic, but they’re so undercover”. (Disclaimer: This is not to say that C. Sinclair likes HoC. I haven’t seen him in a few years, but if I were to make an educated guess, I don’t think he would. Haha.) Over the years that cloak rolled back, and the aesthetics and delivery became more overt. This happened naturally as we slowly stepped away from the more stoner/bluesier stuff we were doing, and shifted to a more consistent darkness.

No band is without their influences, and you and I have spoken in the past about a few of New Zealand’s metal and heavy rock musicians being helpful in that regard. But, The House of Capricorn sits well outside any easy categorization as a New Zealand band. So, where have you drawn your inspirations from?

Musically and thematically it was always a 100% international influence-set for us, and predominantly in the gloomy-rock and black metal realms (probably a given). If I had to list the top groups for The House of Capricorn, it would be Type O Negative, Babylon Whores, Mortuus, The Sisters of Mercy, Mayhem, Craft, and early Shining. Where a musical influence isn’t prevalent from those bands, a thematic influence is.

Attitude and approach-wise, a lot of the inspiration comes from a combination of being an unashamedly natural contrarian in many areas (probably why, while surrounded by extreme metal bands, I wanted to do this shit), and endless conversations with my best friends and peers about things we significantly don’t like. The amount of discussion I’ve had with people like Jamie (Ulcerate), L. Muir (Diocletian), and VK (Vassafor) about what not to do in music is phenomenal.

There’s a marked difference in tone and temper between the band’s debut, 2010’s Sign of the Cloven Hoof, and 2011’s follow-up, In the Devil’s Days. How do you see the progression between the two albums? Or is progression perhaps the wrong word?

I look at it as progression, but only because the process happened in my head. I guess some people would look at it all as blatantly stepping to the side — especially as they came out within 18 months of each other — which is fine by me. The reality is, we recorded Sign of the Cloven Hoof in Dec ‘08 and Jan ’09, and half of the material is made up of songs that had been around since the early-mid 00’s. It then didn’t end up coming out until March 2010. One of the last songs we wrote for that album was “Claws of Fog”, and I think that is a relatively good foreshadower for what we developed towards on In the Devil’s Days.

I guess a lot of bands that take a long time to release their debut album face that kind of situation, where their body of work’s style might change over time, but in the end its all compounded into one volume. But like I said, subjectively it all makes natural sense, but I can see how the shift may seem stark.

I must also mention that the shift in sound was definitely intended, and a contributing factor was looking at my friends’ brilliant bands Soulseller and Second Gear Grind, and thinking, “these guys do this kind of thing a lot better than us – let’s do something else”.

It’s been three years since In the Devil’s Days, and your new album, Morning Star Rise, is the band’s best yet. That’s obviously a welcome reward for the wait for me, but what was the songwriting process for the album like for you? Has the band spent three years slowly working on the album?

I started writing for Morning Star Rise immediately after we released In the Devils Days (Oct ‘11), and I had half of the songs basically ready within a few months. Everything was completely written by the end of 2012, but we didn’t track it until the end of 2013.

Looking at it now, it does seem like a long time between drinks. The songwriting process was exactly the same as always, but with Ami (Holifield, ex-bassist) leaving at the start of 2013, the rehearsal/recording schematics were different, I guess. The year before tracking really was just a matter of getting the songs to a suitable level, tweaking here and there.

Last time round, on In the Devil’s Days, you had Ulcerate drummer Jamie Saint Merat helping out with engineering, mixing, and mastering the album. How did you approach recording this time round?

As always, for tracking, we dry-hired a couple of rooms (‘Depot Sound’, ‘The Rock Factory’, and ‘La Maison de Ray’) over a few weekends and summoned it all with Jamie at the altar. Not only is he one of our best friends, he’s ‘our engineer’, you know. And if he’s got a suggestion, he’s a guy we’ll listen to. He knows what we’re trying to do, which I think is important.

For mixing and mastering though, we took a different route. Orthodoxyn by Arkhon Infaustus is one of my favourite albums of all time, and a good portion of this is due to the way it sounds. I remember the first time I heard it was in 2007, and I was killing time in a little record store in Tauranga (of all places), and for whatever reason they had the vinyl. I remember sticking it on the turntable and putting the headphones on. Jesus Christ. I don’t even remember the last time I heard an album’s production that nearly exploded my head like that.

So, for Morning Star Rise, I got in touch with Francis Caste — the man behind Orthodoxyn — at Studio Saint-Marthe in Paris. It all worked out to be viable for us to track with Jamie and then get Francis to mix and master it. Success. I think it was a great idea. (NB: The other stuff Caste’s done, like that last Kickback album, that Necroblaspheme EP, and the Hangman’s Chair records, are also amazing.)

The presence of gothic rock and deathrock seems a lot stronger on Morning Star Rise. I’m feeling the chill of post-punk and black metal creeping in there, too, which makes the album more diverse, multi-layered, and packed with detail. But, those are just things I’m hearing. What’s your take on how the band’s developed on the new album, and what are you aiming to present?

We spent a lot more time ‘producing’ this album than the last two, and taking more time to work out counterpoints and harmonies for sections. I recorded quite a few more vocal harmony tracks than usual, too. And yes, you’re right, those goth/black metal elements are definitely there, and completely conscious. I think I pushed them as far as I realistically could into the songs without making The House of Capricorn something it couldn’t (and shouldn’t) be, stylistically.

With both of the above points in mind, we were trying to present a dense, spooky atmosphere across what is our ‘rock n roll platform’; similar to In the Devils Days, but also in a richer way with a bit more focussed emphasis and nuance. And definitely in shorter-song format (for the most part).

The band’s hooked up with Svart Records for Morning Star Rise’s release, which is pretty damn exciting given the label has an eclectic roster of artists that The House of Capricorn fits right in with. How did that connection come about?

I’d been in touch with Svart since I found out they were planning to do the Babylon Whores boxset (this would’ve been back in 2011). I was amazed at the approach, attitude, and output, as well as their curation (after all, a label is determined by its curation and output, right?). And I still am.

Svart was my personal very first hope/choice, so as soon as we had something worthwhile recorded I sent it through for them to check out. Thankfully they liked it. And here we are.

Morning Star Rise will be released on November 7 and can be pre-ordered on CD here or on LP here (and it comes with a download code). Two songs from the new album an be heard below.

2 Responses to “AN NCS INTERVIEW: MARKO PAVLOVIC (THE HOUSE OF CAPRICORN)”