(DGR provides this review of the latest album by NOLA’s Goatwhore.)

Stupid late, and we know it, but as the end of the year approaches one of our worst habits is to panic  — or more correctly, I panic, because most of the guys on the site are pretty relaxed — about the massive number of albums that came out during the year that we didn’t get around to reviewing. Not only that, but there’s always two or three un-reviewed albums where it feels right to provide a forum for our users to discuss the disc alongside our own feelings on the album. Goatwhore’s Constricting Rage Of The Merciless is one such disc.

It was an album that, as far as I know, was suddenly just “Out”, and the only review we were able to stammer out for it at the time was one of Andy’s haiku reviews. While those are great and a fun exercise, and I do recognize the difficulty in trying to hammer a disc down to just three lines where I prefer to go the opposite route and provide massive walls of text, sometimes there’s an album in there that I generally regret not being able to give the full “review tome” treatment. 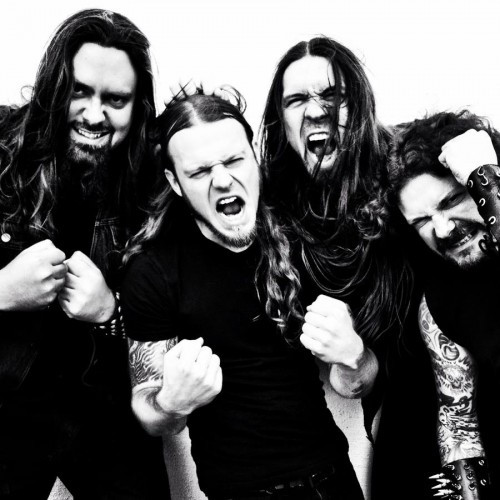 So, let’s fire up the grand NCS time machine once again, for what I imagine will be a couple of trips before the year-end lists start dropping, and go all the way back to July — back when my lovely home of Sacramento was in the throes of weekly 100-plus degree days — and we’ll pretend like it isn’t November and actually threatening to rain (although we’ve learned better, its not going to, that’s for people in the Pacific Northwest) and talk about Goatwhore’s sixth full length album, Constricting Rage Of The Merciless.

While it is probably super un-kvlt of me to admit this, I discovered Goatwhore the same way I imagine a lot of folks did — with the “Alchemy of The Black Sun Cult” video from A Haunting Curse. Since then, I’ve been a constant fan of the group as they’ve shifted away from a traditional black and death metal hybrid to music that has a serious amount of rock and roll in it.

For as serious and frightening as they look (Ben Falgoust himself has a tremendous stage presence, the couple of times I’ve been able to see them live), the band have a serious rock and roll aspect to their sound that hasn’t lightened up over the years. Much like the band’s prior releases, that element of their sound hasn’t lessened one bit in the newest album. Goatwhore once again have set forth a pretty tasty plate of death n’ roll — one with a couple of real surprises on it.

It’s somewhat accepted wisdom at this point, but Goatwhore have reached Amon Amarth levels of consistency, in that not everything they do will stand out, but there’s really not a “bad” Goatwhore song these days; they’re one of the most shuffle-friendly bands out there. Part of that is due to the group’s remarkable stability; the lineup hasn’t really shifted much in the past six years, with the bassist being the real big changeout and that… was two albums ago.

Goatwhore has very much become a place for guitarist Sammy Duet and Falgoust to rock the fuck out, while showing off the latter’s penchant for being a poet with his song titles. Constricting Rage Of The Merciless gives us another group of gems, including some serious word salads for us to chew on, like “Heaven’s Crumbling Walls Of Purity” and “Cold Earth Consumed In Dying Flesh”. Then again, this is also an album that has a song abbreviated as “FBS” — which expands out to “Fucked By Satan”. My personal favorite remains “Silence Marked By The Breaking Of Bone” from A Haunting Curse, but long story short, Falgoust knows his way around the turn of a phrase like few others do.

In comparison to the group’s previous albums, Constricting Rage Of The Merciless is the most pit-fueled and ballsy of the Goatwhore albums. There is some serious stomping swagger on this record, like outlier “Baring Teeth For Revolt”. That song has a bluesy rock and roll riff made heavy by the rest of the band and a gallop designed, it seems, for the sole purpose of making people run in a circle.

In actuality, the band don’t slow down until halfway through “Cold Earth Consumed In Dying Flesh”, so a full run through of Constricting Rage would probably be five songs of intense circle-pitting and then maybe a slight breather during the death/doom combo in the middle of “Cold Earth”. Then the song, of course, accelerates again to whip up a frenzy as the low and bellowed growls take over. “Cold Earth” makes it feel like Constricting Rage actually has a series of full-blown movements — and not just the circle-headbanging that precedes it.

In all honesty, few bands know their way around a circle-pit riff like Goatwhore do. The lovely “FBS” is another thrasher of a track and one of the album’s highlights — which I’m sure will lead to many hilarious discussions when people find you headbanging, and then you have to answer the inevitable question, “What in the world are you listening to?”.

The solo at about fifty seconds into the song is a delicious one, right out of the thrash metal handbook, and you can tell just by the album version that this track translates tremendously well live. It and “Baring Teeth For Revolt” are probably the most ROCK the band get on this album, although saying that somewhat discredits the monolith of death from which the band have carved Constricting Rage. That’s certainly not my intent, of course, but the songs do help break up the pulverizing to make room for some more traditional air guitar and windmilling combinations.

As a whole, Constricting Rage Of The Merciless has the sound of something penned by a seriously tight-knit group, seriously focused and dedicated to one goal. For some time, it hasn’t felt like Goatwhore have been playing by the black metal, “All Satan all the time” rule, or trying to keep up with the “Be heavier than everyone else” extreme sports competition. Goatwhore have settled into their formula, and it is one that still works damn well for them, marked by short phrases and anthem-like shouting, every song becoming a slogan in its own right.

I’ll fully own up to it that these guys are my heavy metal comfort food, and they haven’t done me wrong yet. When Goatwhore rev themselves up and are at top speed, they can make some of the best music out there, and it’s so awesome to say that Constricting Rage Of The Merciless is one of their best albums. They’re one of those bands where, in discussing their music, it feels like you’re speaking in varying shades and slightly different degrees of awesomeness; you really can’t “go wrong” with much of what the band have done.

I go to albums like Constricting Rage because Goatwhore know how to make me rock out like a goddamned idiot and hold my hand in the air, invisible orange lifted to the sky for all the world to see. They can do evil and sinister, but they do it more as a  background element — everything in the foreground is just super-heavy, arguably traditional metal, with a regional swagger that makes the band just rock extremely well.

We’re super-late on this review, and saying that a Goatwhore album is good begins to sound like one of those, “Sun rises in the east, sets in the west” sort of moments. It feels like Constricting Rage in particular has always been there, given how often I go back to it, but in order to get an official word out there from this site, or if you simply haven’t yet checked it out, Constricting Rage of The Merciless is a delicious album. Not the most innovative for sure, but Goatwhore pull off what they aim to do like an artisan with decades of training.

5 Responses to “GOATWHORE: “CONSTRICTING RAGE OF THE MERCILESS””