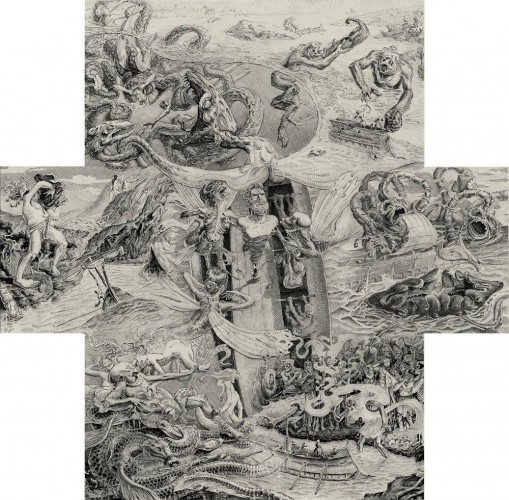 We’ve been writing about the Elemental Nightmares music project since July 2013, when it was barely more than a bright idea. We followed its progress closely and posted about each of the first four splits when they were released (and even premiered two of the songs from one of the splits). And then, in a big rush, Elemental Nightmares released the last two splits over the space of the last two days, with Parts VI and VII coming on Christmas Eve and Christmas Day, respectively. (This accelerated finish was actually part of the release schedule as it was announced back in August, but still caught me by surprise.)

For those who haven’t yet heard of this project, it began as a vinyl subscription series and changed a bit as time passed. In its final (and now complete form), it has released seven 10″ vinyl splits featuring songs from 28 up-and-coming bands, most of which we had previously written about at this site. Each release has featured one segment of a single large piece of art, and you can now see the complete work at the top of this post (click the image to view a larger version). It’s fantastic.

I subscribed to this series as soon as I could and have relished the arrival of each installment. Later, Elemental Nightmares began offering each split for sale on a standalone basis, and the music is also available for download on Bandcamp. I’m not sure whether vinyl copies of each split are still available, but if they are, they can be acquired via the Elemental Nightmares online store, here:

Needless to say, I haven’t started listening to the last two splits (and failed to write about the fifth one when it was released in late November). But I didn’t want to delay making this announcement. Below I’ve embedded the Bandcamp streams of the last 3 splits. They should make for delicious listening, because the bands featured on these last three splits are:

You can download these splits, and all the others, at this location:

2 Responses to “ELEMENTAL NIGHTMARES RACES TO THE FINISH LINE”