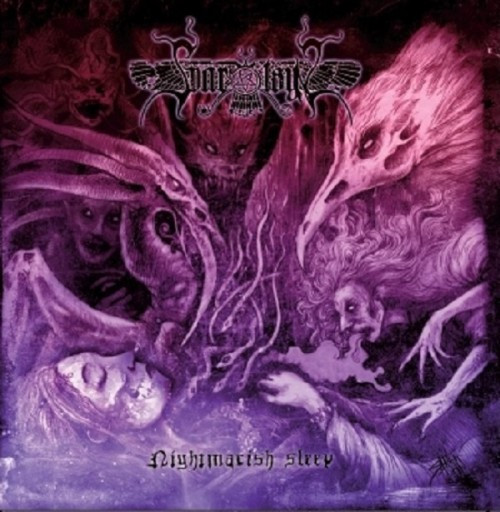 As another year gasps its last breath I’m once again feeling forlorn about my inability to review more of the fine metal I heard over the last 12 months. There’s no way to catch up now, of course, but I still feel compelled to make one last gasp of my own. With so much to choose from, I’ve chosen somewhat randomly,focusing on two excellent short releases that display just a fraction of metal’s phenomenal diversity. This is the first of these two reviews; the second will follow shortly.

I vividly remember the first time I listened to black metal. It was about 9 years ago, and it was something from one of Rotting Christ’s earlier albums recommended by a friend who felt I needed to broaden my horizons. I remember having a visceral negative reaction. It was so much more harsh than the metal I’d been listening to, and my mind just wasn’t ready for it.

Obviously, that changed. It’s now one of my favorite genres of metal, and although I still have much to learn, I like to think I have a better appreciation for the nuances of even the most raw and bestial black metal assaults, as well as a better ability than I once had to separate what’s genuinely excellent among newer rampaging releases from music that’s mainly a recycling of decades-old viciousness.

The new EP by Sweden’s venerable Svartsyn — Nightmarish Sleep — is genuinely excellent. It’s the latest blast of creativity from a band whose career spans eight full-length albums and more than two decades of time. But it’s definitely not for everyone — it was made for fans who seek out metal that has been pushed to the outer limits of ferocity.

Nightmarish Sleep was released by Carnal Records on December 19, 2014, and it includes four tracks (in addition to the wonderful cover art of Chadwick St. John (Inkshadows). It’s exactly the kind of music that would have repelled me 9 years ago — a violent tornado of sound, with a raw production quality and with hate oozing from every note and drum strike.

It sounds as if it was recorded in the midst of a hurricane or a nuclear firestorm, or both at the same time. Your ears will be almost ceaselessly bombarded by a torrent of thoroughly distorted, pestilential riffs, maniacally fast drum blasts, and a distant cacophony of bestial growls, howls, and shrieks that sounds like a convocation of utterly crazed demons. It’s like the concept of total war translated through the medium of black metal.

Underneath the cataclysm there’s a deep thrumming sound, as if the earth is shaking, and through the maelstrom of warlike noise, unhinged guitar melodies writhe like vipers caught in flames, pulsate like a vein that has been freshly opened, or squall like some leviathan in the final throes of agony. Every now and then, the drum rhythms transform into a staggering march and the riffs take on a doom-drenched air, but for the most part the music flies in a jet-fueled fury.

Yet despite the psychotic savagery of the music, I found it magnetically attractive and thoroughly electrifying. Highly recommended for people who just want to be carried away by a whirlwind — and torn limb from limb in the process.