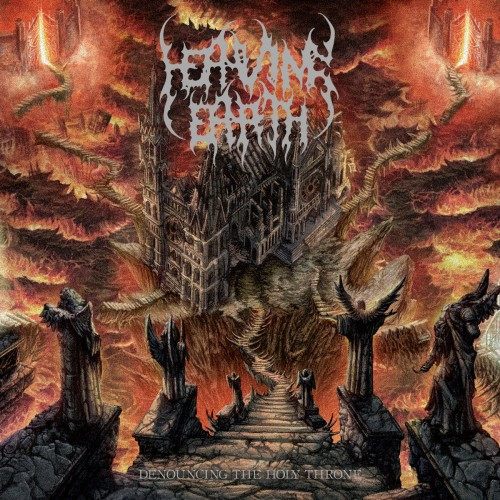 (Austin Weber introduces our premiere of a new song by the Czech metal band Heaving Earth.)

The Czech Republic has been churning out plenty of killer metal bands for a long time now. One can only speculate as to why, but that’s not really pertinent, so let’s move along. I thought that I had explored every nook and cranny of their metal scene, and yet alas, I somehow entirely missed out on Heaving Earth. It only took one early-released song sent to my inbox from a PR firm,“Doomed Before Inception”, to hook me in and become eager for their soon-to-be-released record, Denouncing The Holy Throne.

While their band name comes from the Morbid Angel song of the same name, and the band is indeed certainly steeped in early death metal influences, they come across with a sound all their own. Boatloads of killer serrated riffs are an integral part of the Heaving Earth experience, yet it’s their subtly erratic nature, off-kilter hairpin turns, and mountain-sized heaviness that keeps me coming back. That, and the way they come across as very dark and foreboding, very much in the mood and feeling that some of the most fucked-up and disturbing black metal channel so well.

With all that being said, their latest track which we are premiering today, “Jesus Died”, is a grim and lumbering jaunt that trudges along yet never ceases to be anything but compelling despite the fact that the band aren’t relying on speed to make their point and put their hooks in you.

I’m rarely impressed by death metal bands who choose to explore slower material within frenzied, speed-addled albums, yet “Jesus Died” is certainly a worthy exception to the rule. Its twisted, dark riffing is impeccable, with the crushing machine-gun double-bass work perfectly complementing the riffs, while cavernous inhuman growls blanket the mass in a loathing that’s quite chilling. Additionally, the two phenomenal guitar solos tucked within the song are simply gorgeous. They act as a rotting layer of icing on a cake that’s anything but sweet, yet somehow retains a certain delicious flavor.

Denouncing the Holy Throne will be released by Lavadome Productions on February 6. You can stream two other previously released tracks from the album here and here.

*For anyone who would like to hear how Heaving Earth sounds during their fast songs, here is the one that hooked me: