On March 24, Season of Mist will release a new TMDC EP entitled Bloodcults, and a few paragraphs from now you’ll be able to hear one of the songs on the EP, a hellish track named “Reign of Hell”. 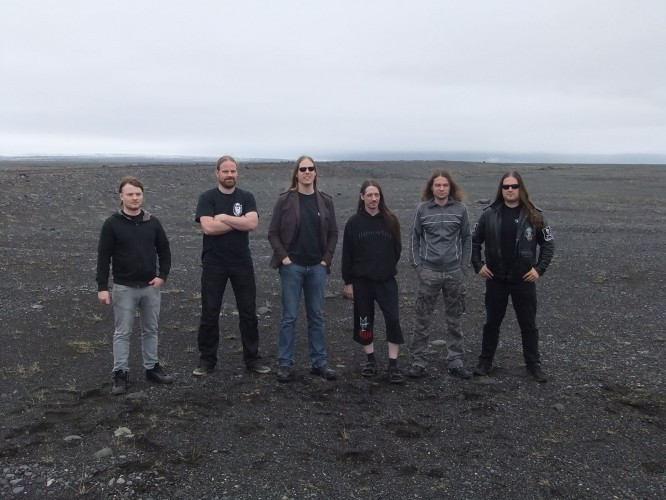 There was a forest here before these dudes arrived.

Whether or not you are as much of a TMDC fan as we are, we highly recommend this mad interview of Robin Kok and Michiel Dekker, which took place backstage after the band’s performance at the 2014 Rock Hard festival in Italy last month. It includes the band’s first public discussion of what’s on this EP and how it came to be recorded.

If what they said is to be believed (and with these guys, you can never be sure), the EP includes re-recorded versions of songs from the band’s debut album, The Apotheosis (2003), but there’s clearly more involved than simply laying down the exact same music with different engineering and the addition of keyboards. For example, there is no song on that album named “Reign of Hell”.

Putting the provenance of this track to one side and focusing solely on the music, it’s decimating — a blasting, hammering, flesh-stripping maelstrom of death metal explosiveness, leavened with interludes of gargantuan doom processionals, flamethrowing guitar solos, historically relevant vocal samples, and of course air raid sirens. Winding through the militaristic assault is a serpentine melody that is as grim as it is exotic.

In other TMDC news, we have learned that guitarist Ivo Hilgenkamp and drummer Sjoerd Visch will be leaving TMDC for greener pastures and that keyboard and noise man Carsten Altena will be moving to guitar, while the band will rely on session drummers going forward.

To repeat, Bloodcults will be released March 24 by Season of Mist and will be available for pre-order at these locations:

9 Responses to “AN NCS PREMIERE: THE MONOLITH DEATHCULT — “REIGN OF HELL””