(Austin Weber reviews the debut album by Seattle’s Theories, which will soon be released by Metal Blade Records.)

Of all metal, grind is often the style where one can really do no wrong as long as things are fast, ear-shatteringly loud, and brief in run-time. But naturally, those rare grind bands who write more interesting songs or who choose to reach outside their genre stylings and bring in other dimensions to their music are going to be the most interesting — which is exactly what Seattle-based Theories accomplish so brilliantly on their new full-length album, Regression. I love all grind, but what Theories have done so well on Regression is to produce a record that has a lot more intensity and replay value than most of their peers.

There isn’t a single song under two minutes on Regression, which is certainly a rarity for a grind band. Theories have a more intricate and densely composed sound than the average quick blasts of fury that populate their genre. Theories could be called deathgrind, but I would say their sound is along lines that are similar to Misery Index. 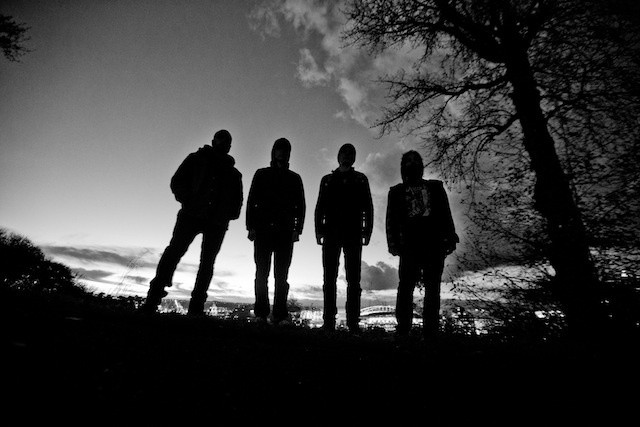 Sure, a fair bit of old-school crust-punk influence is still evident in places, but the real distinguishing centerpiece of their sound is their plentiful and well-thought-out guitar leads and their excellent songwriting. As a result, Regression has more to offer than mere limb-shattering beatings, and the music’s excellent grooves and thrashy riffing add even more variety and texture to their sound as well. Tracks such as “Swimming In Mud” show Theories at their most mid-paced, yet it’s no less annihilating — its a deathly hammering affair that does a sickening job of infecting your brain even without being a typically fast grind barrage.

I’m also a big fan of the vocals employed on Regression. It’s sort of like a grittier, less nasally Jacob Bannon sort of fiery yell, with a hell of a lot of venom fueling the piercing screams that narrate the album. As mentioned earlier, Theories sport a much more varied and well-written style of riffing and a more abundant and effective use of leads than your average grind, and it’s a big factor in what sets them apart.

As for the percussion, we all know grind drumming is going to be fast, but the kind of versatile and monstrous drum performance on Regression definitely isn’t something you hear every day.

Even with their first full-length release, Theories are already at a level few grind bands reach, which makes it scary to think what new kind of bestial insanity they may reach with further evolution. Regression is not only a superbly performed assault on your senses, but more importantly, one with more substance and memorable moments than you will find on most records within the genre. Highly recommended.

Regression will be released on March 24 by Metal Blade and can be ordered here:

You can also stream the entire album exclusively at Invisible Oranges via this link (where you can also find a second review by our brother BadWolf):

And to keep track of Theories on Facebook, go here: