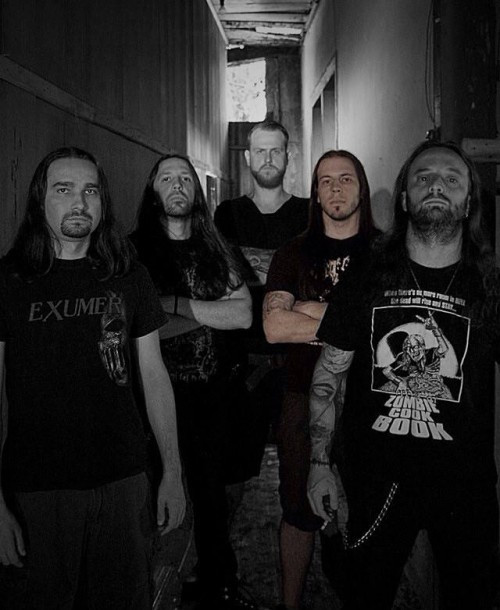 (Our Kansas-based friend Derek Neibarger is not only the man behind the Godless Angel death metal project and the inventor of the Cat Hand Rest©, he also proved himself to be an energetic and successful interviewer during his recent day-long takeover of Metal Sucks [all the interviews are linked here]. In fact, he was so energetic in lining up interviews that a few responses arrived too late to be posted at MS — and so we get to be the lucky host of this interview of Fabricio Bertolozi of Dying Breed.)

When it comes to death metal there are certain geographic modifiers that immediately demand my full attention. Florida, Swedish, and Brazilian are geo tags that speak volumes to the death metal aficionado. Even before hearing a single note, these modifiers can provide a fairly accurate idea of how the band in question will sound, from the guitar tone and percussion to the lyrics and vocal style.

And so I was very excited when I came across a mention of the debut album from Brazilian death metallers DyingBreed in my Facebook newsfeed. The South American region has provided a great deal of killer music to my collection, and DyingBreed most definitely lived up to my expectations. Their music is raw and intense, overflowing with vicious riffs and ferocious roars.

I had the great fortune of being granted an interview with bassist Fabricio Bertolozi, who was more than happy to talk about the band’s formation, the new album, and what the future holds in store for DyingBreed.

Derek: Hi Fabricio! Thank you very much for granting me an interview! Can you tell me a little about how DyingBreed was formed? How did your partnership with OnEye Records come about?

Fabricio: Hey man! Well, the idea to form the band came from the guitarist Felipe, around the year of 2012. The reasons are no other but to play death metal in the old ways, putting some of the personal influences of each member in the sound. All actual members are long-dated friends and have played together in previous bands.

About the partnership, we have worked years before with Gil, the owner of the OnEye Records, in the release of our demo called Killing the Image of Your God, but he had other record seals in the epoch. In 2014, he sent us an email, telling us that he was starting a new seal, and had interest in supporting us in the release of the Worship No One album, making it the first record of the seal. 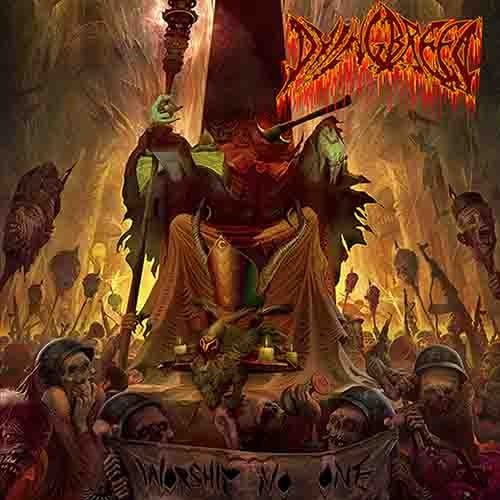 Derek: Worship No One” was released on March 19th. Where and when was the album recorded? Did you carry over any material from your 2013 demo, Killing the Image of Your God?

Fabricio: Sebastian Carsin, a well-known producer for many metal bands here and a true death metal fan, recorded the album in Hurricane Studios, in Porto Alegre/Brazil. He produced our demo Killing the Image of Your God too, so we have a great partnership with him, and he knows exactly how death metal must sound, in its more organic form.

The songs of Worship No One are as old as the previous songs that were recorded in the demo. We have many other songs, you know, but in the time, we think that the actual set list of the full-length worked pretty well, as it goes from more melodic riffs to pure grindcore madness!

Derek: I looked up “Battalion of Hell” after coming across a mention of DyingBreed on my Facebook newsfeed and was immediately hooked; it has all the elements of first rate Brazilian death metal! How has the response been to the new album?

Fabricio: Thank you man! The response has been better than we expected so far. Nowadays, even in the metal scene, people do not buy physical albums in the same intensity as the past. But yes, many metalheads of our country and even of other continents sent us a nice response about the single “Battalion of Hell” and wished to buy our stuff.

I mean, our work has crossed long ways to you who live in another country. For a new band like us, in its first full-length, it is awesome for sure!

It is very satisfying for us to see that all our devotion and passion for death metal still burns in other people’s hearts.

Derek: I think the death metal output from Brazil is just as impressive as that of Sweden, but it has a sound all its own. What do you think it is about the culture there that produces such intense, aggressive, and awesome death metal?

Fabricio: We are very glad to hear this comparison with the great Swedish death metal. Thank you bro! Personally, I think the Brazilian death metal sound is all about our reality. We live (as in so many countries) in a tragic scenario of total disorder, corruption, and hatred, with many social problems, and I think all this stuff that surrounds our lives, in one form or another absorbs us together in this chaos. Everyone has a way to deal with all this shit, and we prefer to expose this negativity in the form of music.

Derek: What are some of the musical influences behind DyingBreed? Is songwriting a band effort or do you have a primary songwriter or songwriters?

Fabricio: I can tell you that the classic bands, like Napalm Death, Cannibal Corpse, Deicide, Morbid Angel, have a great influence for us all. Each one of the band has their personal musical taste and influences, reaching grindcore, traditional heavy metal, and so on.

Many of the song structures have been made by Ariel and Felipe (guitarists), but all the band work together with arrangements or new ideas to bring into the songs. The lyrics are all made by Leonardo (vocals), and later, we see if it fits in the music.

Derek: Will DyingBreed be touring in support of Worship No One? Any chance you’ll be coming over to North America?

Fabricio: We would fucking enjoy to play in other countries, like North America, no doubt about it! Other countries and festivals: call us! (laughs).

We plan to make some gigs in support of Worship No One in the next months, visiting new states of Brazil that we haven’t travelled to yet.

The most difficult point is to conciliate the gigs with our “normal life” jobs and studies. Many bands have the same reality, by the way, and unfortunately it doesn’t allow us to make an extensive tour around the globe, you know. However, slowly, we will get there and spread our metal of death!

Derek: If you could choose any band in the world to tour with, who would it be?

Fabricio: The most difficult question from the interview (laughs). Recently we played two gigs opening for Entombed A.D., and it was a personal realization for me. Those guys are icons from the Swedish death metal, and they are very nice people, with a great sense of humility. Our respect and admiration for them has increased more than 666%!

About the band… I think a tour with Bloodbath would be the best one. You know, they are death metal fans who play death metal, and this is the true spirit that all the bands must share. Play what you really like.

Fabricio: My first guitar was a gift when I was about 18 and it was a Golden Les Paul. That thing had some defect in the wood of the body and in the scales. It sounded always like shit, but I did not care (and I did not know this until buying one decent guitar)! (laughs).

The first metal album I’ve owned… I think it was the Black Album from Metallica. My dad gave it to me when I was 8. But the first album that I bought with my own economies was Horror Show from Iced Earth. I saw the album art in the store and I liked it a lot, so I bought it without listening before. This was very special to me.

The last question, it’s funny, but the first metal gig that I went to was a fest in my city, when I was 15 I think. One of the bands that I watched was Hateworks, the former band of Leonardo, who is the vocalist from DyingBreed. It’s nice for me to play with guys from previous local bands that I always liked and respected.

Derek: Thank you so much for taking the time to answer my questions! I look forward to hearing much more from DyingBreed in the years to come!

Fabricio: I must thank you a lot Derek. Thanks for the space and for your interest in our work with DyingBreed. If you want to know more about us, check us on Facebook:

Long-life to No Clean Singing!

Check Out “Battalion of Hell” from “Worship No One”