Somehow it’s been almost six whole years since the last proper album by Black Metal stalwarts Gorgoroth. And what a long six years they’ve been, filled with a multitude of ups and downs, highs and lows, one particularly ill-conceived re-recording, and a rather public spat with their (now ex) vocalist Pest.

So you can probably be forgiven for being a little wary about the group’s new album, their ninth (or tenth, depending on how you’re counting), and only their second with Tomas Asklund behind the kit, as well as their first with yet another new vocalist (Triumfall’s Atterigner) behind the mic.

But you needn’t be unduly concerned. Although Instinctus Bestialis may not be the masterpiece necessary to truly thrust the band back to the forefront of today’s Black Metal scene, when it all comes together it is in fact very, very, good indeed. 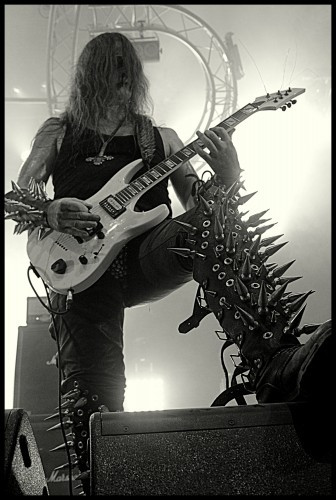 At just over half an hour in total length it’s undeniably a rapid-fire listen – as has been the case with all the band’s albums – yet you never feel short-changed or underwhelmed by this. In fact, the album’s short run-time, coupled with its fairly palpable sense of blasphemous energy, makes it hard to resist just pushing “play” again immediately after it finishes!

As it stands, a lot of the material on offer here hearkens back to the Incipit Satan/Ad Majorem… period, with the initial salvo of “Radix Malorum” (one of the strongest openers the band have ever produced, which explodes out of the gates in a veritable fever-frenzy of scalding riffs and demonic hooks) and “Dionysian Rite” (all teeth-grinding, chugging guitars, eerie, flickering harmonics, and a hefty helping of impending doom) immediately setting the stage for a return to the band’s “glory days”.

The strychnine melodies of “Ad Omnipotens Aeterne Diabolus” glide like razorblades across your skin, bolstered by Asklund’s punishingly precise drum-work, and accentuated by a series of grimly infectious vocal hooks courtesy of new boy Atterigner, who more than holds his own here on his debut with the band, his gritty snarl landing somewhere between previous Gorgoroth frontman Gaahl and that of Belphegor vocalist Helmuth.

“Come Night”, despite a tendency to whip by almost a little too quickly (at least first time around), still possesses a rich vein of cadaverous, vampiric melodies that worm their way under your skin a little more with every listen, although it’s the heaving hooks and morbid stomp-along of “Burn in His Light” which leaves a much stronger instant impression, showcasing Infernus’ mastery of the gloriously simple, yet effortlessly effective, “Black Metal riff”, each one inducing an irresistible bout of headbanging bliss, aided and abetted by Asklund’s nimble stick-work and impressive grasp of drumming dynamics.

The deceptively titled “Rage” is in fact a surprisingly sombre affair, a steady deluge of rippling crimson chords and constricted, chugging riffs, leading to a shamelessly bleak and melodic outro, whilst the slightly more Death-tinged “Kala Brahman” showcases the album at its heaviest and most unforgiving, erring a little more toward the Belphegor side of things in its inexorable march of brute-force riffage and pounding snare patterns.

The album ends with the poisoned dirge of “Awakening”, a two-minute ground-and-pound of rattling, relentless percussion and low, ghoulish grooves, offset by a cruelly infectious vocal refrain, bringing the whole album to a suitably bone-grinding and blasphemous conclusion. 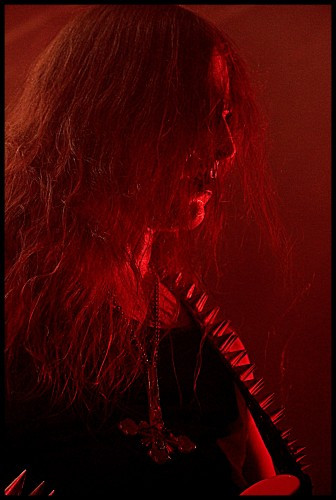 After listening to this album several times over it seems to me that the negative reception afforded to the re-recording of Under the Sign of Hell back in 2011 (particularly with regards to the production and drum work, both of which are massively improved here), coupled with the twin pressures of breaking in a new vocalist and re-establishing the band’s slightly tarnished reputation, must have inspired Infernus and his devilish cohorts to put forth an extra effort this time around. Although Instinctus Bestialis may on one level represent yet another comeback for a group who’ve often struggled for stability and consistency for large portions of their career, it’s also another undeniably impressive entry in the band’s unholy legacy.

Instinctus Bestialis will be released by Soulseller Records on June 8 and can be pre-ordered here. It was recorded and mixed by Tomas Asklund in Monolith Studio, produced by Infernus and Asklund, and mastered at Cutting Room / Sweden by M. Lindfors, Infernus, and Asklund. It includes guest appearances on lead guitar by Chris Cannella, Fabio Sperandio, and Henrik Ekeroth.