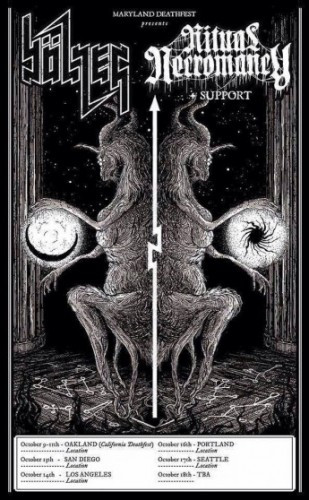 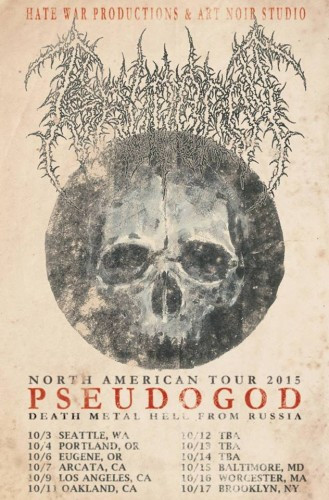 I haven’t seen an official announcement about this tour by the Swiss band Bölzer and Ritual Necromancy from PDX. All I’ve seen (thanks to a tip by Facebook friend JCB) is the flyer up above, which appeared on Facebook yesterday.

It seems to be sponsored by Maryland Deathfest, and basically consists of the appearance of these two bands at the inaugural edition of California Deathfest in Oakland on October 9-11, 2015, followed by a West Coast run that takes in San Diego, L.A., Portland, and Seattle, with one more date to be announced. Vancouver would be the next logical location, but there’s a finicky border-crossing-visa thing that would have to be worked out if that were the target.

All the locations haven’t been disclosed yet. Some Google searching shows that the San Diego date will be at The Merrow and will include local support from Ghoulgotha, Our Place of Worship Is Silence, and Seraphic Disgust. I’ve heard some intelligence about where the Seattle show will take place, but I’ll keep quiet until the announcement is official.

For those of you who won’t be able to catch this tour, I would like to say that I feel your pain but that wouldn’t be true.

Russia’s Pseudogod have also built a tour around their October 11 appearance at California Deathfest. Here’s the current routing, though it’s possible more dates will be added:

I’ve again heard some intelligence about where the Seattle show will take place, but there hasn’t been an official announcement yet. I did see that the Chicago show will be at Cobra Lounge and will also include appearances by Black Witchery and Hellfire Deathcult.

I’ve also heard that Pseudogod have been recording new material. In the meantime, enjoy The Pharynxes of Hell, released last fall.