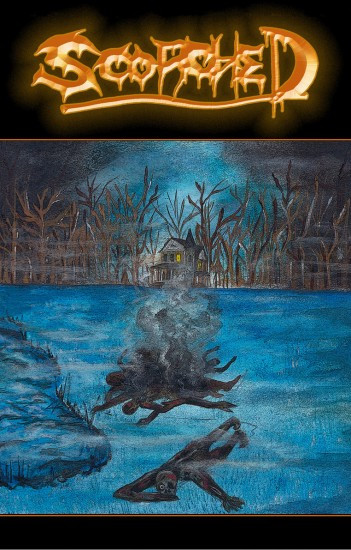 Next Monday Unspeakable Axe Records will begin shipping the debut self-titled demo of Delaware death metal band Scorched, and in advance of the release we’re bringing you a music stream of the entire album — which is available for digital download as of today.

Scorched consists of four full-length songs along with a brief intro track and two atmospheric interludes. On those four songs, the band more than live up to their name, delivering a scorching conflagration of feral death metal with style. The music has an old-school tone and viciousness and mixes full-throttle rampaging (with elements of crust/punk in the mix) with slower, staggering, doom-saturated lurches. There’s a skull-crushing rhythm section at work, along with riffs that thrash, chug, and eviscerate with equal potency.

The band switch up the pace within the songs and also poison them with some slithery lead guitar melodies that may get stuck in your head. And the vocals are deep, echoing, and convincingly monstrous — except when they’re high, shrieking, and plausibly unhinged.

This is a hell of a death metal debut that doesn’t sound like a debut at all, but instead the work of reanimated ghouls who had plenty of experience before being buried and clawing their way out of the grave for more unholy life. With a debut this good, we devoutly hope for more in the future!

You can pre-order Scorched on limited-edition cassette tape from Unspeakable Axe at this location or via the Bandcamp link below, where you can also download the album digitally right now. The cover art is by Rachel Truskolawski.

3 Responses to “AN NCS PREMIERE: “SCORCHED” BY SCORCHED”