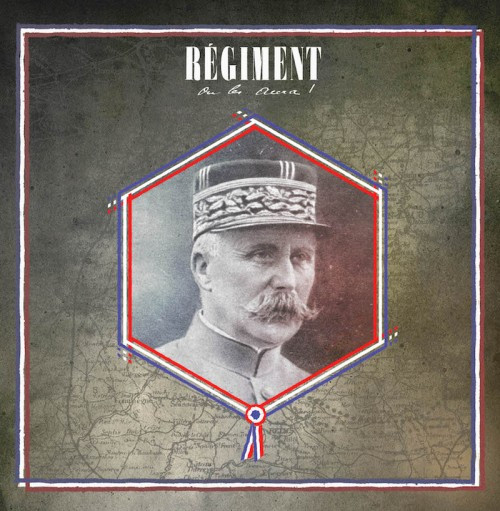 The French band Régiment have recorded a debut album entitled On les Aura! that will be released by Antiq Records, and today we bring you the premiere of one of the album’s new songs, “Mort d’un Nègre“.

Although Régiment are a new band, the four members have performed in an array of other groups —Wormfood, Mind Asylum, Öxxö Xööx, Lugnasad, Anus Mundi, Vintergeist, Borgia, Aorlhac, Peste Noire, Hanternoz, Ê, and Grylle. The new album is a concept record, and it’s important to understand that concept as well as the meaning of the song we’re premiering, lest you get the wrong idea from the title.

The album (whose title in English means “We’ll Get Them!”) is a musical exploration of life and death on the French lines during World War I. As the band’s frontman H has explained, it was inspired by the thoughts and feelings of the songwriters in seeing such family artifacts as a helmet, letters, military gear, and photographs dating back to the so-called “War To End All Wars”, which devastated an entire generation of men in Europe and had vast ripple effects on future generations as well. It’s not a typical subject for an extreme metal album, but there’s no doubt it’s an interesting one.

The song we’re premiering today tells the story of a black Sénégalese soldier in the French army who is mortally wounded in battle and yet feels sympathy for a dying German soldier who lies next to him, as if to say, “we are not so different after all”. It is the only sign of forgiveness or mercy that appears in the album’s lyrics, which otherwise attempt to capture the hatred and ferocity that consumed the combatants and their nations.

Although the song’s title and its lyrics use the vernacular of that long-past era of 1914-1918 (as do all of the songs), it was intended by the band as a paying of respects to the black soldiers who fought and died for France in “The Great War”, though they were treated then as little more than savages.

Musically, the song is a blending of black metal and death metal elements, with a sombre but memorable melody at the beginning that bespeaks loss and sorrow in a powerful way. But the song soon enough erupts in a thrashing gallop, with riveting, racing riffs and thundering, acrobatic percussion, and lyrics voiced in a deep growl. Even as the song blasts ahead in a warlike frenzy, it’s laced with a very catchy melody that to these ears has a hint of folk metal influence. It’s easy to be carried away by the energy and passion in the music, and it makes for a riveting introduction to the new album.

On les Aura! was mixed and mastered by Gnarl from Verdunkeln, who previously worked on recordings by The Ruins of Beverast and Truppensturm. It will be released by Antiq Records on June 18, 2015, along with a 12-page booklet that includes hand-made illustrations and the lyrics for all the songs. For more information and to order, go here: