The 2014 debut album of Howls of Ebb — Vigils of the 3rd Eye — was a strikingly distinctive collection of songs, reflecting a musical vision of otherworldly darkness and derangement. The band have now completed a successor, a mini-album named The Marrow Veil that will also be released by the I, Voidhanger label, and today we bring you an edited version of a song named “Iron Laurels, Woven In Rust“.

The complete version of the song is more than 12 minutes in length. The MLP’s opening track, “Standing On Bedlam, Burning In Bliss”, is almost 20 minutes long. Between them sits the only short track on this three-song offering, “Dusks Tyrannical Lore”, at 2:29. The significant length of the two longer songs isn’t the only difference between The Marrow Veil and Vigils of the 3rd Eye — this isn’t Vigils 2.0. 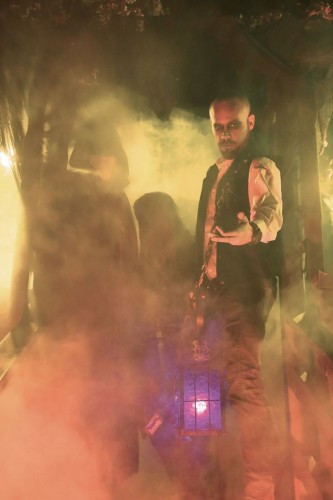 It’s worth considering the explanation of the band’s lead singer and guitarist, ZLH (Patrick Brown, ex-Nepenthe, ex-Trillion Red), from a recent extensive interview that’s must-reading for people interested in this band:

“I would personally say The Marrow Veil MLP is more an oblique move from Vigils Of The 3rd Eye, rather than a lateral or parallel one. Is it better? No. Is it a step down? We don’t think so. It is different in execution though. We call it a methodical and destructive meditation, while Vigils Of The 3rd Eye is an elusive insanity. You simply have to hear the new MLP to understand what that means.”

Unfortunately, we’re not able to let you hear all of The Marrow Veil (we haven’t heard all of it ourselves), but perhaps some insights can be gleaned even from the edited version of “Iron Laurels…” The jagged, gasping horrors of the vocal expressions and the strange dissonance of the riffs vividly conjure visions of supernatural chaos, even further enhanced by eerie swooping tones that cycle through the pounding thunder of the rhythms and the unhinged (and electrifying) guitar solo that erupts near the end of this excerpt.

But this part of the song is also a thoroughly galvanizing romp that will get your head and your feet moving. The attention-grabbing drum progressions and metronomic snare beats, the persistent thrum of the bass, and the jabbing punch of the rhythm guitar are, in a word, irresistible.

The Marrow Veil shows every sign of being just as original and fascinating as the album it follows. The MLP is projected for a late July release on 12″ vinyl. It features striking cover art by Wiley Trieff. The track list is as follows:

An excerpt from “Standing on Bedlam, Burning On Bliss” premiered at Invisible Oranges last month, and we’re including that one below our own premiere, in case you missed it.

4 Responses to “AN NCS PREMIERE: HOWLS OF EBB — “IRON LAURELS, WOVEN IN RUST””