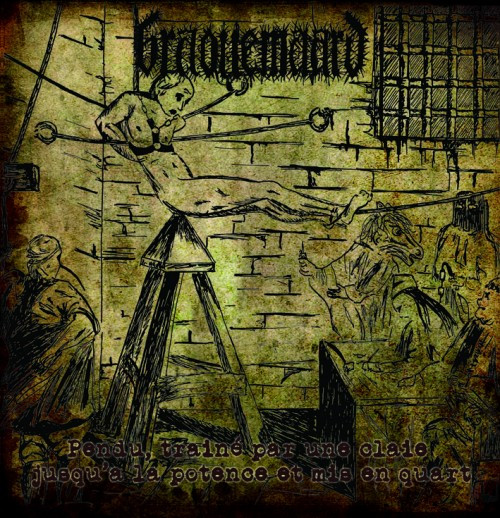 The French band Braquemaard have completed work on their debut album, Pendu, traîné par une claie jusqu’à la potence, et mis en quart (“hang, drawn, and quartered”) and it will be released on CD by Antiq Records later this year. To introduce the band to you, and to give you an example of what the album will be bringing our way, we give you the premiere of a song named “Fondements“.

I have a feeling that a certain segment of our readers are going to eat this up, and that another percentage (probably larger) will run from it like forest animals in the path of a conflagration. And “conflagration” isn’t a bad way to describe the music either.

The song title seems to be a nice French word for “butts” or “assholes”. In genre terms, the music is an ugly Frankenstein’s monster constructed of body parts from brutal death metal, grindcore, and black metal — or at least that’s how I would attempt to deconstruct it.

It’s a howling maelstrom of distorted riffs that grind and blast away like weaponry, non-stop speed-freak drumming, cadaverous vocal roaring, and strange lead-guitar eruptions that swoop and squeal. It’s periodically punctuated by jolting riffs that strike like hammer blows, but for the most part it just runs rampant, like some primitive brute.

I get a megawatt jolt of adrenaline listening to the song, and it has left me very curious to hear the rest of the album. You’ll know in about 5 seconds whether this is your kind of thing. You’ve been warned.

(The album as a whole, as reflected by the titles of its 18 tracks, deals with sexual perversions and torture. The band’s name means “sword” or “enormous dick” in French. The album includes the band’s 2008 three-track demo as well as new material. To order it, e-mail antiq.label@gmail.com. The label’s web location is below.)