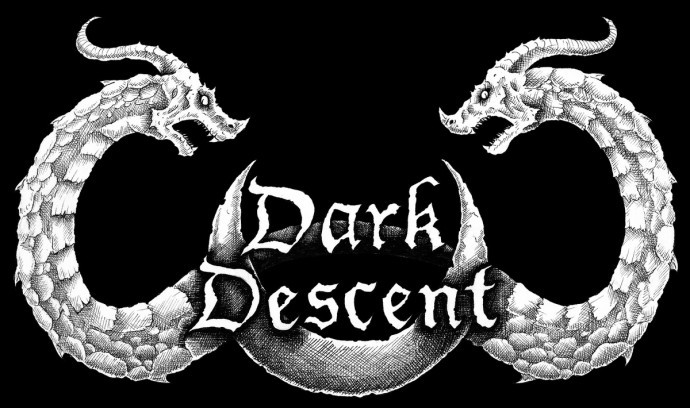 The Dark Descent label has recently released a 10-track sampler of music from the label’s artists that’s available on Bandcamp now (“name your price”). It includes music from recent releases plus previews of unreleased material from Adversarial, Blood Incantation, and Thevetat.

Those three previously unreleased tracks are all great, and for me proved to be welcome introductions to the fascinating, brain-scrambling death metal exuberance of Blood Incantation (their track will appear on an EP named Interdimensional Extinction) and the blood-thirsty death metal explosiveness of Thevetat (their track will appear on a forthcoming 7″ named Desecration of Divine Presence).

I was especially hot to hear the new Adversarial track, “Eonik Spiritual Warfare”, which will appear on their forthcoming second full-length, Death, Endless Nothing and the Black Knife of Nihilism, scheduled for release in August with album artwork that has again been created by the awesome Danille Gauvin.  The band’s set at Maryland Deathfest this year was one of the event’s high points for me, and I’ve been a big fan of everything they’e recorded to date.

The new song is a huge come-on for the new album — decimating, otherworldly, horrifying, memorable, and driven by truly attention-grabbing instrumental performances. Extremely eager for this new album.

I don’t mean to suggest that these three new songs are the only reason to grab this sampler. All the tracks are well worth having, and are good indicators of the quality of each band, and thus signposts to further exploration of their music if you like what you hear.

Among other things, the list includes an excellent new track (“Kogt i Blod”) by Undergang that premiered not long ago and that I raved about on our site (that album is going to be absolutely gruesome in the best possible way). The sampler also proved to be my first introduction to Ellorsith and Sarcasm, and I thought both of their songs were killer (“Through Tears of Gold” is especially amazing).

I’ll mention, lastly, that the songs on the sampler are thoughtfully arranged, so that it’s a cool ride running through it from start to finish. The sampler is available here:

Dark Descent’s FB page is at this location, and the web site is here.

5 Responses to “FREE SHIT FROM DARK DESCENT, WITH NEW SONGS FROM ADVERSARIAL, BLOOD INCANTATION, AND THEVETAT”