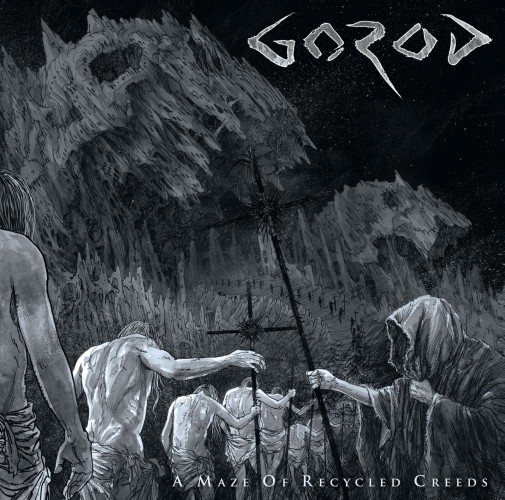 What a welcome piece of news! Not long ago, Listenable Records announced that Gorod’s new album is named A Maze of Recycled Creeds, and they revealed the cover art (which, as you can see, is awesome) — and for people who live in countries where something called “Deezer” is available, they premiered a Gorod song named “Celestial Nature”.

Now, I have a bone to pick with the choice of this “Deezer” place as the location for an exclusive Gorod premiere. The bone I have to pick is that YOU CAN’T FUCKING LISTEN TO IT IN THE UNITED STATES. I’m so annoyed I’m almost tempted not to provide the link. And what kind of focus groups decided that “Deezer” was a good name for… anything? Made me cringe even before I realized that only some other people can use it.

However, I realize that the song will surely surface someplace where the miserable residents of my great land will be able to hear this new Gorod offering and become overjoyed by its undoubted awesomenessness. I also concede that a guitar play-through video of the song was released in January, so it’s not such an enormous loss that some of us can’t now hear the song as it was mixed for the album.

Anyway, I’ll be mature and give you the damned link for the stream:

I found a couple of places in Europe (like this one) that are already listing the album for pre-order. It looks like the release date is October 16, 2015, and that Unique Leader Records will handle the North American release, with Listenable releasing the album in Europe.

And here’s the guitar play-through: