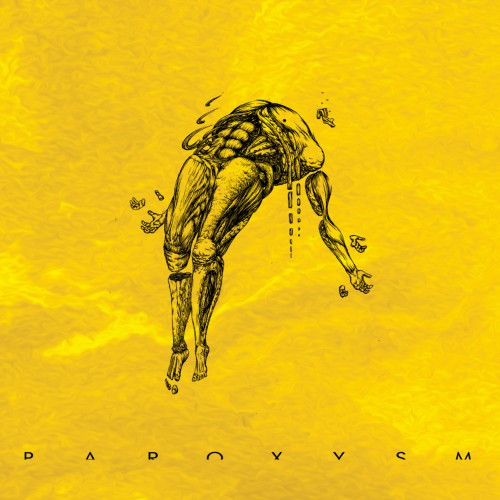 Paroxysm is the name of the new EP by Plague Rider. The Oxford English Dictionary, which seems like the appropriate reference source since Plague Rider hail from the former mother ship, alternately defines “paroxysm” as “a sudden strong feeling or expression of an emotion that cannot be controlled” and “a sudden attack or violent expression of a particular emotion or activity”. With a name like that as an EP title, you don’t expect ambient drone. And as you’re about to find out, the EP lives up to its name.

You will find out, because today we’re premiering a full stream of all four songs on Paroxysm. Like the EP’s name, the song titles are also suggestive — “Retrovirus”, “Occidite”, “Hydrophobe”, and “Prion”, most of them referring to infectious, lethal agents. In a word, all the songs are remarkable (as well as lethal).

“Retrovirus” (which refers to a virus without DNA that replicates in the reverse of the usual way) manages to set up a hard-driving rhythm that grips the back of your neck while the guitars and bass are veering all over the place in a head-spinning display of athletic fretwork and the vocalist is alternately snarling like a wildcat and roaring like a lion. The song includes some mind-bending, white hot guitar solos, too.

“Occidite”, which is Latin for a command to die (and can also mean “plague you to death”) features a serpentine, mesmerizing melody that writhes through a conflagration of jet-fueled instrumental work that is as intricate as it is savage in the force of its assault.

“Hydrophobe” (which refers to substances that are seemingly repelled by water) starts slowly but accelerates into a thrashy, head-whipping torrent of sound that’s unpredictable in its movement. It starts, stops, and turns on a dime, with spidery guitar work, a flashy-as-hell bass performance, more face-melting solos, and drumming that’s just as nimble and just as demented.

And in “Prion”, the EP ends with a song named for a universally lethal infectious agent that isn’t a living organism but instead a “misfolded protein molecule”. By this point in the EP, you may think Plague Rider couldn’t possibly churn out a song any more neuron-twisting and ferocious than they already have — but they do. The vocalist shrieks like a man being turned inside out, while the rest of the band simply go nuts. Eventually the music slows and devolves into a storm of unstructured noise that will set your teeth on edge.

In the convulsive violence of the music, Paroxysm indeed lives up to its name, yet it isn’t uncontrolled. This is technically demanding, experimental death metal that’s remarkably complex yet structured in a way that keeps a firm grip on the listener’s attention, pulling your scrambled brain back into solid grooves just when you think the music is about to explode it into smithereens, and lacing the insane experience with an array of seductive melodies. It’s an EP that should appeal to fans of bands along a continuum that includes the likes of Gorguts and Pyrrhon, and it comes highly recommended.

The EP will be released via Plague Rider’s Bandcamp page in the next week or two.

One Response to “A REVIEW AND A PREMIERE: PLAGUE RIDER’S “PAROXYSM””