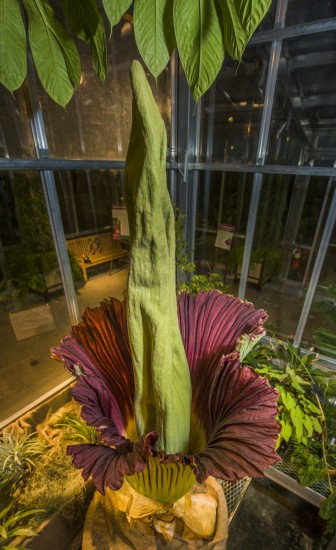 These THAT’S METAL! posts have become so irregular that I’ve taken to counting the weeks that separate them in order to quantify the extent of my shame: The last one was five weeks ago. It isn’t that I’m disinterested, it’s that they really do take me a long time to put together, and I’m usually caught up in the throes of metal music during free time on the weekends and often have trouble pulling myself away from listening and writing about that. But here we are again at last, with a large collection of images and videos that I think are metal even though they’re not music.

I’ve written about the corpse flower before in this series, but it’s worth a return visit today. The scientific name of these enormous plants, which have grown to heights of more than 10 feet, is Amorphophallus titanum. I can’t imagine why that name was chosen, can you?

The corpse flower can take eight to 20 years to initially bloom, and they may not bloom again for another seven to 10 years, so it’s kind of a big deal when it happens — and this month it has happened (and is happening) twice in U.S. botanical gardens.

Apart from the visual spectacle of the blooming process, the other noteworthy aspect of the event is the stench — because when they bloom, they smell like rotting flesh. And the reason for that? According to this article, “their main pollinators are carrion beetles, which usually feed on things like dead animals and are attracted to the stench.”

Thanks to a message from Grant Skelton, I learned that one corpse flower bloomed at the Denver Botanic Gardens earlier this month (which is where the photo at the top of this post was taken), and another is in the process of blooming right now at the Chicago Botanic Garden. In fact, thanks to a tip from my friend Raven S., I learned that there’s a live feed of the event going on now. It’s a very slow process, so in addition to embedding that live feed below, I’m also including time-lapse video of two other corpse flower bloom events, one that happened at Ohio State University in 2012 and another that took place in 2014 at The Huntington in San Marino, California. 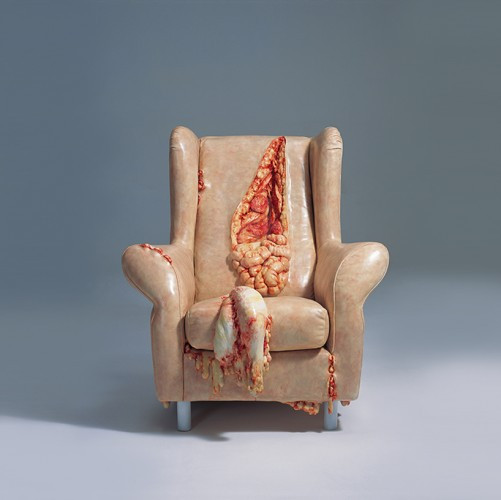 Cao Hui is a Chinese artist whose latest series of creations, crafted in a mixture of resin, fibre, and other media, is entitled “Visual Temperature“. It “depicts everyday objects such as an upholstered armchair, suitcase, jacket and gloves… except hyper-realistically rendered as flesh.”

I shudder to think what’s lurking within the crevices and innards of the sofa in our family room. Thankfully, it’s probably not this disgusting. Probably.

(via Design Bloom, with thanks to Austin Weber for the tip on this one.) 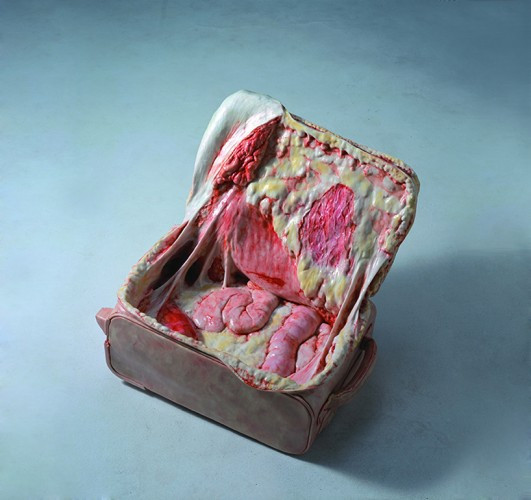 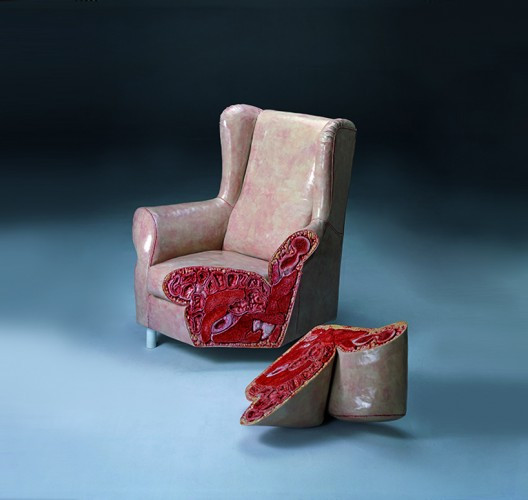 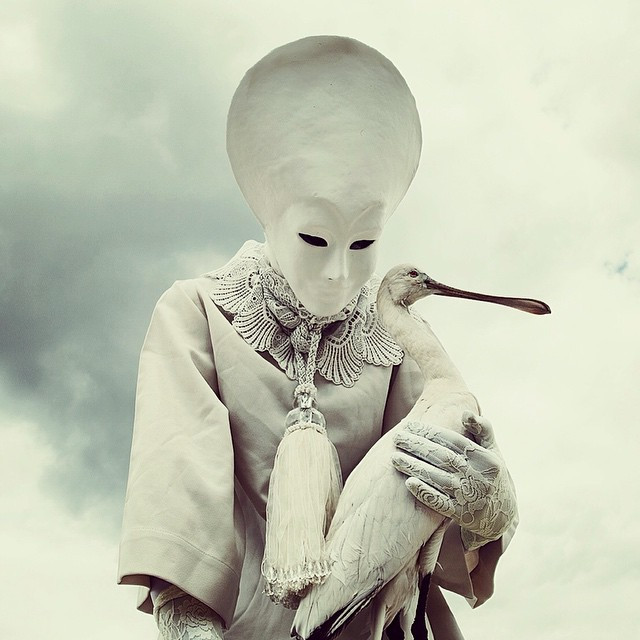 Mothmeister is the name chosen by a German duo of taxidermists who delight in creating photographs in which “grotesquely-masked humanoids cavort with quasi-lifelike animals in barren settings”. The ongoing series of photos is called Wounderland. To quote one of the creators:

“My girlfriend and I are Mothmeister. We create Wounderland – a weird and wonderful universe. We portray anonymous, ugly masked creatures as a reaction against the dominant exhibitionism of the selfie culture and beauty standards marketed by the mass media.

“We are passionate taxidermy collectors. That’s why our lonesome characters are, most of the time, accompanied by mounted animals. We reincarnate these dead critters into fairy tale figures by dressing them up like the Victorian taxidermist Walter Potter did. Our surreal inspiration comes from our own imagination, dreams and nightmares.”

Surely it’s just a matter of time before one of Mothmeister’s creations show up on the cover of a metal album.

More images can be seen below, and here. Mothmeister sell photos of their creations at Etsy.

(Thanks again to Austin Weber for linking me to this.) 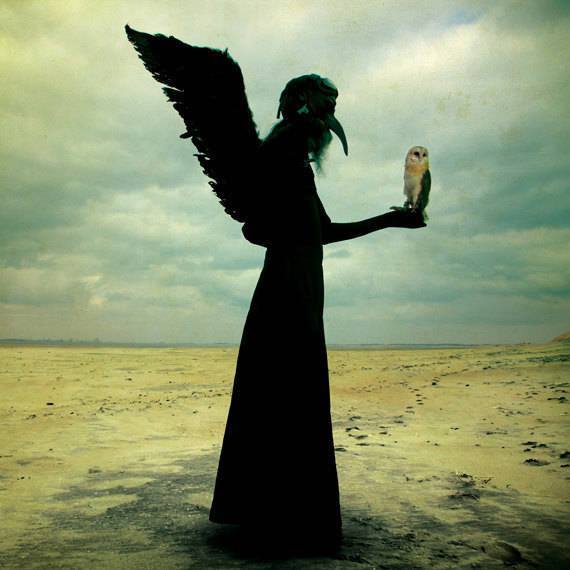 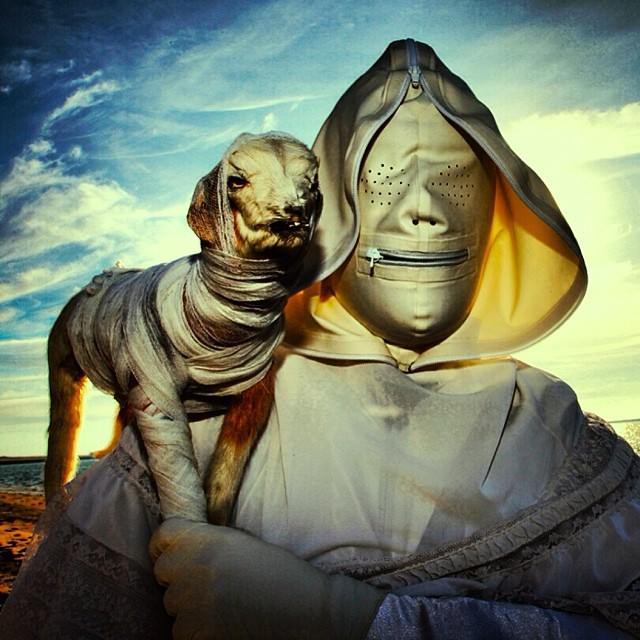 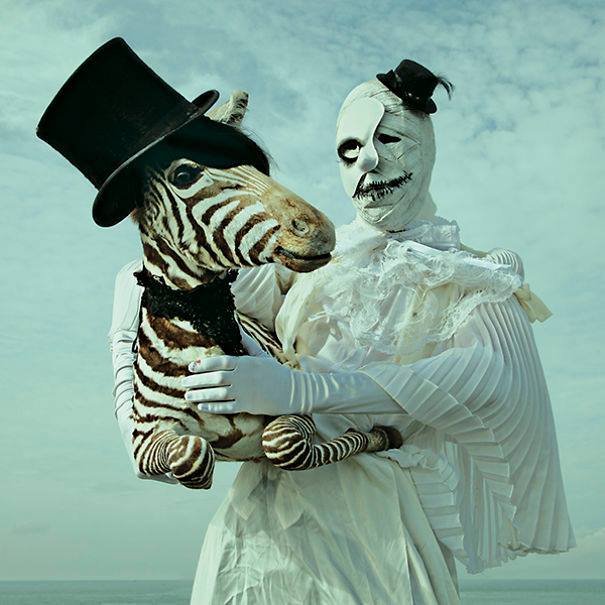 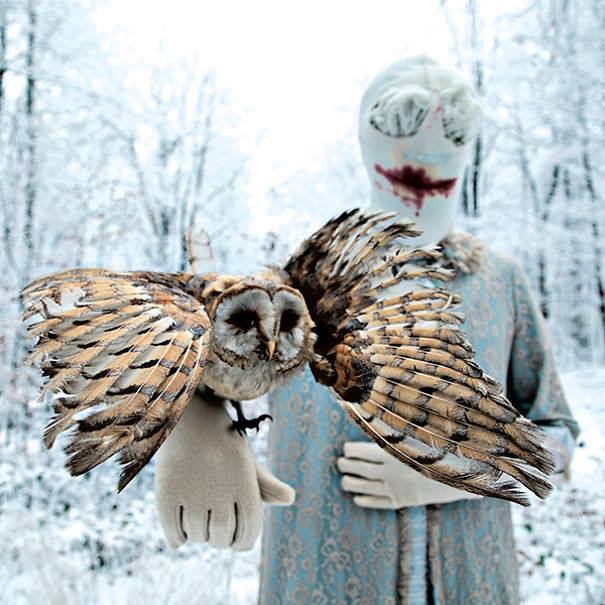 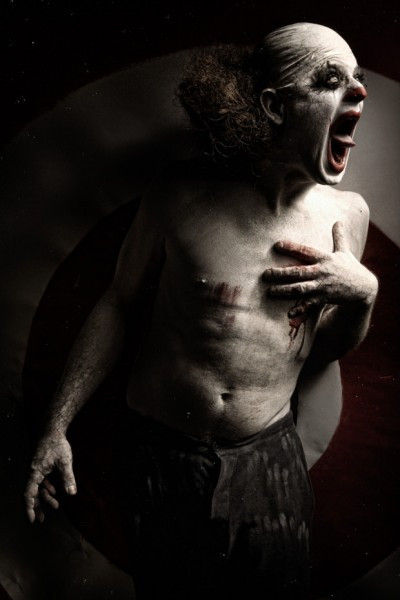 This next series of photos struck me as spiritually related to the Mothmeister imagery featured in the preceding item. There are part of a series called Clownville created by Rome-based photographer Eolo Perfido.

Even more typical clowns strike lots of people as creepy and frightening (perhaps especially little children), but Perfido has pushed the concept into new realms of menace and depravity. This article explains:

“With the help of makeup artist Valeria Orlando, and after researching books on real-life clowns, Perfido undertook the task of outfitting anyone from actors and colleagues to family and friends with false faces, allowing them to inhabit each ghoulish character before shooting them at home or in studio. While each scene was carefully staged, the photographer notes that the most incisive images were conceived in instants of improvisation and spontaneity.”

Additional photos are below. To see more, go here. Eolo Perfido’s web site is at this location.

(Thanks to MaxR for pointing me to these photos.)

P.S. I know I’ve seen the last of the images below somewhere before. In fact I’m pretty sure it’s a band member or something that appears in a metal video, and I’m pretty sure I’ve posted it at NCS at some point in the past. Damned if I can remember though. 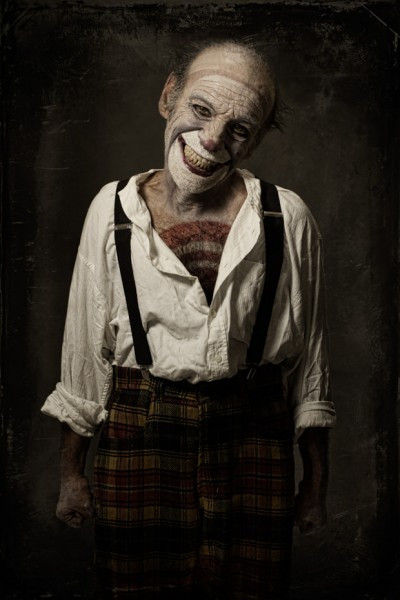 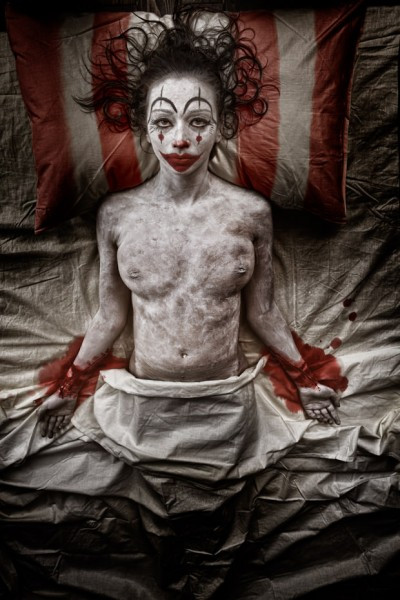 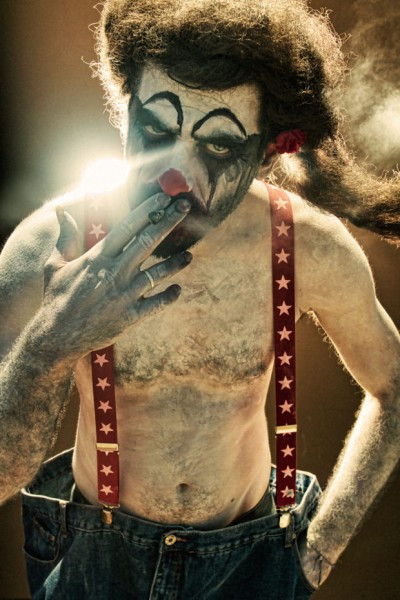 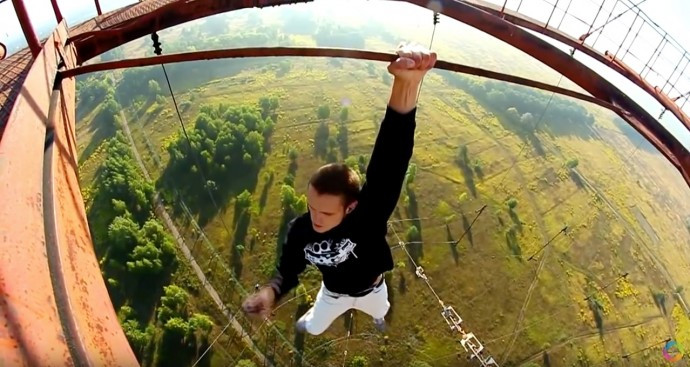 Okay, enough with the stinky flowers and the creepy images. Let’s turn to some good old-fashioned human lunacy.

I’m sure there are now people all over the world filming these kind of Go-Pro-enabled videos that make your stomach turn somersaults when you watch them, but there really do seem to be more coming out of Ukraine and Russia than elsewhere. I’m sure there’s an explanation, I mean other than drilling holes in the heads of male babies there and removing the part of the brain devoted to self-preservation.

By the way, I don’t know how the video ends because I had to turn it off half-way through. 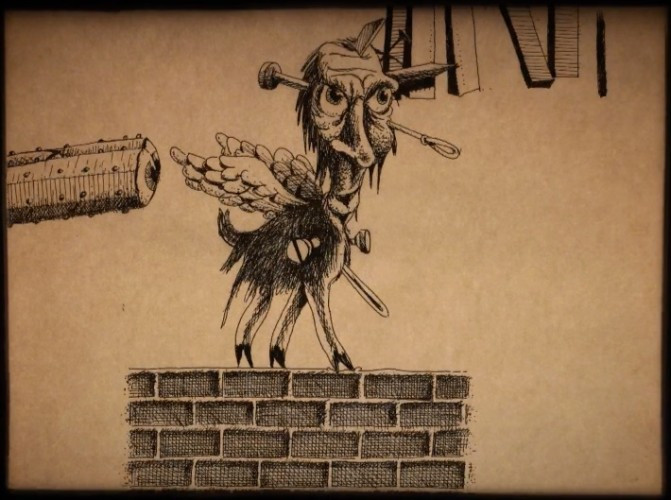 I’m not sure I can explain the attraction of this next video — other than the sheer bizarre exuberance of its creativity. The site where I found it included these introductory comments:

“This is like one of those dreams that you have which you can never quite remember but what you can recall is their whole strange, surreal dislocation from real life.  Here, images conjured up by the animator create a reality of their own.  Creatures exist because they do; things happen because they do – it all makes perverse, inextricable sense. Produced by the Polish Film Board and Fumi Studio, Ex Animo was directed by Wojciech Wojtkowski.”

I suppose another explanation for its strange appeal is that it could be understood as a metaphor for… life. Enjoy Ex Animo:

Ex Animo from FUMI on Vimeo. 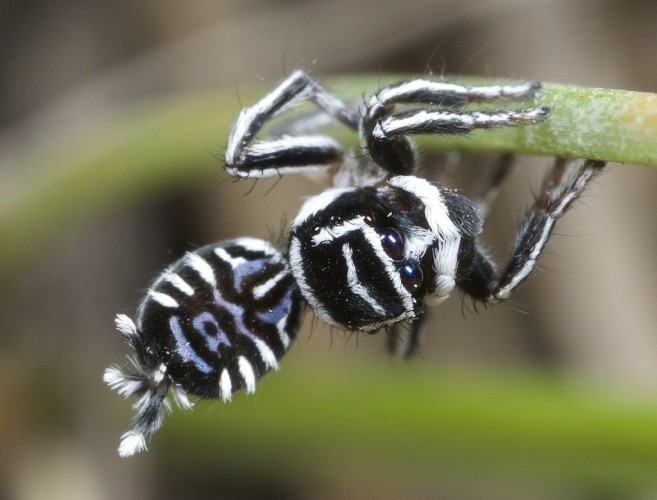 In these That’s Metal! posts I usually try to include some kind of ghastly creature from the natural world (I mean, other than human beings). For yours truly, few things are more ghastly than spiders. I have a bad case of arachnophobia. I wouldn’t call it a crippling fear of spiders, but I really, really don’t like to be in their vicinity. And I really get creeped out by the thought of jumping spiders, because that implies that you don’t have to be near them in order for them to get near you.

But despite my aversion to spiders, I feel compelled to include this species of jumping spider in this post, for what I think will be obvious reasons. Though the woman who actually discovered and photographed the species for the first time in 2013 (Madeline Girard) wanted to name it Skeletor, its scientific name is Maratus sceletus. It was discovered in the Wondul Range National Park in Queensland, Australia.

On the plus side, the male sceletus is often only 4mm in length, not counting the spinnerets (its silk-spinning organs). The spiders are also only found in parts of Australia. So I think I’m safe — and the appearance of this thing really is very cool.

A great deal more information about the spider and its discovery, as well as additional photos, can be found here. 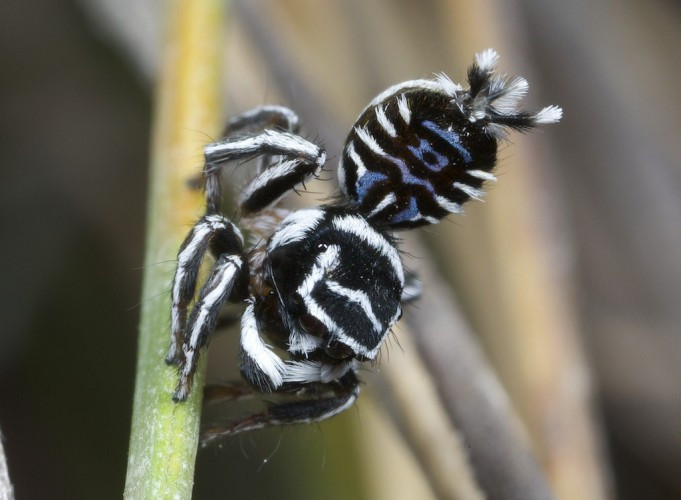 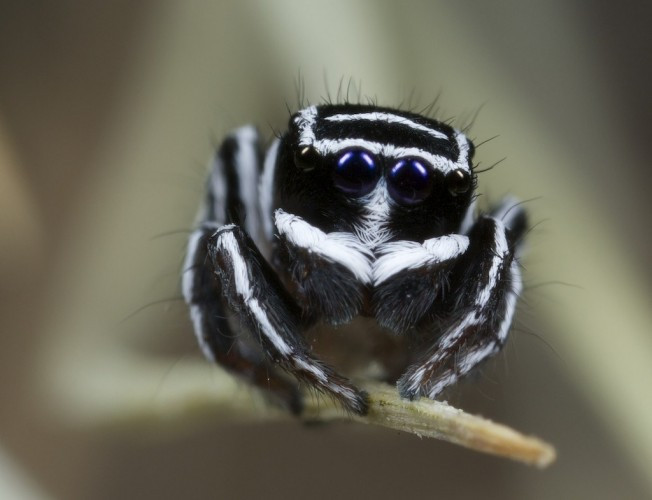 You know, I’m in this far already, I might as well take a deep breath and go a little further. I’m not going to say “thank” you to Austin Weber for sticking a time-lapse video of L. Parahybana (molting over a period of two hours) on my FB timeline, or Raven S. for tacking on a version of the video set to Slayer, because this really does creep me out. So I’ll just give them “credit” for it. 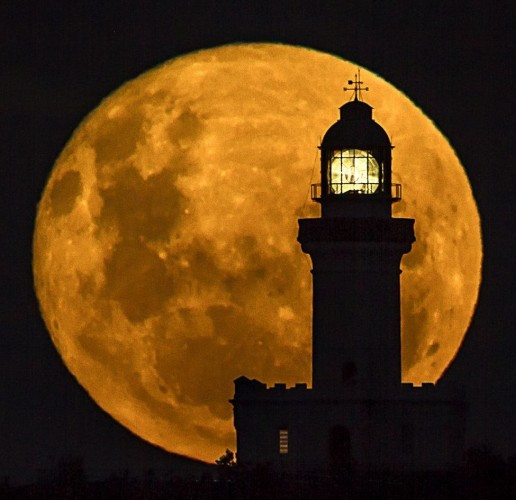 There are two videos in this next and final item. I saw the first of them only this morning. It’s a time lapse film of a “blue moon” rising on July 31, 2015, over Byron Bay, New South Wales, Australia, made by landscape photographer Luke Taylor. The video is made up of 1038 frames and slowed down as close to real time as Luke could make it. As you probably know, “blue moons” are so called not because they are blue in color, but because they are the second full moon to occur in a single calendar month.

After I saw this video, I remembered another moon-related video I had seen many months ago and had squirreled away on my list of potential items for these posts. When I found it again, I realized that the man whose highline walk was featured in the video — Dean Potter — is the extreme sports legend who had died in May 2015 in a base jump at the same U.S. national park where the video was filmed (Cathedral Peak in Yosemite National Park). This video was shot in 2011 from over a mile away. It’s beautiful, and badass, and now even more poignant.

Once in a Blue Moon from Luke Taylor on Vimeo.