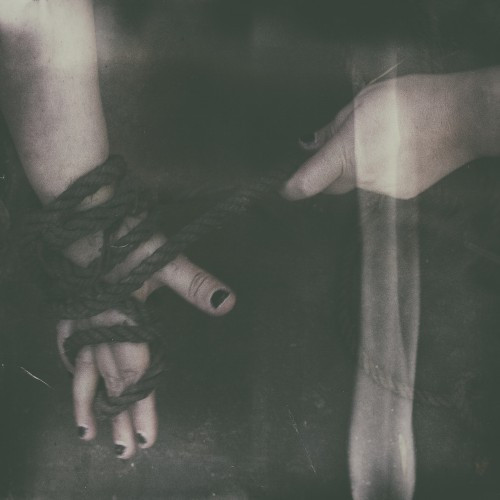 (Austin Weber introduces our premiere of the title track to the new album by the multinational group Coma Cluster Void.)

In a way it’s very fitting that I’m here today writing about the premiere of the first full Coma Cluster Void song. Because it was Islander himself who first tipped me off to this multinational atonal 10-string death metal band in the first place. At the time he alerted me to them over a year ago, the band only had some very short song snippet clips up. But even those were strong enough to make me realize this band was going to be something special. So as I said, being here today to help premiere the title track from their forthcoming debut album Mind Cemeteries definitely feels like things have come full circle.

As for what the song “Mind Cemeteries” offers your ears, it’s a massive rumbling from the abyss right from the start, heaving with a mechanical, uneven gait that easily induces vertigo. There is a suffocating heaviness to “Mind Cemeteries”, which mercilessly strikes and jabs at you in shrill volleys of noise and disturbing dissonance.

Each member’s performance brings a powerful element of cold hatred to the song — from the monstrous bellows and howls of Mike Disalvo (ex-Cryptopsy) and Austin Taylor that creep and crawl across every rhythmic shift, to John Strieder’s elastic and demented riffing, which conjures up an unwell feeling of sickness and disgust, to the cavernous penetrating bass presence of Sylvia Hinz, all tied together by the off-kilter and frenzied drumming of Chris Burrows (Thoren), who fleshes out his groove-tastic anchor of a performance with a litany of spicy fills.

There really isn’t anyone out there who sounds like this. But if you want or need a ballpark as a frame of reference, imagine what it would sound like if Car Bomb and The Tony Danza Tapdance Extravaganza joined sonic forces and adapted their styles into an unconventional death metal framework.

I can’t stress enough how awesome “Mind Cemeteries” is, and how awesome it is to get to share such forward-thinking death metal madness with the world. Expect Mind Cemeteries to drop sometime in the first half of 2016.