Welcome to the 7th Part of our list of the year’s Most Infectious Extreme Metal Songs. To listen to the other songs that have been named to this list so far and to read about the criteria for the list as a whole, go HERE.

So far, our list hasn’t included any thrash, but I’m remedying that deficit today. One song comes from an outstanding album by a group of outstanding and well-known American musicians, and the other comes from a much more obscure but very talented Turkish band.

The first song I’m adding today comes from an album we didn’t manage to review this year. It’s not the first or the last entry of that kind. Try as we might, we often fail to pay proper attention to excellent albums due to lack of time or congenital mental deficiency. And VHÖL’s Deeper Than Sky really is excellent.

The song I’m adding to this list from Deeper Than Sky is the album’s opening track, “The Desolate Damned”. All members of the band are firing on all cylinders in this song, which manages to embody so many elements of classic heavy metal without coming off as contrived or cliched. A lot of the credit for that goes to the demented lead guitar melodies, which are truly inspired. Catchy-as-fuck riffs, too, of course. 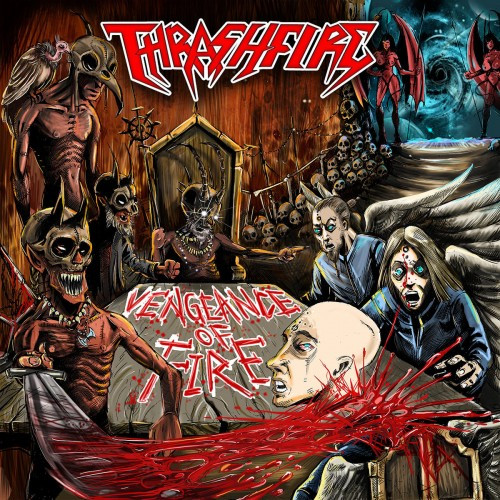 In a way, this next song is an emblem of something larger. The band isn’t nearly as well known as VHÖL, and I suspect that’s due in part to the fact that they’re located in Ankara, Turkey, a place where I would guess it’s more difficult to get noticed in the global community of metal. The song also isn’t a reinvention of any wheels — but it’s a testament to a certain kind of underground spirit that continues to thrive all over the world.

It’s also a hellaciously infectious song, even if it’s not the only song of its kind that I could have added to the list at this point. The name of the band is Thrashfire, the name of the song is “Chainsaw Metal“, and it comes from the band’s most recent EP — Vengeance of Fire — which was released by Dave Rotten’s Xtreem Music label on December 20. To repeat what I wrote when I first found the song:

“The riffs in this thing are solid gold, except they’re so heavy and vicious that maybe it’s better to say they’re solid uranium. And the song includes vocals that are just as hellish and deranged, as well as some cool bass work that becomes especially noticeable when the band switch riffs after the halfway point. And to repeat, this thing is as contagious as influenza.”

Try to sit still to this — I dare you.