Eventually, I’m sure Absu would have popped into my head as a subject for one of these Sunday look-backs at metal from years past. But it happened sooner than later because of the announcement a few days ago that Absu would be embarking on their first full American tour since 2013, with stops in 42 cities — preceding the expected release later this year of their new album Apsu. If you want to check the schedule, scroll to the end of this post.

Apsu will be this North Texas band’s eighth studio album in a career that goes back to 1991, and their first one in six years. It completes a trilogy that began with Absu and Abzu. It will be interesting to hear what the band have concocted for this album. It will also be interesting to see the artwork of the very talented Polish artist Zbigniew Bielak, who we’re told has created separate covers for the CD and LP formats, as well as eight individual art pieces based on the album’s lyrical components.

But the point of this post isn’t to speculate about the next album, it’s to scatter a few tracks from the past. 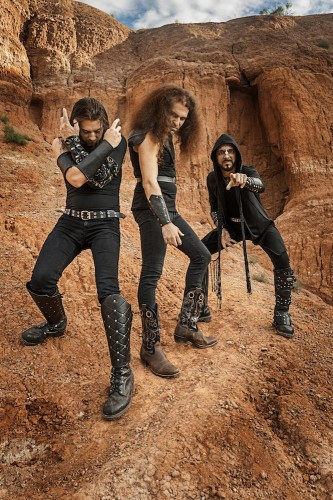 The band have had some multi-year breaks in the past due to a variety of circumstances, including line-up changes and injury, with vocalist/drummer Proscription McGovern devoting himself to other musical projects off and on over the years, and the albums I’ve heard (which is fewer than all of them) haven’t followed an identical set of blueprints as those albums have unpredictably appeared. However, it seems you can always count on plenty of songs that are going to fly at jet speed — with big doses of idiosyncrasy along the way.

Although the band’s releases haven’t followed any regular schedule, there’s no doubt that Absu draw significant attention whenever they do produce something new. I think it’s fair to say that they’re one of the United States’ best-known and most respected black metal bands, and they’ve released some stellar material over their long career.

To give some sense of the band’s progression, without throwing a dozen or more tracks at you, I’ve included in this playlist part of a very early rehearsal tape called Return of the Ancients (1991); a song from their 1993 debut album Barathrum: V.I.T.R.I.O.L.; a track from 2001’s Tara (which most people seem to regard as their masterpiece); two divergent songs from Absu (2009); and a speed demon of a song from their last album, 2011’s Abzu, as kind of a stepping stone to whatever the band will bring us with the new album.

You can find the tour dates below the YouTube streams.

6 Responses to “THE REARVIEW MIRROR (ABSU)”