I think it’s normal to be a little suspicious of any artist or album that’s receiving nothing but positive (often overly so) reactions from the Metal press. Heck, I think I know enough about the “scene” these days to have a good idea of which publications still retain their integrity and impartiality (such as it is)… and which ones don’t… and think I have a pretty good sense of when a review was clearly pre-planned and effectively written out even before the writer heard the album. Such things come with the territory.

But I’m here to tell you now that the praise being flung Obscura’s way for their new album Akróasis? It’s all very much deserved. 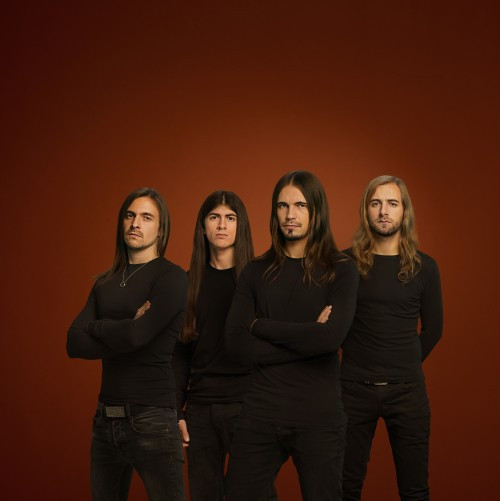 It would be easy (and incredibly tempting) to kick off the main body of this review with some pretentious spiel about the deeper meaning of the album’s title (the Greek term for “hearing/listening”) and how that relates to the band’s effective rebirth following a nearly five-year absence from the frontlines.

Similarly it would be just as easy to focus in on the major (and, until very recently, ongoing) line-up changes that were the main cause of that absence… but I’m sure you’re going to read enough about those things elsewhere as it is.

So, instead, I’m just going to focus on the music alone, the way it moves, the way it grows, the way it twists and turns and ebbs and flows, and the way in which the whole package is probably the most outright progressive and cohesive album ever put out under the Obscura name.

Like all the best openers “Sermon of the Seven Suns” sets the tone for the rest of the album – all high-energy, high-intensity riff-work and fluid, fluctuating bass lines, backed by some impressively nuanced and high-octane drum work courtesy of new sticksman Sebastian Lanser (who steps in here to fill the massive shoes of Hannes Grossmann, adding his own signature flair without stressing or straining to live up to his predecessor’s legend), with the whole package immediately feeling somehow looser and more expressive than the precisely targeted technicality that guided previous albums.

Though some tracks are certainly heavier than others, and some tracks more overtly progressive in nature, the album as a whole continues in the same direction established by “Sermon…”, feeling somehow more consciously and creatively unbound than its predecessors. And though it’s perhaps not quite as immediately infectious as Cosmogenesis or as structurally dense as Omnivium, it’s still packed full of more esoteric melodic hooks and jolting, heaving riffs than you can shake a stick at… only now there’s an even greater sense of subtlety and depth at play than ever before.

The fretwork across these eight tracks, though as scorchingly complex and technical as ever, simply seems more freeform and exploratory in nature, less confined by specific dogmas and demands, allowing both guitarists (mainman Stefan Kummerer and the now-departed Tom Geldschläger) to throw caution to the wind and incorporate a host of unconventional twists and unexpected turns into every whirling dervish conjuration of riffage, with even the (relatively) straightforward Tech-Death torrent of “Fractal Dimension” capable of throwing in a surprisingly proggy deviation from the norm when you least expect it.

Of course, both men are aided and abetted in their task by the scene-stealing performance of uber-bassist Linus Klausenitzer, who threads his way nimbly through the chaos and confusion to fill every available nook and cranny with clever touches of his own signature fretless magic (see the title track for a prime example, though the man’s impressive sonic fingerprints leave a distinctive mark across the length and breadth of the album).

Now whether this sense of creative freedom comes from Kummerer electing to loosen the reins and cede a greater share of the songwriting to other members or not, we’ll probably never know for certain, but there’s an irrepressible energy and a sense of … dare I say, fun… to songs like the mental overload of “Ten Sepiroth” and progtastic penultimate track “Perpetual Infinity” (whose second half in particular really goes for broke in terms of bold, expressionist fretwork) that acts like breath of fresh air in a genre all too often undone by its own over-calculated complexity.

That’s not to say that, in the midst this smorgasbord of progressive delights, Kummerer and co. have forgotten that they’re a Death Metal band at their core, as each song still brings the heaviness with gusto. However, special credit must be given to both “The Monist” and “Ode to the Sun” for seamlessly switching the emphasis onto their churning, Azathoth-ian riff work without losing touch with the proggy astral plane from which the band draw so much of their intricacy and identity (the cosmic choir on the latter in particular offering up a brilliantly realised contrast to the song’s darkly menacing intensity).

Of course, it would be remiss not to mention the album’s prodigious finale, the ambitious progstravaganza that is “Weltseele”, where the duo of Klausenitzer and Geldschläger (the primary architects behind this mammoth endeavour) really get to cut loose and flex their progressive mental muscles in thoroughly ostentatious fashion. By taking the essential elements of the band’s sound and expanding them towards new horizons, “Weltseele” both demands, and rewards, your full attention for its full fifteen-minute run-time, whether engaged in a slow burn of soft, almost ballad-like acoustic string work, drifting through a series of proggy, orchestral ambient synthscapes, or lurching violently from jackhammer riff to jackhammer riff in crushing succession.

More atmospheric and even more melodically and structurally adventurous than the rest of the album, it functions both as a final chapter to the book of Akróasis and as a stand-alone novella in its own right, with its distinctly idiosyncratic riff patterns, mind-bending lead work, and flowing, liquid-metal drumming all ultimately coalescing into one vividly unforgettable climax that thoroughly justifies every odd choice and unconventional risk the band have taken.

So the big question is… is it their best album yet? I suppose that’s going to depend on who you ask. For me though the answer is emphatically yes.

Whether it’s the greater melodic freedom or the more natural sense of flow and progression, this is an album that expands both the band’s creative palette and the scope of their vision in a way that never feels forced or artificial, but rather feels like Kummerer and co. are finally letting the music lead them, rather than the other way around.

And if that makes sense to you, well, you just might fall in love with this album as much as I have.