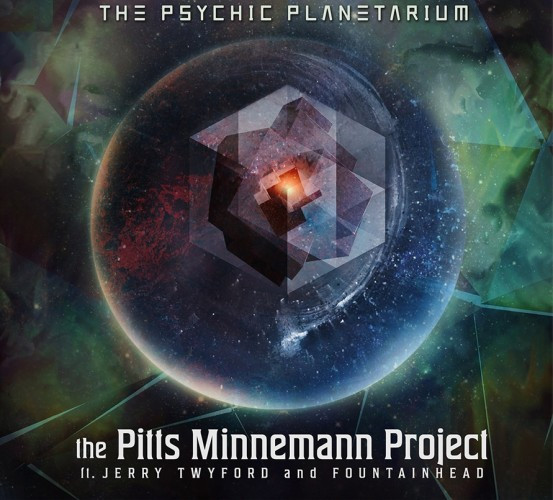 For those unfamiliar, the Pitts Minnemann Project has been kicking around with various line-ups for a while now. It’s safe to assume that even for people new to the group, they know the key players involved. It all starts with keyboardist/pianist extraordinaire Jimmy Pitts (Spastic Ink and countless others) joining forces with world-renowned drummer Marco Minnemann (formerly live for Necrophagist, The Aristocrats, and many others) to create experimental prog fusion music. Over time they’ve added more players with each subsequent release, leading to their latest full-length, The Psychic Planetarium.

With The Psychic Planetarium, they’ve brought in renowned guitarist Tom “Fountainhead” Geldschläger (ex-Obscura, and more) on both fretless and fretted guitar, as well as their longtime friend, bassist Jerry Twyford (ex-Scholomance) who has worked with Jimmy Pitts numerous times up to the present.

Together these four incredibly versatile musicians collaboratively wrote a pretty damn incredible album on The Psychic Planetarium, though as Tom told me, a few of the compositions were crafted solely by Jimmy, such as “The Guide”, “Of Colors, Spontaneously”, and album closer, “A Faint Beautiful Glow”.

As I briefly mentioned earlier, this is a prog/fusion-focused record, one that is totally instrumental, and yet breathes plenty of beautiful fresh life into this type of sound, with help in doing so from the contributions of guitarist “Fountainhead” and a bevy of guests such as: Jim Shannon on trumpet, Joshua Tomson playing saxophone, and violinists Joe Deninzon and Matthias Alexander Preisinger.

To say this is a fresh voice in the fusion-oriented prog music realms almost seems like an understatement, given the incredible nature of the music on this album. And I say that as a longtime fusion/prog fan, well aware of the all-time greats in the field, ranging from Return To Forever to Mahavishnu Orchestra, and many others.

The Psychic Planetarium is a really special record, and we are proud to share it with you ahead of its initial digital release on March 11th. Due to a delay at the pressing plant, CDs will come later but can still be pre-ordered through Indiegogo: