Long-time followers of our site will be familiar with Nick Vasallo, but for newcomers in the audience, he is the lead vocalist and songwriter for the excellent technical death metal band Oblivion — and he has a Ph.D. in Music, he is the Director of Music Industry Studies at Diablo Valley College and Artistic Director for Composers, Inc., and he is a composer of contemporary classical music whose works have been performed internationally.

When last we featured him in these pages (here), the subject was a video for an experimental composition named “Inches From Freedom” performed by the guitar-and-drum duo known as The Living Earth Show (Travis Andrews and Andrew Meyerson) and two clarinetists — John McCowen and Gleb Kanasevich (yes, THE death metal clarinet cover guy). 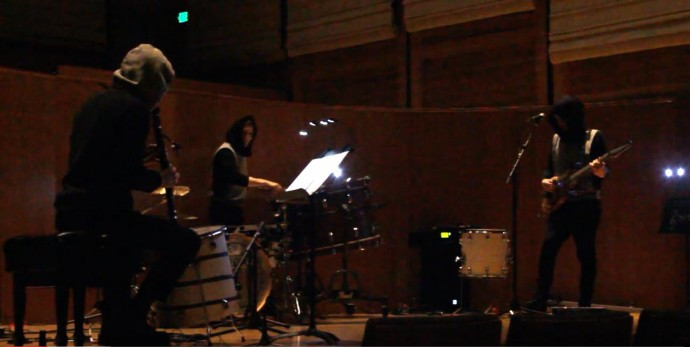 “Part I” was originally titled “East-West Doom Test”, reflecting both the bi-coastal locations of the two clarinetists and the composition’s integration of classical experimentalism and sludge/doom metal. The music is heavy, vibrant, and fascinating — and the video is just as fascinating to watch as the music is to hear.

Surrounding the Earth plan to record a full-length album and to perform live, presenting a stage production “in spaces not traditionally friendly to classical music: the punk and metal clubs in which Vasallo originally spawned his musical language”.

And with that, I leave you the debut of “Part I” by Surrounding the Earth:

3 Responses to “AN NCS VIDEO PREMIERE: SURROUNDING THE EARTH — “PART I””