Despite the fact that it’s a Sunday, we’re going to have at least three new posts on the site today, beginning with another installment of this series in which we reflect upon metal from yesteryear. Our focus for this edition of The Rearview Mirror is the NY death metal band Mortician.

While many of the bands we’ve remembered in this series are long gone, Mortician aren’t officially dead yet, though more than a decade has passed since their last album. For most of their career they existed as a duo, originally formed by Will Rahmer and Roger Beaujard in 1989 under the name Casket but soon re-named Mortician in honor of the late Angus Scrimm’s character in the 1979 horror movie Phantasm and its sequels.

This isn’t going to be a retrospective on Mortician’s discography. I simply want to play for you the band’s 1996 debut album Hacked Up For Barbeque, which was discharged following a hand-full of short releases. I hadn’t thought about the album in eons, but a conversation on Facebook yesterday reminded me of it, and I impulsively dived back into it. 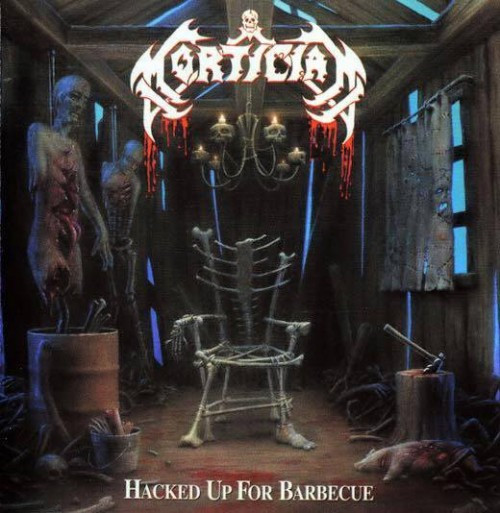 In its own ugly, primitive, brutish, and perverted way, this album is a death metal classic. In a way, it might also have become an albatross around Mortician’s neck because it’s hard to think of how they could have improved upon its peculiar charms without losing what makes the album special. And when I say that, I mean to include the drum machine.

Many years later Mortician did finally enlist a human drummer to give their music more of a live experience, but there’s something about the mechanistic sound of the drums on Barbeque that makes the music even more cult when set against the foul abrasion of the bass and the monstrous horrorshow of Beaujard’s riffs and Rahmer’s vocals.

As is often the case, the authoritative autothrall (From the Dust Returned) nailed it in his review of this album, and so I’m going to quote a few paragraphs here and then launch the full album stream to help make your Sunday both more miserable and more invigorated:

“Hacked Up for Barbecue was the first proper full-length recording after a trio of cult EP predecessors, to which it stylistically adheres, though the production is taken to a new level. The low-tuned, pummeling palm muted grooves hail from a convocation of early grindcore (Napalm Death, Repulsion and even Carcass) influences and a dash of Hellhammer’s infernal darkness. Sodden, cheapened death/thrash sequences very often erupt in the midst of some loping, roiling chassis, and there are numerous occasions of accelerated tremolo picking which is sure to honor Mortician’s Floridian forebears like Obituary or 80s Death. All of this is enveloped in a muscular tone with a lot of bite to the mutes, to the point that even the simplest and familiar riffing sequences experience a new sense of grave-dirt richness. But perhaps more distinguished is the speaker rupturing bass sound, soaked in so much distortion that it sounds like static in a submarine, or like mud being slowly churned into a fine paste. If you’ve experienced a lot of noise music, Rahmer’s tone is very much compared to much of the low-end filtering that often occurs. It’s not impossible to follow his note configurations, which generally mirror the guitar, but it adds this real sense of ominous sickness to the mix.

“The drums on this and many Mortician records have been programmed by Beaujard, but their hostile and mechanical nature has somehow always worked within the context of this very unnatural songwriting. The combination of these soulless beats with the mucky bass and depraved guitars often recalls industrial greats like Godflesh, but this comparison ends with Rahmer’s monotonous, low-end barbarian growls, which could probably be attached to some sonic voice and used to burst kidney or gall stones. There’s not much variation here, a fact that often draws the ire of many listeners, but Rahmer’s inflection is so flush with the surrounding guitars and bass-lines that I just couldn’t imagine it any other way. He is what he is, and he’s never pretended otherwise. Their effect might come off sillier than, say, Craig Pillard’s stint with Incantation in the early 90s, but there’s no question that they provide most of what we’d consider ‘atmosphere’ to this music. If there were a lot more than an occasional rasp or scream, for example, it likely wouldn’t possess that same, thuggish charm or consistency.”

One Response to “THE REARVIEW MIRROR (MORTICIAN)”