After the first two albums by Terra Tenebrosa — 2011’s The Tunnels and 2013’s The Purging — the arrival of a new album is like the mysterious appearance of an intricately carved box in a puff of indigo vapor. The strange sigils and runes seem to shimmer of their own accord in the gnarled, leaden wood. What lies within becomes a matter of intrigue. You can be fairly sure that the contents will be dark, disturbing, and otherwise dismissive of genre boundaries, but beyond that it’s difficult to foresee what the alchemical processes of The Cuckoo’s art have rendered.

The new album is named The Reverses and it will be released on June 17 (June 22 in North America) by Debemur Morti. The significance of the title and its connection to the albums that preceded it have yet to be revealed. What has been revealed so far is a lyric video for a song called “The End Is Mine To Ride”, and today we’re helping to share a stream of a second track, “Ghost At the End of The Rope”.

In this new undertaking, The Cuckoo seems to have worked alone as the sole member of Terra Tenebrosa, but the album also features appearances by some notable guests: Jonas A Holmberg (This Gift Is A Curse), Alex Stjernfeldt (The Moth Gatherer), MkM (Antaeus, Aosoth), and Vindsval (Blut Aus Nord).

“The End Is Mine To Ride” (which you can hear below along with the newer song), was a menacing and uneasy introduction to the album, and yet the music’s driving beat, dissonant waves of guitar noise, and eerie arpeggios were magnetic; the song proved to be highly infectious as well as eldritch and hair-raising.

“Ghost At the End of the Rope” hammers like an industrial assembly (or disassembly) line, clouded with noxious smoke and lit by the flash of sulfurous sparks. Queasy arpeggios flicker through the miasma of piston-driven rhythms and guitar abrasion. The Cuckoo and guest vocalist Jonas Holmberg cry their lyrics in a twisted mix of vile gagging and goblin snarls. The song ends in spectacularly unsettling fashion, with a wash of eerie and jarring ambient sounds and disembodied voices.

While the album can still be considered a container of mysteries, it’s beginning to seem that it is a Pandora’s box, one filled with terrors, or perhaps simply portals to tunnels down into the darkest and most depraved corners of the soul. 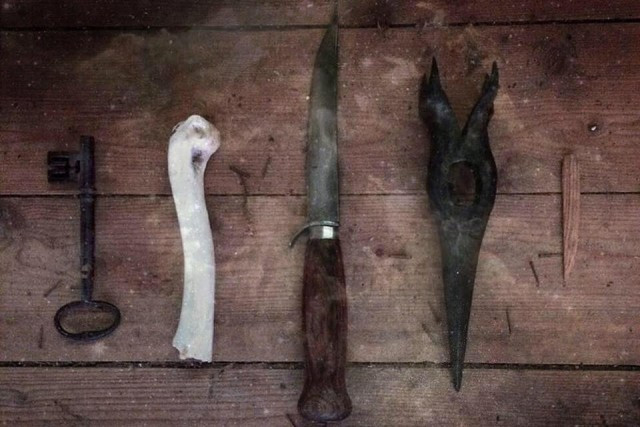 The Reverses was recorded and mixed by Terra Tenebrosa and mastered by Karl-Daniel Lidén. The album art was created by Jonas A. Holmberg. The track list is as follows:

4 Responses to “AN NCS PREMIERE: TERRA TENEBROSA — “GHOST AT THE END OF THE ROPE””