Zeal and Ardor is the name of a music project based in New York City. I’m calling it a “project”, because I have no idea who is behind it, or whether it’s the work of one person or more than one; I’ve searched and can find no background information at all. This mysterious project released a self-titled album in June 2014 that I did not know existed, and in mid-April of this year they released a second one named Devil Is Fine — which is unlike anything I’ve heard before.

The sheer ingenious novelty of the musical ideas is itself worth applauding, and the quality of the execution demands even louder applause. I suppose you could think of the songs on Devil Is Fine as “mashups”, in the sense that they fuse together a bewildering array of samples and stylistically diverse original recordings to produce music that’s wildly surprising, and wildly successful.

There are, of course, metal elements in some of these unusual hybrids or I wouldn’t be featuring the album here — primarily blackened riffing, double-bass and blast-beat fusillades, and caustic shrieks. But the other ingredients include Negro Spirituals (a category of music that’s still so-labeled despite the abandonment of “Negro” in modern parlance), EDM, piano chords, keyboard whirlwinds, xylophone melody, jazzy stand-up bass and drums, a bluesy guitar solo, snatches of auto-tuned pop vocals, Middle Eastern wailing, rapid-fire guitar jabbing, chants, what sounds like a mellotron, and the kitchen sink. No two songs are exactly alike, which makes the whole album run-through a real trip.

Also, I’ll say that I have no confident idea where the samples stop and the original music begins. The whole thing could be nothing but a creative amalgamation of pre-recorded samples, I suppose, or most of it could be original. Maybe someday we’ll find out the who, what, and why of this thing (curiosity is killing me).

(I’m indebted to both Jon Rosenthal and our man Leperkahn for FB statuses that alerted me to this album.)

UPDATE:  After writing what you’ve just read, I renewed my search for more information about this project and identified both the name of the artist — it’s one man named Manuel Gagneux — and a Facebook page, and an interview, both of which I’ve linked below. And it seems from the interview and comments on the FB page that Manuel did all of this himself, including the vocals in the spirituals. That makes this album even more remarkable than I thought. 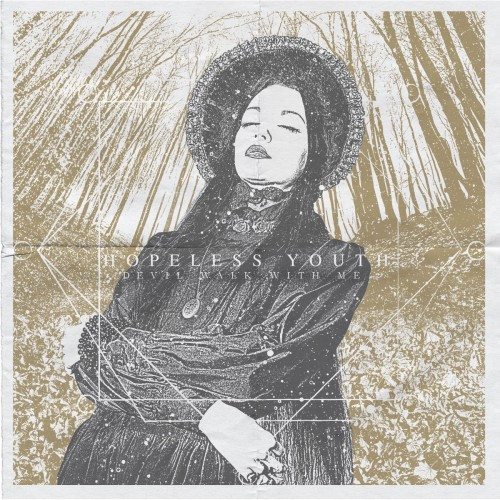 I’ve been sitting on this next EP for many weeks, waiting for a good time to shower it with praise, and now the day has finally arrived, in part because I can’t resist following an album named Devil Is Fine with one named Devil, Walk With Me. The name of the band is Hopeless Youth, and they clearly got their wish — the devil most certainly has walked with them on this EP.

By way of background, Hopeless Youth make their home in Montreal, Quebec. Their debut album Disgust was released by Candlelight Records in 2014 (available on Bandcamp here), and since then the band have condensed from a five-piece to a four-piece for this new EP.

The songs on the EP are tremendously hard-hitting and supercharged with feral energy and raw fury. They combine brute-force hardcore heft and caustic blackened shrieks, with head-whipping riffs that are damned catchy, gravel-crunching bass lines, and a convincingly murderous intent. Even when the band back off of their generally rampaging pace in the EP’s middle song, “Moon Child”, there’s no real reprieve from the wrecking job; it oozes despair and disgust. And it’s quickly followed by the crust/grind mauling of “Light Bearer” anyway.

With the aid of the devil, Hopeless Youth have produced a dark, vicious, body-moving adrenaline rush.

Devil, Walk With Me was released in mid-April on 12″ vinyl by Rainville Records and digitally by Pluto Records, and it’s available from the band as well.

As previously reported here in late May, the band Thrawsunblat have a new album named Metachthonia that’s scheduled for release on June 17. For those who may still be unfamiliar with the band, it was founded by two members of Woods of Ypres, David Gold (drums) and Joel Violette (guitars, vocals), who recorded the debut album in 2010. With Gold’s tragic passing, Violette forged ahead with bassist Brendan Hayter (Obsidian Tongue, ex-Woods of Ypres) and drummer Rae Amitay (Immortal Bird), and that line-up recorded the second album, released in 2013. The same trio are responsible for the new record.

In that previous May post, all I had to share with you was a teaser reel of song snippets, but in recent days the band have unveiled a complete song — which turns out to be a long, multifaceted marvel. It’s called “She Who Names the Stars”.

The music has a pronounced rainy-day atmosphere, but when the vocals soar in the chorus you can feel your heart soar as well, and when the riffing starts to slash, the drums begin to blast, and the morose clean vocals turn to jagged snarls, your pulse will quicken. There’s a heart-aching violin melody in the song, too, helping to etch more fragments of forlorn beauty into your memory in a song that also carries its fair share of despair. 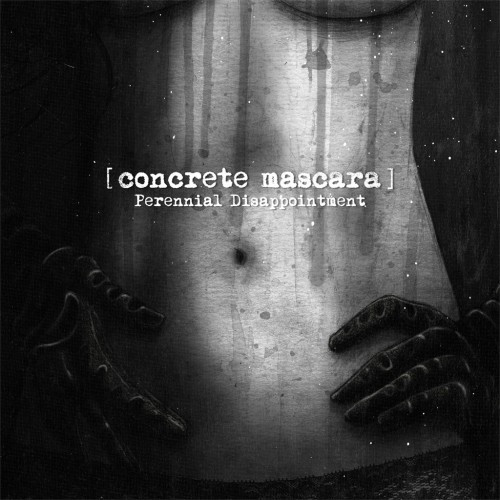 For those who’ve been followed the series of NCS posts prepared by Todd Manning (aka Allen Griffin) with a focus on power electronics and harsh noise, the name Concrete Mascara will be a familiar one. In the third installment of that series in late May, Todd featured the new release from Concrete Mascara titled Perennial Disappointment, which was then due for release by Malignant Records, commenting as follows:

“This New Jersey trio concocts a truly punishing collection sure to entice any fan of modern Power Electronics. They cover a lot of ground here, from subtle and menacing Death Industrial moments to out-and-out eardrum-piercing shards of skree. Vocals sometimes gnash their way out from beneath the blankets of noise, screaming to be heard. The whole thing sounds like the dying gasp of humanity in some sort of post-apocalyptic nightmare.”

With that preamble, I’d like to spread the word that today is the release date for Perennial Disappointment, and therefore we now have a full album stream to share with you (as well as a link for acquiring the music). Gird your loins and give this a listen: 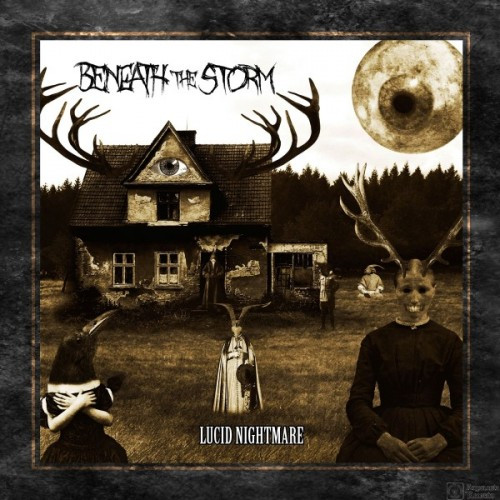 This next item is an advance song by a Slovenian sludge/doom band named Beneath The Storm from the album Lucid Nightmare, which is planned for release on July 4. I saw a link to the song on Facebook about 10 days ago, and happened to have a few minutes to spare for listening. It put me in a headlock immediately, and I’ve found myself drifting back to it again and again since then.

The song that grabbed me is the new album’s title track. The tectonic, steamrolling riff that launches the song just hammers its way into your head relentlessly, while the vocalist sends his scarred, wailing voice up into the clouds (while a backing vocal track adds roars of agony). This thing is really fucking heavy, really fucking bleak, really fucking evil, and really fucking hard to forget.

Lucid Nightmare will be released by Argonauta Records, and it’s available for pre-order here: 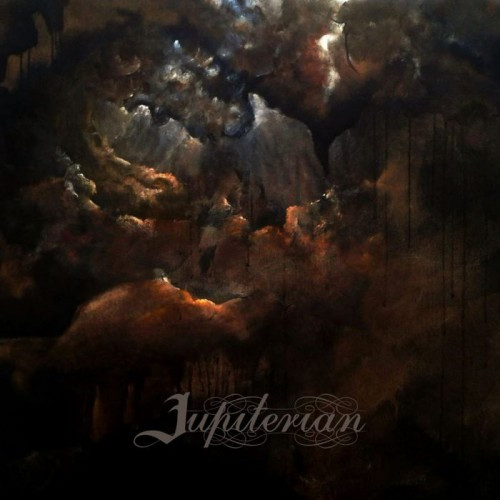 To close out the first part of the new-music round-up, I have for you some new sounds from the titanic Brazilian doom/death band Jupiterian. The band’s last release was last year’s stunningly heavy full-length, Aphotic. But just a couple of days ago CVLT Nation premiered a new Jupiterian single — a cover of the song “Mine Is Yours To Drown In (Ours Is the New Tribe)” by Anathema, off their 1995 EP Pentecost III.

If you’re new to Jupiterian, I’ll warn you that this song fully displays their ability to club a listener senseless. Their take on this song renders it in stark, desolate, and devastating tones, with deep, gruesome gutturals adding to the music’s savagely hopeless aura. The intensity climbs, and your head will start moving as it does, but it ends in a soul-sucking collapse, like a sinkhole opening in slow motion beneath your feet.

This new recording was mixed and mastered by Maurice de Jong (of Gnaw Their Tongues, among many other projects) and is adorned by a wonderful painting by Cauê Piloto. I don’t yet know how the music will be released and distributed.

UPDATE!  Jupiterian have now made this song available for download on Bandcamp (name your own price).