Last month I raved about the album’s first advance track, “Ordained In Bile”, and I’m about to start raving again, because we’re bringing you the premiere of a second song from this staggering new album: “Magic & Muhr“. 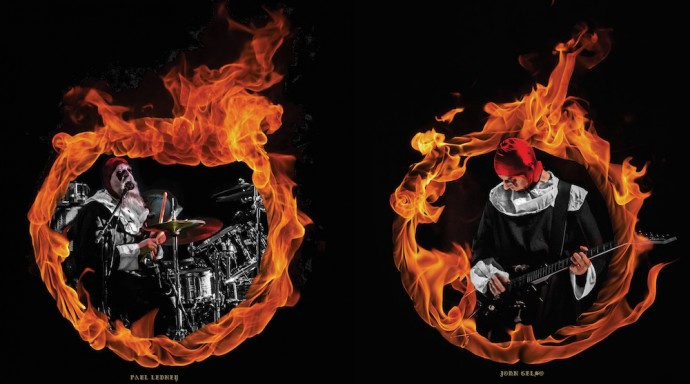 I was fortunate to be given my choice about which track to premiere, and I chose “Magic & Muhr”, not only because it’s one of my favorites on an album that’s brimming with great songs, but also because it is such a good example of Profanatica’s ability to create atmosphere and to ensorcel listeners while at the same time making an almost physical impact with the primal striking power of their sound.

And to be even more specific, one of the aspects of the song that really grabbed me (and hasn’t let go) is the way it begins. For the first minute and a half, the music is dominated by the enormous booming sound of the drums, the crash of cymbals, and the pavement-gouging rumble of the bass, eventually joined by the protracted vibration of ominous chords. Following that slow, spine-shaking start, Ledney locks into a  compelling drum rhythm while Gelso’s guitar begins to simmer and seethe, augmented by Ledney’s ghastly howls, together generating the sound of pestilence and imminent death.

The song builds in intensity, gradually ramping up the pace, ratcheting the tension with a flickering lead guitar arpeggio, like winding a giant spring around your neck… with no release. And the whole experience proves to be mesmerizing; the melody in the song is morbid as hell, but it’s also very catchy. And the bone-splintering impact of the bass and drum is unceasing.

Profanatica’s music is often characterized as primitive, and there is indeed a simplicity to the moving parts of the song. But the fact that it makes such a strong and lasting impact is a testament to Profanatica’s mastery of their primal craft.

The album can be pre-ordered in various formats here: