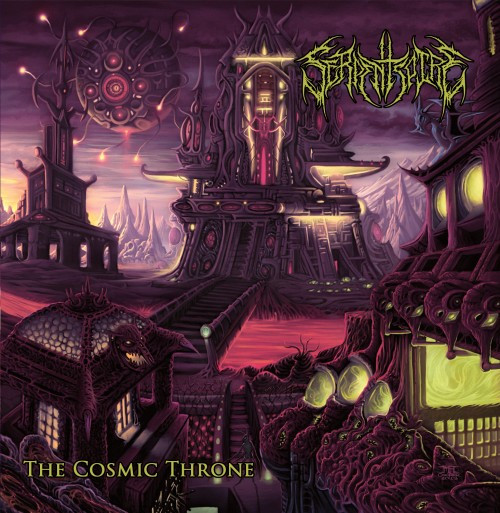 On Friday of this week — July 8 — Transcending Records will release the official CD edition of The Cosmic Throne by Serpentspire from Spokane, Washington, and we’ve got the premiere of a full stream right here.

Those of you who are already familiar with the band may recognize The Cosmic Throne as the name of a demo that Serpentspire self-released last year (perhaps by happening upon our own DGR’s enthusiastic review of said demo last July). But the EP that’s being released on July 8 is a re-recording of the songs from that demo by a revised Serpentspire line-up that now includes the return of original vocalist Shawn Taylor as well as new guitarist Damon Koenig and new bass-player Nathanial Fennen, in addition to drummer Ian McKinney and guitarist Zach Lavelle. 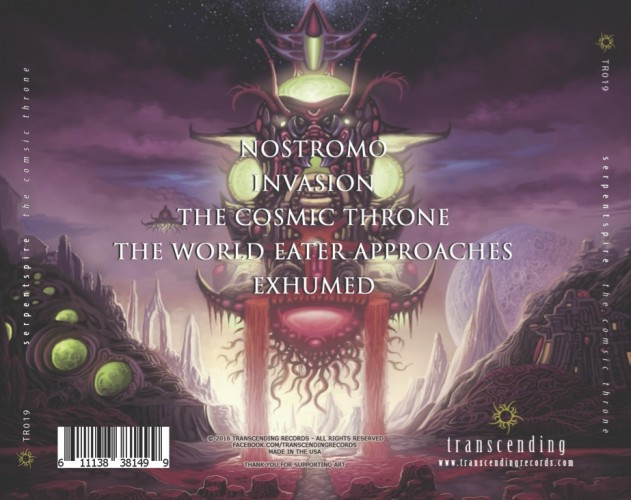 Some things haven’t changed despite this new line-up and re-recording of the songs: Thematically, the songs are still devoted to space and science fictional themes — and the band are still blisteringly fast, technically eye-popping, and  borderline demented in the arrangement of their frenzied activities.

With Shawn Taylor alternately growling, bellowing, and shrieking, the guitarists behind him twist, turn, dive, dart, swarm, and engage in vicious brain drilling with almost reckless abandon. The rhythm section is equally turbocharged and almost equally crazed, but more brutal in their pugilistic flurries (despite the warmth achieved in the fretless bass tone).

This is one of those song collections that achieves an unearthly ambience through the brain-scrambling, insectile machinations of what seem to be hyper-accelerated off-world xenomorphs, part machine and part biological in their composition. But the sense of being rocketed off into space in the company of carnivorous alien beings is enhanced by the insertion of strange, gloomy, off-speed sections, as well as a multitude of turn-on-a-dime tempo changes.

If you’re hungering for technical death metal that’s maddeningly inventive as well as brutal and frighteningly fast, jump below and press play. It will leave you breathless and brain-scrambled.

2 Responses to “AN NCS EP PREMIERE: SERPENTSPIRE — “THE COSMIC THRONE””