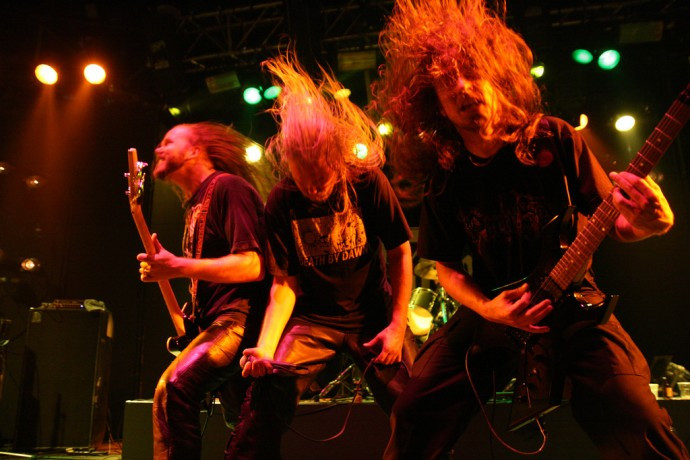 (Andy Synn prepared these meditations on why he listens to metal.)

Like most of you (or so I’m assuming for the purposes of this column) the above question is one that I was, for a long time, quite intimately familiar with. And though I tend to hear it less frequently nowadays than I used to, variants of it still crop up now and again:

“How can you listen to that stuff, it’s just noise?”

“It all just sounds the same!”

And, as much as I’m occasionally tempted by the knee-jerk, involuntary reaction (“YOU JUST DON’T UNDERSTAND!!!) I’m not an angst-ridden teenager anymore… I’m an angst-ridden adult, and thus far more willing to engage with these sorts of questions and statements, and try to understand where they’re coming from.

Plus, it’s actually a good question… why DO we listen to Metal?

I guess to answer that, you have to be willing to engage in some serious introspection, as well as some honest-to-goodness critical thinking about this genre that we love so much.

Although if that’s too much to ask, I understand. Please close your browser and go back to listening to [insert band name here].

Now, obviously what I’m about to say purely applies to me personally. I’m not trying to claim my experience(s) is/are universal, nor do I speak for the rest of the staff (regular or irregular… though I suppose we’re all pretty “irregular”) here at NCS.

But, if what I’m about to say makes sense to you, if you find yourself reading the following paragraphs and thinking “yeah, that sounds just like me”… you might want to consider getting professional help.

Anyway, one of the common reasons I hear bandied about as to why people listen to Metal over other genres is because it’s more “honest” and more “real”. And though there’s definitely something to that, it’s still a bit too much of a sweeping statement for my liking.

I mean, yes, I love Metal for its integrity. When an artist really means something… you can feel it. That emotion, the righteous indignation… the rage, the pain, the sorrow… it seeps out of your speakers like an almost physical thing.

But that’s not to say that all Metal is like that. There’s definitely acts out there (naming no names) happy to fake it, happy to pander to their audience with a calculated facsimile of real emotion. You can probably name quite a few of them off the top of your head.

Not only that, but to say Metal is the only “real” or “honest” genre is both insulting to other genres, and patently false.

Of course, when most people say things like this they’re usually, consciously or unconsciously, comparing Metal to the generic plague-mass of “Pop” music they see on TV and hear on the radio, which isn’t exactly setting a high bar. And lumping every other style or genre in with this isn’t exactly fair either.

It’s a comparatively rare phenomenon, it’s true, as the “Pop” music industry is, well, exactly that… an “industry” based around the conveyor-belt creation and marketing of music as a “product” for easy consumption… but it does happen.

So yes, Metal’s integrity and honesty is certainly something to be lauded, and certainly one reason why I, personally, love it so much. But it’s not the only reason, nor a sufficient explanation, for why the genre appeals to me above all others.

Connected to the above issue is the idea of Metal as the most cathartic of genres, and this one definitely has something to it as well, though it’s clearly not the only one capable of offering its audience a unique form of emotional release.

Of course, there’s a subjective element to all this – neither you nor I can say that the person weeping along to the latest post-break-up power-ballad is necessarily experiencing an emotion that’s any less real or any less raw than the one we feel when listening to My Dying Bride (although there’s more hay to be made when questioning which of the two artists offers more depth of thought and feeling) – but there’s definitely something to the assertion that Metal can offer a uniquely cathartic experience to its listeners, as it’s one of the few genres that seems able to communicate, and articulate (amongst other things), the sheer rage and fury and frustration of human existence.

No, it’s not entirely alone in that respect (I would argue, for example, that there are strands of Hip-Hop which are just as furious and nihilistic as even the nastiest Black Metal and that one man with an acoustic guitar and a fire in his heart can write a protest song every bit as angry as even the most ferocious of Grindcore), but whereas so much of “popular” music seems to deal in such a limited emotional spectrum, Metal – for me at least – spans a much wider range of emotions.

There’s Metal that makes me feel sorrow and anguish, joy and triumph, apoplectic rage and righteous indignation… Metal that deals with love and loss, pain and pleasure and pure, unreasoning hatred… all this and more. And though there’s often a move to dismiss these feelings as “teen angst”, or as primitive emotions (for primitive people), the very fact that Metal has such a wide scope is one of the things which drew me in, and one of the things which keeps me coming back, day in and day out, searching for new music and new expressions of real, honest emotion.

Ultimately, the reason I listen to Metal isn’t just one reason at all… it’s a combination of factors, some extremely complex, some… less so.

After all, there’s a simple joy in feeling that thrum of a cranked up, crushing guitar riff deep in your chest that practically transcends rational analysis.

But, if I WAS pushed to sum it up in one word, one statement that combines the reasons I have mentioned above with all those I’ve left unspoken, it would be… energy.

Yes, there’s a sense of vitality, of life, of pure and irrepressible energy to Metal which I just find missing in most other music.

Whether it’s the energy of aggression, or simply one conjured from the sheer speed, the sheer heaviness, and the sheer passion being put in by the artist, it’s this sense of energy, this sense of dynamism and unstoppable force behind the music which is at the root of my love for Metal.

From the slowest to the speediest, from the most melodic to the gnarliest, ugliest examples I can think of, there’s an animus to my favourite artists that just seems absent (or wholly artificial) in other genres.

From the generic “club bangers” to the commercialised “empowerment” of your average pop anthem, so much of what we’re exposed to, so much of what we’re sold, is written to a Pavlovian formula, one that’s been analysed and refined to perfection by teams of producers and hit-makers over the years, so that every song exists within the same carefully calculated dynamic range, and every listener starts salivating precisely at the same moment when they’re “waiting for the drop”.

It’s loud and brash and perfectly polished, don’t get me wrong. But there’s no energy to it. No life. It’s music by rote. Pumped out algorithmically to elicit a particular involuntary reaction. That’s all.

Don’t get me wrong, the same sort of thing happens in certain corners of the Metal world too. Those 70,000 interchangeable Thrash bands are playing those same variants on classic Slayer and Metallica riffs for a reason… they’re familiar, they’re formulaic, and they get a certain basic reaction from a certain type of listener. Of course, they may not have any of the spark, the fire, the energy as the originals, but they work – after a fashion at least.

Similarly, it’s why it’s possible for heavy bands to “go Pop” (or, at least, go “mainstream”) without trying to sound like Katy Perry – going Pop isn’t necessarily about trading in your guitars for go-go boots and synchronised dance moves, it’s about changing your style (sometimes a lot, sometimes only a little) purely to elicit this superficial Pavlovian response… you can keep your riffs distorted and keep on yelling all you want, but once you start playing the Pop game, and fitting your songs to the formula in order to “compete” on their terms… well, it’s a slippery slope from there in my opinion.

And this formulaic, intrinsic lack of any true sense of energy or vitality is precisely why Metal bands going “Pop” (I’m not going to say “selling out”) just doesn’t work for me. It simply robs the music of its life.

It’s why that new Astronoid album DOES work for me, despite (or, more likely, because of) how joyously and shamelessly melodic it is, but why the new Whitechapel feels completely flat and lifeless in comparison to their previous material, despite maintaining much of its heaviness.

You probably have your own reasons why you love Metal. Obviously I have more than just the one too (I could have gone on and on… but even I get bored of myself after a while). But right at the root of my love of Metal is the sheer energy it carries with it.

It’s why the most punishing of chugging Hardcore tracks can appeal to me in the same way as the most raging blackened blast-fest, and why the most ponderous Funeral Doom song can carry the same weight and momentum as the most dazzling of light-speed Tech Death shenanigans.

31 Responses to “WHY DO YOU LISTEN TO THAT STUFF?”