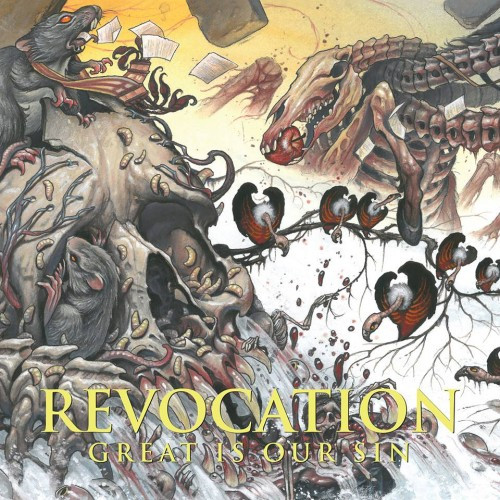 (We present TheMadIsraeli’s review of the new album by Boston’s Revocation.)

Sometimes regression is evolution. While I haven’t kept up with the press surrounding this album, my friends who have tell me that this is supposed to be Revocation’s most progressive record. It certainly, in my estimation, isn’t that at all in the conventional sense you’d suspect. “Progressive” is also a word that’s been pretty butchered in the world of metal. When we live in a world where TesseracT is considered progressive, that shows how much water the label holds.

Revocation’s Great Is Our Sin is interesting, in that it indeed contains elements that might be considered progressive (extreme amounts of stylistic inclusion/blending and nuance brought about by that inclusion), but the music itself isn’t really what I’d call progressive. It’s fantastic technical, thrash-driven death metal that switches gears among just about every variation on the style, and Davidson’s guitar playing in and of itself is certainly progressive in ways that perhaps could only be explained to other musicians or the super-musically-inclined.

Revocation’s music, especially on this record that follows Deathless, which was also played it very straight, is largely devoid of any sort of meandering, exploration, or head-turning twists. It’s all pure, unrestrained brutality and darkness with eccentricities sprinkled throughout. 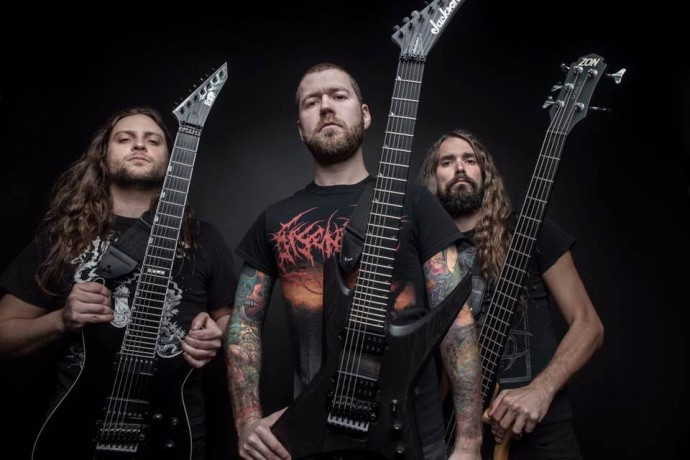 That of course begs the question of where Great Is Our Sin sits in the Revocation catalogue, and the answer is that this one is the closest to flawless they have yet come.

I’ve always loved this band, from Existence Is Futile onward, but I think that when the band released their self-titled (their third full-length) the more energetic, mostly thrash-driven direction was pretty burned out. The better songs on it were the more death-metal ones, and most of at least my personal metal-nerd friend circle agreed the album was good, but not Revocation good. My interest in the band was immediately stoked beyond my original intensity when Deathless came out, a more death-metal-focused, more old-school-designed approach that I think worked very much in their favor.

Great is Our Sin to me is more of this. It’s like the love child of Pestilence, Coroner, and Martyr with the intensity and marathon-running qualities of Dark Angel to maintain that thrash energy and edge. The full-time switch to seven-string guitars helped the band immensely, too. I usually don’t put stock in lowness of tuning, but the mammoth-sized riffs the band have been able to write since the transition have enabled them to counterpoint the sharp, precise thrash side of things in a way that’s given the band much-improved contrast.

This is also Revocation’s darkest album on the melodic spectrum. Every riff reeks of either sheer, imperialistic bleakness (“Profanum Vagus”), total fear panic and chaos (“Communion”,) or twisted abstract distortion (“Theatre Of Horror”) in a way that Deathless only began to touch on. Other songs like “Monolithic Ignorance”, with it’s more melodic-yet-still-twisted approach, contrast with the more violent, brutal moments of the album, like post-closer “Only The Spineless Survive”, which is a creeping battle tank of a song.

I think if there IS anything arguably progressive about the music, it comes through in David Davidson’s guitar playing. The way this guy blends together thrash, death, and black metal while pushing his obvious jazz influences in the particular way he does that is fascinating. No section of Revocation‘s music on the album is ever just a death metal part or a thrash metal part; it seems to always be all three, with variations in the degrees of how they’re distributed. This sort of consistent blending I think is something that’s just not common in metal, where you can usually tell apart the various sections and dissect exactly where they come. I don’t think you can easily do this with Revocation.

It’s really hard to write a nuanced review for Revocation in general, because the band is consistently great even at their lowest points. I just tried to approach this album with the question in mind of “where is the band going with this?”, and ultimately what you’re going to get is a fat-trimmed, very meaty, death-metal-focused record like Deathless but with more ambition. Definitely Revocation’s best album thus far.

Great Is Our Sin will be released on July 22 by Metal Blade and can be ordered here. Selected songs can be heard below, and a full stream is available here.

3 Responses to “REVOCATION: “GREAT IS OUR SIN””